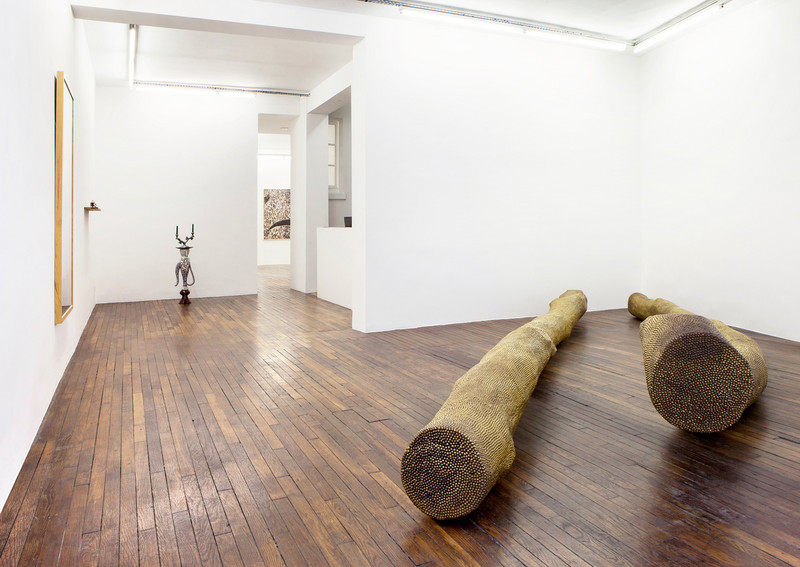 Art : Concept presents a new group exhibition that will run from the 13th December 2014 to the 24th January 2015. This show draws together and creates dialogue between the works of seven artists from the gallery: Martine Aballéa, Ulla von Brandenburg, Jeremy Deller, Hubert Duprat, Richard Fauguet, Vidya Gastaldon and Geert Goiris. As direct reference to Der Lauf der Dinge*, the exhibition’s title not only evokes the intrinsic collaborative character necessary to the development of a gallery, but also functions as an allegory of the construction of a gallery’s program. Artists represented by the gallery are chosen one by one, as the gallery’s life develops, and in apparent independence. Such an empirical construction, building itself up within a non-linear space-and-time lapse, does not follow any guideline, system or theory. However, in the long run, the ensemble ends up achieving the appearance of a coherent corpus. Like scattered bodies in the universe, re-assembling to form a planet, the chosen works communicate and interact, here adopting the form of an exhibition.

In the manner of an “ exquisite corpse ”, “ The Way Things Go ” plays at composing a common artistic project without letting its participants in on the others’ projects. Just as in Peter Fischli and David Weiss’s film, the unusual combination of diverse artefacts – whose diversity resides just as much in the nature of the pieces as in the choice of their supports (sculpture, installation, photography, collage on paper, painting) – highlights the logical chain that binds seemingly antithetic elements together, revealing lines of causality, thematic networks, visual and political correspondences. Hence, Hubert Duprat’s studded tree-branches (Coupé-Cloué, 1991/1994), sculptures of an almost totemic character, find resonance with Gert Goiris’s image of tree-trunk riddled with coins (Overgrown, 2014). This photograph shows a form that can be perceived as a face, the visage of an atlas or of a ritual mask and at the same time subtly points at the figure emerging from Richard Fauguet’s tube of Cajoline fabric-softener (Sans titre, 1999). Such a ceremonial and magical, almost mystical dimension can be retraced in Martine Aballea’s vials of “ dead poison ” (Poison Mort, 2013), as well as in the black wave that seems to unfold and invade Vidya Gastaldon’s Healing Painting (2014), like the appearance of a mental image on a painterly surface.

Another very significant work: the Monsters (2013), by Ulla von Brandenburg, is made of cut-out-images drawn from the German Carnival tradition of the Black Forest region. They feature all sorts of figures drawn from ancient pagan traditions: gods, demons, and sorcerers, wearing hand-carved wooden masks. The importance of folklore and its collective productions, as well as its popular celebrations is also one of the main features of Jeremy Deller and his Folk Archive project, which he set up as collaboration with Alan Kane. Between art-project and anthropologic research, this work is a quite accurate encyclopedia of Britain’s popular culture that produces a political discourse on the art-world. It bears a lot of similarities with the reflections that can be raised by the observation of Ulla von Brandenburg and Richard Fauguet’s works. It is precisely this constant oscillation, as a sort of aesthetical and intellectual gymnastics, that the present exhibition attempts to highlight.

Regardless of completeness, the exhibition could have included many other artists, reflecting the subjective dimension inherent to the elaboration of a gallery program. Embracing Heraclitus’s vision of time which he made to be relative and heterogenous : “No man ever steps in the same river twice, for it’s not the same river and he’s not the same man”, “The Way Things Go” leads us into an aesthetic adventure that will appeal to the culture and memory of each of us.