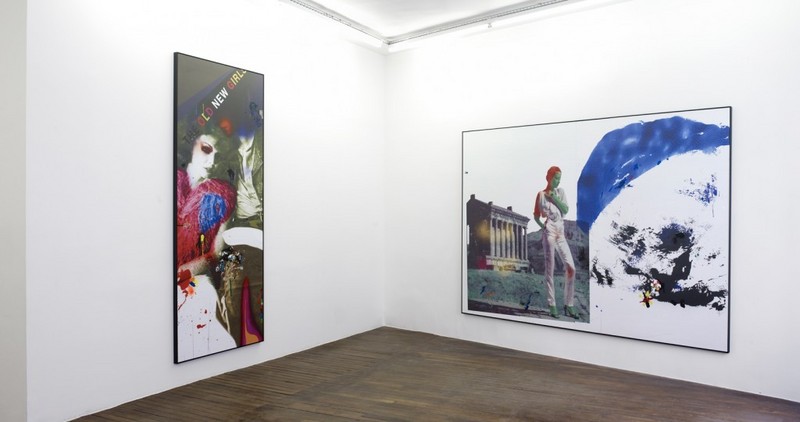 For his fourth solo exhibition at art: concept, Lothar Hempel presents a brand new series of paintings that mix oil-colour, crayon, collage, acrylic, print, stains, drips, scratches, sheddings, smears and splatters. These intriguing paintings are filled with unintentional signs that result from the multiplicity of the layers applied by the artist, who wants to take us on an adventure in an unknown story: The Story of The Old New Girls.
Who are they? On one of the painting, one can see a slender silhouette, her glance lost somewhere we don’t know. Is she a model? Does she come from the East? Does she live in the West? On another one a little girl from the Hmong tribe appears, hiding between the thick foliage of a forest that has the appearance of a luscious LSD trip; is she hiding from her harassing life in the golden triangle, growing an opium destined for the secret pleasure of the westerner who furtively looks at her? Is she living in a universe of decay, or is she just posing for an NGO, or a dream vacation advertisement?
Lothar Hempel draws his inspiration from German history as well as from Californian New-Wave, Greek tragedy, pagan culture, music and cinema. His interest doesn’t reside in references as such: taking images for what they are or for what they convey in contemporary western culture is not his main concern. Rather, he seeks a re-appropriation akin to a way of seizing reality to make it circulate in his universe.His works are densely emotional, and instead of relinquishing themselves from the start in the form of a concept, they make us face lost or forgotten memories which we feel we could recover from one second to the other, thus engendering a multiplicity of individual interpretative possibilities and creating paths between dream and reality. Lothar Hempel creates a cosmogony - complete with characters, objects and environment - in which verbal and visual intermingle and by which previously distinct media clash in an almost violent way.
Because Lothar’s paintings are objects that seem maltreated, reminiscent of urban vandalism. They seem to make references to publicity panels, but at the same time they have their own history and recurrences. For Lothar, these women, these Old New Girls, are a whole group that doesn’t belong to a simple one-time narrative. They have always been there, from the start, but they live and survive in a sort of constant reappearance. They are, he says: “As migrating birds that go from North to South in a permanent movement that is both nostalgic and symbolic of renewal.” Confirming Lili Reyneaud Dewar’s idea that «the work expresses live-forces that escape standardization», rather than seeing these Old New Girls as characters, one can consider them as representations of principles, or even as objects or accessories necessary to comprehend a metaphorical ensemble. Painted objects? Women-accessories? Characters that turn into props, providing the background of another show: our own.
Lothar Hempel’s work stands at the crossroads between surrealism and primitivism, narratives and formalism, dream and folly, ethnology and psychoanalysis. Within this conceptual imbroglio, related to a geographical ambiguity that leaves us at a loss, it would be hard to understand where the Old New Girls have gone... on the rooftop of a parking garage, exposed to weather and watched by the birds, like an old publicity panel waiting to be replaced? As background-props of a music videoclip in which other women wriggle?The only certainty is that even though they are not static, they are made of ineluctable truths, souvenirs, projects, intimate experiences and hallucinations. Their ultimate cause is to reveal a natural affinity with our ideas that allows us to create our own story.