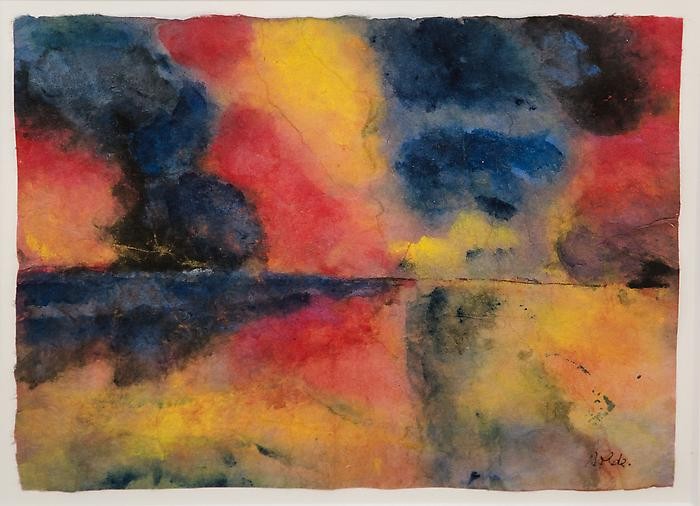 In collaboration with Beck & Eggeling, Düsseldorf

Van Doren Waxter, in collaboration with Beck & Eggeling, Düsseldorf, is pleased to present Emil Nolde: Expressions in Watercolor, a solo exhibition featuring watercolors by Emil Nolde (1867 – 1956), curated by Mr. Jeffrey Hoffeld. This exhibition will be featured as part of Master Drawings New York January 24 – February 1, and will be on view at the gallery through February 28, 2014. A catalogue has been published on the occasion of this exhibition with an introduction by Dr. Christian Ring, Director of the Ada and Emil Nolde Foundation, Seebüll and an essay by Mr. Jeffrey Hoffeld.

A well-known German Expressionist, Emil Nolde’s watercolors capture the transient moments of nature and human life with an unsurpassed vibrancy. Rich, luminous colors paired with the spontaneity of the medium create stunning impressions of the artist’s mind’s eye and experience. Often working with dampened paper and wet paint, this technique encouraged the interplay of color and organic form. Nolde’s works are frequently thought of as being in conversation with American Abstract Expressionism. Nolde describes his approach to making art as striving for “absolute originality, the intensive, often grotesque expression of force and life in the simplest form.” Powerful imagery matched with “violent color” create the foundation for his signature style.

In his catalogue essay, Mr. Jeffrey Hoffeld describes Nolde’s particular use of watercolor:

As early as 1908 Nolde had consolidated and perfected his powers as a watercolorist; his confidence with the medium enabled him to experiment freely with its capacity to express his inner self. He even embraced and cherished the accidental and haphazard in these works. Working outdoors, under extremely cold conditions, after failing, as [Peter] Selz described it, with a group of paintings, Nolde turned to watercolors, and used pieces of ice to paint with. Traces of ice crystals, formed by the frozen water, can still be seen in several works. We are fortunate to have Nolde’s own words on the subject: ‘At times I also painted in the freezing evening hours and was glad to see the frozen colors turn into crystal stars and rays on the paper. I loved this collaboration with nature, yes, the whole natural alliance of painter, reality, and picture.’

This selection of about 15 works on paper contains a range of subject matter such as landscapes, flowers, still lifes and figures. Several of the works on view will be from Nolde’s Unpainted Pictures series – made between 1938 and 1945 at his home in Seebüll, Germany right after the Nazis had confiscated his work from museums and forbade him from making art, declaring him a “degenerate artist.” While one must acknowledge Nolde’s nationalist beliefs and Nazi sentiments, Hilton Kramer in a 1963 Art in America review reminds readers that “it was characteristic of Nolde that he never altered his work to conform to the Nazi ideology he otherwise found so congenial to his dark spirit.” In years past, Nolde’s works were regularly shown in New York by Serge Sabarsky, one of the co-founders of the Neue Galerie, and Leonnard Hutton.

Emil Nolde, née Emil Hansen, was born in Nolde, Denmark in 1867 and died in Seebüll, Germany in 1956. He was originally trained as a woodcarver and illustrator, and became an artist in 1894 when he designed a successful postcard series. He was a member of the artist’s group “Brücke.” In 1963, the Museum of Modern Art, New York exhibited a retrospective of his work.
www.vandorenwaxter.com