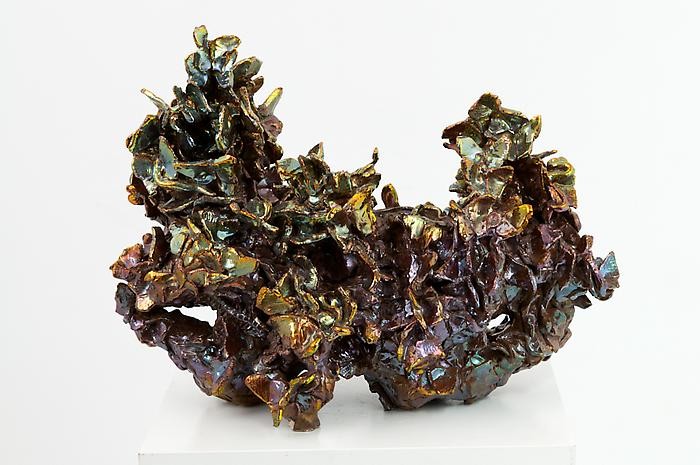 Greenberg Van Doren Gallery is pleased to present Julia Kunin: Nightwood, a solo exhibition featuring ceramic sculptures by Julia Kunin. The exhibition will be on view from February 23rd to April 21st, 2012.

Kunin’s sculptures combine elements of flora and fauna that showcase nature’s sublime beauty and dark, destructive power. Forms such as shells, flowers, octopi, snakes and butterflies create anthropomorphic amalgamations that exist as both freestanding and wall-mounted works. Referencing cabinets of curiosity, these works draw together wonders of the natural world, and re-present them as their own inquisitive constructions. Inspired by Bernard Palissy’s platters cast directly from plants and animals and Arcimboldo’s still life portraiture, Kunin continues to reinterpret this tradition of assemblage and nature morte. At once visually striking and grotesque, these works shape obscure miniature worlds, surreal portraits and artificial hybrids of nature.

The piece Janus of Flowers illustrates two merging heads under a covering of invasive and uncontrolled growth. Out of the point of juncture emerges a magnificent eruption of petal-like forms suggestive of an inverse mushroom cloud. A certain movement transpires from the bulbous and curvilinear forms evocative of both destruction and development, magnified by the use of glistening glazes.

Kunin underlines the inherent dynamism and ornate movement within the physical structures by using luster glazes to create a baroque spectacle. Color and light merge to produce varying psychedelic palettes. Referencing turn of the century Art Nouveau iridescent colors, the brilliant hues morph creating reflective pools of glaze and stunning highlights. The surfaces and forms of Kunin’s sculptures engage in a dialogue considering artifice and decadence in conjunction with the natural world, especially with regards to mortality, decay and nature’s malevolence.

Julia Kunin lives and works in Brooklyn, NY. She received her B.A. from Wellesley College and an M.F.A. from Rutgers University. In 2002, a solo exhibition of her work was mounted at the Deutches Leder Museum in Offenbach, Germany. Kunin was the recipient of the 2010 Trust for Mutual Understanding Grant, the 2008 Pollock-Krasner Foundation Grant, and The John Michael Kohler Arts/Industry Artist Residency in 2007.
www.vandorenwaxter.com