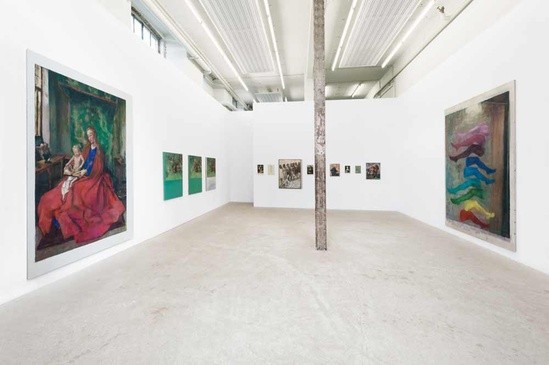 From the delta to source and back again – Jochen Plogsties swims up the stream of art history, putting in the process the skepticism of Western cultural circles as regards adaptations, copies and repetitions up for debate. Bosch? Da Vinci? An LP cover? The viewer of Plogsties’s work is often overcome by the sense that he is already familiar with the motifs he is looking at, could call them up from his own visual memory. But memory is deceived: Size and detail are radically varied at times, categorically addressing the theme of the sources from which Plogsties draws his models. The detail of a reproduction of a picture by Hieronymus Bosch is for example the same one used in a catalogue. In other cases he produces an enormous enlargement of a photograph by Edgar Leciejewski and also includes the white space surrounding a reproduction of Bronzino’s Maria de Medici in his painting. In the process, however, the application of paint, the materials and the sizes are similarly decidedly contemporary and Plogsties’s own painting style unmistakable and fascinating.

A sheer incalculable number of pictures known by the history of art exist. And we are also surrounded by an omnipresent media that moreover produces and reproduces ever new pictorial formats to the extent that the hunger for innovations and illustrations generate a flood of ever more shrill, loud and absurd pictures. This overflowing reservoir, from which more and more images are still flowing, is the source from which Plogsties, based on subjective criteria, makes a selection that he recreates on his canvas. Plogsties calls this a process of re-condensation. With this term he describes what happens between seeing and painting, between reception and adaption: Just as a liquid evaporates and the aggregate state changes, transforming itself under changing climatic conditions back into a liquid, materially condensed state, everything dissolves over the course of the painterly transformation and appropriation of the source material into its individual components: Meaning, context, reference evaporate; motif, gesture, material and composition separate from each other.

And then he starts to paint – with the picture surface in sight, the tools of a millennia-old history of painting in his bag, the conditions of a contemporary flood of images weighing on his shoulders, Plogsties generates new pictures, focuses our perception on the supposedly familiar, only to then irritate it again. As impartially and alertly Plogsties as approaches his subject matter, the viewer must also become just as free, enter into the new painting, pursue thoughts and memories and not be ensnared but to swim freely and trust one’s eyes. “In” shows new pictures that mirror both collective and subjective pictorial memory at the same time. Sources become oceans.