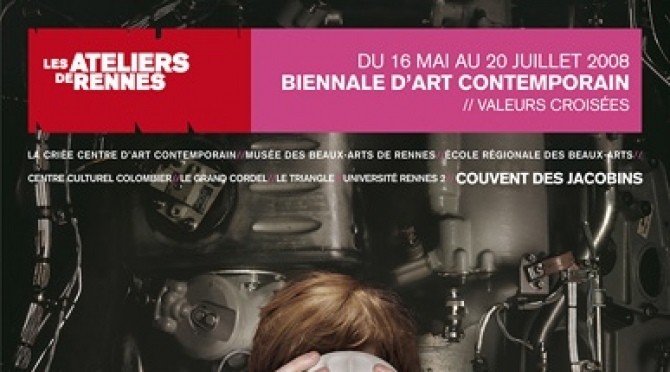 Raphaële Jeune developed the concept and implemented it via the Art To Be association that she directs. Valeurs Croisées explores the relationship between art and business. The encounter between the two actors investigates an issue common to both areas of production — creating value.
All production areas generate value. But is the process the same for industry, whether material or immaterial goods are being produced, as it is for art? What are the differences and similarities? What happens when producers from both areas debate the principle, and take into account the logic of economics that prevails in society today?

By drawing together actors involved in different practises – artists, company employees and entrepreneurs, and also philosophers, sociologists, economists, art critics and of course members of the – around this common issue, Valeurs Croisées is determined to ignore the habitual barriers that separate and divide, and devise new ways to interact. Unlike the usual political debates on the "value of work", this event stresses the fact that it is possible for two different worlds to meet for their mutual benefit, and together re-inject new meaning into economic relationships in the capitalist system.
While the motor aspects of such an encounter are explored, its difficulties and limits are not evaded: the projects of those involved do diverge. This project does not intend to produce a consensus of opinion, but is an attempt to assess what an artist can achieve within a company, and conversely, what a company can achieve in its relationship with an artist.

Artists' residencies within a company: the SouRCEs

Valeurs Croisées is setting up, as an experimental creation platform, encounters between artists and company employees. Fifteen artists take up residency in companies under the label of SouRCEs (Stays for Research, Creation in an Enterprise) and create original works of art, based on one aspect of the company's life.  A wide-ranging exhibition occupying several venues in Rennes The second aspect of the event is the major exhibition on show at the Couvent des Jacobins and in seven other venues in the city. It presents works realized for the SouRCEs residencies as well as many other pieces, either specially created for this event or borrowed from public and private collections. Together, they provide a panorama of art today while further exploring the major issue: crossing values. What happens when artists call into question the value-creating mechanism that is basic to both their work and that of the company employees? And what happens when company employees question the value that work gives to their environment (to business, to society) and to themselves, and when they take a look at creative practises in order to discover something new?

The "Think Tank" is made up of people from different backgrounds, who follow up the events with three seminars - at which a conceptual machine, the Générateur de Problèmes [[[[[, is activated by its designer, the artist-consultant François Deck, in order to think through the "problem-resource" concept that stems from value creation through work. The Générateur de Problèmes [[[[[ is also brought into action in other contexts such as primary schools, the municipal election campaign, public spaces and so on.

A programme of meetings, debates and lectures also goes alongside the exhibitions, following on the value crossing debate that began during our preparatory phase and the SouRCEs residencies. Workshops are available with artists who engage the public on the issue of work both productive and unproductive.  Lastly, artists' films are shown at Le Tambour, Université Rennes 2 - Haute Bretagne.
www.lesateliersderennes.fr