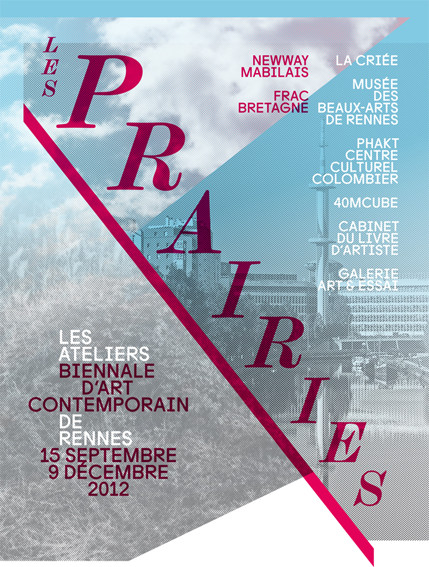 The Spirit of New Beginnings

The artistic programme was proposed in response to a call which sought to explore the relationship between art and business and art and the economy. The point of departure of my thinking for this edition of the Biennale is the "enterprise","entreprise" as the French word for business or company,which I chose to interpretliterally, in the first instance. An enterprise is 'something undertaken' and it carries the idea of a beginning (Jean‐Jacques Rousseau begins his book The Confessions with the words "Je forme une entreprise [...]”‐ 'I am embarking on an enterprise'). This mode of action led me to an empirical method, which shaped the way that I would work with the artists as well as my approach to the context of the Biennale. It provided me with a concrete framework for the artistic programme in that I was able to place it in a tangible setting: indeed I considered Rennes and, in particular, the modern city as constructed since the 1960s.
I designed the programme around artists whose work I was familiar with, before broadening the selection and researching other artists. The theme of conquest, which is implicit in the thematic of 'prairies', draws on various sources and could be explained in various ways: appropriating space for a purpose; inventing artistic ways of working with and in a space – including that of the exhibition itself; exploring notions of ex‐ panded fields and attitude, given that it is attitude that defines a space. What enter‐ prises can be embarked upon in the hyper‐developed world, perceived and represented these days as saturated?

A FIGURE OF CONQUEST

The figure of the frontiersman, or pioneer, is connected to the theme of conquest and the prairie. The pioneer is an ambivalent character – a figure of conquest in history and in legend, whose contradictory aspects need to be prised apart. In modern usage the term has positive connotations. The pioneer is a precursor who clears a path for others to follow, goes beyond the limits of knowledge and opens up new vistas in a field. The historical image, on the other hand, is somewhat negative: the pioneer is a conqueror or a colonizer and embodies the imperialistic tendencies of Western civilization. The spirit of conquest is everywhere in the history of our pluralistic, scientific, techno‐ logical, political, and of course artistic modernity. The pioneer is a visionary, a revolutionary, an inventor, and a builder who imagines and prepares a new world.
Operating in the vanguard of society, the pioneer embodies a kind of modern hero who now belongs to the past. Like the word 'vanguard', 'pioneer' has military origins. In the army, they were the front‐line infantry or the sappers that cleared the way. In both cases they were foot soldiers, at the bottom of the military hierarchy.
Three characteristics are encapsulated in the etymology of the word: position (spatial, social, and intellectual), mobility, and a physical relationship with the environment. Al‐ though a pioneer is, etymologically, a drudge, living a rudimentary, harsh life, the ety‐ mology also includes an idea of movement. Its root is in pedonis, a derivation it shares with “pedestrian”. This 'person in a state of movement' is, in other words, displaced. Displaced to another country, another society, new world where they have no place. Thus, this figure constructed and defined in relation to spaces and territories is to be understood in terms of an attitude towards space. Attitudes and way of life shape an environment, either in an authoritarian mode or through a more intimate cooperative interaction. Conquest is embodied by a variety of spatial positions that confront one another: from the American pioneer to the post‐colonial migrant. Botany also provides a useful model for examining the relationship between the “individual” and the envi‐ ronment: there are pioneering plants that prepare the earth for vegetables that will fol‐ low later, while others colonize ecosystems and destroy their diversity.

The Prairie: a grassy expanse, where space and an open horizon spread out in all direc‐ tions. It is a common, shared, scenic, and poetic space and even a cinematic cliché in Europe, and America. Natural or artificial prairies are home to a range of species, and vary with the climate, latitude, or continent, having specific flora and fauna according to where they are (the African savannah, the Russian steppes, or the Argentinean pampas, for example). Prairies also belong to the built world.
Thus, the American prairie represents the experience of an uncontained expanse – un‐ limited space and boundless horizons. And it is precisely this flat and monotonous ge‐ ography that Gertrude Stein transformed into a modern poetic experience. She laid it bare and detached it from its origins. Flatness also characterizes the generic European green prairie ‐ geographical and poetic flatness. Monotony produces repetition. Repeti‐ tion is an act that is made real when carried out. It produces a poetics that begins with action rather than with an ideal.
When we explore the horizontal, we discover the verticality of grass: “A flat expanse seen horizontally from above; yet it is formed by a multitude of upright stems whose verticality gives it its green quality” (Francis Ponge)1. This takes us from the flat ex‐ panse to the three dimensional expanse: a body occupies an area in space according to the primary definition of the term. An expanse is not just surface area. A literal inter‐ pretation turns space in on itself, and flatness leads to a simple vitality: “the awareness that grass is vertical, the constant uprising of green that breathes life back into us”. Horizontality also gives rise to an egalitarian principle in relationships. They develop on the same plane, which they do not in a vertical, hierarchical organization. Flatness is in fact an attitude: a way of approaching the expanse as a grouping of things, things on an equal footing, things like death. But it is a beginning that is beginning here. Les Prairies literally expresses the flattening of spatial practices. A number of artworks work with the expanse and recognize the importance of concrete spaces, of sites in all their complexity and their history. "Occupying the ground” seems to be a concern for artists who have brought their background of using sites to bear on their work (Katinka Bock, Fernanda Gomes, and Guillaume Leblon are examples). Others decompose our décor (Gyan Panchal), flatten depths (Dove Allouche, Irene Kopelman, Batia Suter), or develop botanics of the soil (Loïs Weinberger).
Today’s artists adopt an objectivist or literalist attitude, taking a close look at reality and objects, bringing the same attitude to both – something they are often criticized for. Of course, you should have in mind that Manet was a master of flatness. Thus, “art‐ ists reveal modern composition” (Gertrude Stein)2: their point of departure is a con‐ structed world. Their work reflects the composition of the modern world: reality is composition.
To the American pioneer, the expanse represented opportunity in the form of a prom‐ ised, virgin land. But Indians lived on the prairie. Two spatial concepts collided: occupa‐ tion and habitation. To occupy is to take possession, to make maps and to create order; to inhabit is to “see a latticework of lines rather than a continuous surface” (Tim In‐ gold)3, an environment woven from lifelines ‐ the straight line and the grid, or the curve These paths have been traced by men and animals as they followed the lay of the land. The Indian was there before the pioneer and showed him the paths, which he had been shown by buffalos and other animals.
Les Prairies offers a paradoxical journey through flatness and concepts of flatness, or platitude and platitudes to be closer to the French wording – the word "plat" in French means flat. This would begin with a simple, elementary experience which would consist in adopting an attitude of platitude regarding the world; flattening or leveling things, considering them as equal, repeating them, remaking them, in the same way as the art‐ ists, poets and writers who seek to understand the composition of the contemporary world. The adventure would be to move towards things, to shift our viewpoint towards them. In other words to deconstruct the “grammar of a place”, dissociate things from their class or origin, experience them beyond their limits. In concrete terms this would imply embracing reality in full. This proposal to praise platitude or flatness comes as a possible antidote to the tyranny of context – context today is a world of connected net‐ works that are disconnected from anything concrete.