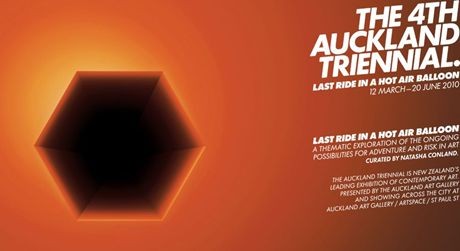 The 4th Auckland Triennial, Last Ride in a Hot Air Balloon investigates adventure and risk as productive tools within the field of art. The title sets up a provocation for the adventurous condition: that it is itself in an era of conclusion or culmination.
Querying the inheritance of modernity’s taste for expansion across all modes of political, economic and cultural exploration, and set within the current global economic contraction, the exhibition leaves us with adventure and risk suspended as possibilities. The subject of adventure during vulnerable economic times has a context specific relationship to the city of Auckland, New Zealand’s business hub, having shouldered the brunt of the country’s pioneering economic reforms of the 1980s and the 1987 stock market crash.
While looking at historic modes of risk and adventure and their impulses, the exhibition focuses on art works that concentrate our attention on alternative and less impacting modes of exploration. Accordingly, themes of alternative economies; misplaced geographic exploration; formal exploration within delimited means; and risk as a stimulus for engagement all emerge within the selection. The result promises to provide an exhibition space which itself allows room to contemplate the potential freedom for adventures within the space of the viewing experience.
Over the opening weekend Last Ride will feature a full programme of artist talks, performances and speakers panels, generating a lively space in the urban Auckland environment. Forums will expand on ideas central to the theme of Last Ride in a Hot Air Balloon including: the Experience and History of Adventure, Alternative Solutions for Living, Adventurous Materiality, Physical Freedoms and Political Spaces without Polarity.
The May Symposium (21-23 May) will feature an International Speakers forum and is timed to follow the opening week of the Biennale of Sydney.
The research for the 4th Auckland Triennial has focused on a horizontal axis across the globe from Asia to the Middle East, distorting the typical travel route from Southern to Northern hemispheres, revealed in the mix of artists.
www.aucklandtriennial.com