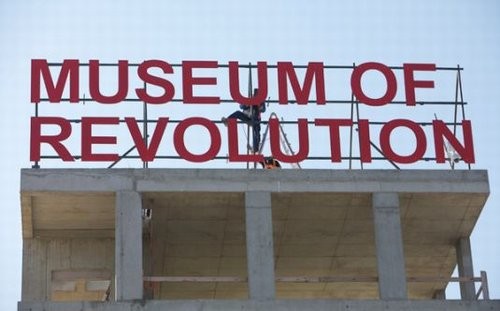 When the new 20er Haus Museum opens in late 2011, it will substantially enrich Vienna’s landscape of museums. The pavilion, designed by Karl Schwanzer for the 1958 Brussels World Fair, is an outstanding example of Austrian post-war Modernism and after the completion of its adaptation into a museum for Austrian art after 1945 will be used by the Belvedere to engage in a dialogue with international positions. By looking into international tendencies of contemporary art, a discourse is meant to be evolved and cultivated that closely relates to the Austrian art scene and also reflects twentieth-century Austrian art history.

The artist Marko Lulic, born in 1972, addresses such themes as architecture, monuments, public space, and the legacy of Modernism in Eastern and Western Europe on various levels, relying on references, (false) translations, and transfers. On the basis of formal aspects and cultural, social, and political issues, objects and places are furnished with entirely new meanings through subtle shifts in materiality or conceptuality.

Lulic’s starting point for his concept of the work Museum of Revolution was the Muzej Revolucije (Museum of Revolution) in Belgrade, designed in 1961 by the Croatian architect Vjenceslav Richter. (Richter conceived, among other buildings, the Yugoslavian pavilion for the 1958 Brussels World Fair). Richter’s Museum of Revolution has never been completed, but only progressed as far as the ceiling of the structure’s basement. A ruin now overgrown with shrubbery, it still exists, entirely forgotten, in a park landscape of New Belgrade. For Lulic, this museum is a model case of how dreams or revolutions can peter out and how manifestos of a new dawn can turn into symbols of decline.

Lulic’s work Museum of Revolution, installed on the construction site as the first temporary intervention in the new 20er Haus, questions the current meanings of the concepts of ‘museum’ and ‘revolution’. In launching a discourse on the significance of museums in the twenty-first century, he encourages spectators "to find out about their future expectations of and dreams about this institution”, thereby addressing the museum as a container or dynamic laboratory and its role within and for society. In his reduced text and typographic works, Lulic, in recent years, has primarily been preoccupied with utopias. For him, ‘revolution’ represents an “emotionally charged, utopian concept”, which can and should be interpreted by the spectator in individual ways. The ‘misplacement’ of the slogan, inspired from the idea and aestheticism of the American billboard, “raises questions that cannot be answered, but are returned to the audience”, Lulic says.
www.belvedere.at/en/schloss-und-museum/augarten-contemporary