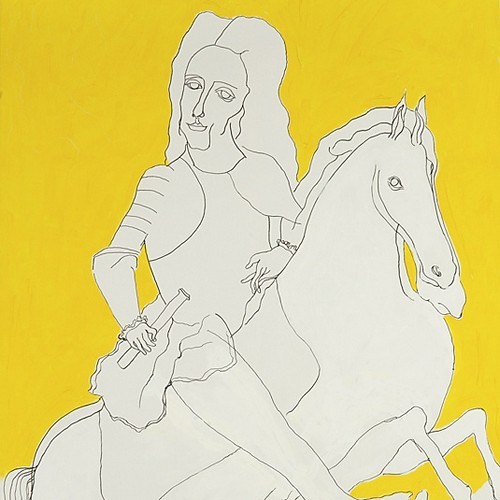 Oswald Oberhuber dedicates his exhibition at the Belevedere’s Orangery to Prince Eugene. In his artistic tribute, the artist deals with the exceptional personality of the military commander, art connoisseur, patron and sponsor of the arts and architecture. In paintings, objects and sculptures, Oberhuber comments on the life and work of Eugenio of Savoy.
Oswald Oberhuber can be described as one of the most prominent representatives of Austrian contemporary art. The broad spectrum of his work reflects a discursive and challenging understanding of art, which merges text and image, allowing one to permeate the other. “I copy everything”, the artist states, referring to both art historic image production and contemporary art.
The artist’s images are marked by a dynamic, continuous stroke. Prince Eugene on horseback, the Battle of Zenta 1697, the Belvedere palace or the lion as the animal devoted to the prince - Oberhuber draws from the pool of these and many other themes for his images, framing the contours with bright, colorful surfaces. In an abundant conglomerate of images and sculptures, he creates a seemingly trivialised structure of Prince Eugene’s role as a patron of architecture, his passion as a collector and his humanist education. Like a card game, the artist sorts them according to categories such as buildings, animals, plants, portraits and war depictions. Oswald Oberhuber does not focus on the singular works, but rather on the context of the exhibition as a whole, in which the images, objects and sculptures can fully unfold.
www.belvedere.at/en/schloss-und-museum/augarten-contemporary