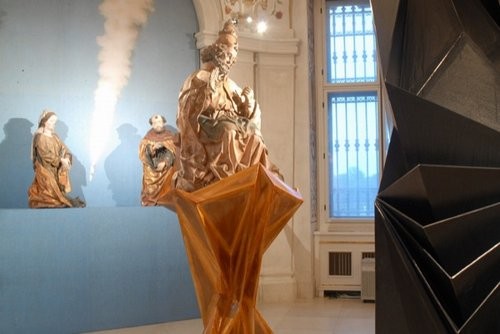 In his works, the artist Tillman Kaiser, born in 1972, relies on the medium of collage, altering meanings and their contexts through the rearrangement of form, material, and content. Kaiser reinterprets the formal languages of Cubism and Futurism, creating poetic works that make a fresh and autonomous impression, in spite of citations and references.
For his intervention at the Belvedere, Kaiser has dealt with three medieval sculptures preserved in the museum’s collection. The artist contrasts Hans Klocker’s figures of the Virgin Mary and St Joseph from a Nativity scene with latest technology, having replaced the missing Christ Child with a dropping missile, the symbol of destructive power, which is installed behind the holy couple in the form of a piece of wallpaper. Next to this group and facing away from it appears the figure of St Peter Enthroned as Pope, a masterfully carved work from the Viennese workshop of Jakob Kaschauer. Kaiser repeats the elaborate drapery of the papal garment in the cardboard construction of his newly designed pedestal, which is considerable taller, thus amalgamating the vocabularies of form of the fifteenth and twenty-first centuries. St Peter is juxtaposed to a dark geometric sculpture entitled Shadow. Kaiser’s black lacquered objects have a Futurist touch about them, but simultaneously they seem to be borrowings from the 1920s or the 1970s. After all, the figures are reminiscent of the terrifying characters appearing in the utopian films from those decades.
The motif of the flying missile derives from an old Chinese postcard, an objet trouvé the artist detected on one of his travels and added to his archives. However, Kaiser has turned the picture upside down, so that the rocket does not rise, but drops. It this about the glorification of technology and progress according to some modern religion or the archaic image of a merciless, brutal God? Kaiser leaves it to the spectators to decide for themselves.
www.belvedere.at/en/schloss-und-museum/augarten-contemporary