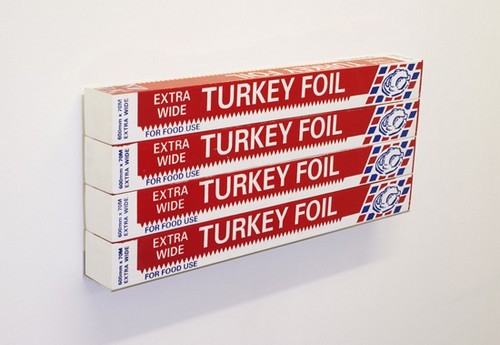 The Greek prefix “pseudo” denotes being apparently rather than actually as stated. In fact, it refers to fraud, mimicry and the delivery of a gesture that fails to transport the actual contents. Is the art of British artist Gavin Turkʼs pseudo art? Yes and no.
His work cites the great gestures of the “stars” of art history, appropriates iconic works, repeating and thereby heightening their effects. Turk turns off the existing criteria used to classify an artwork— invention and originality, authorship and authenticity. Serving up his own blend of art from the scenes of art history, he is continually reinventing himself as an artist. The outer manifestations of wellknown works of art are taken up and their meanings altered. Appearance and reality are called into question.
This is true for the fetishizing of art and consumer articles in Pop Art as well as the Dadaistic demystification of the masterpiece. In his artwork “Turkey Foil” Gavin Turk has used silkscreen on wood to construct his own brand cult and has robbed Duchampʼs ready-mades of their foundation.
What appears to be prefabricated, found objects taken from everyday life—a discarded apple core, an old sleeping bag, and a burnt-out campfire—turn out to be intricately produced and painted bronze sculptures. Thus he shows how incessant reproduction has bled the original anarchistic content from Dadaism, which now functions as an accepted code.
What sounded like a nightmare scenario in Jean Baudrillardʼs (anti-)media theory in the 1970s is celebrated by Gavin Turk today: mass mediaʼs creation of a hyper-reality that only works in simulation and simulacrum. Turk demystifies this scenario by positioning the observer in its midst.
Mystification, fetishization, star cult, recycling, and duplication confront the observer of Gavin Turk’s works in a dense and deliberate way, thereby referring to their own lack of substance. His incest of ideas is carried out so blatantly and ironically that all those visitors to contemporary art spaces whose bored glances pan the room with an expression of “seen that before” will take a second look. Gavin Turk participated in the infamous exhibition Sensation: Young British Artists from the Saatchi Collection as well as its successive shows. Internationally known collections with his works include The Tate Collection, London; Arts Council, London; The British Museum, London; The Denver Art Museum; American Federation of the Arts, New York, and the San Francisco Museum of Modern Art.
www.asshowtime.com