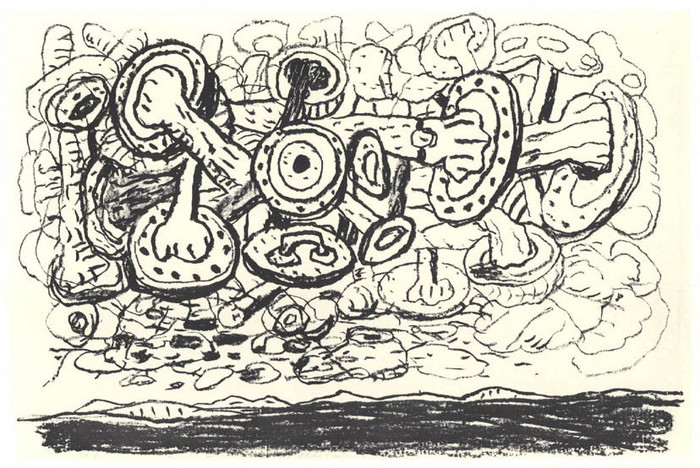 Aurel Scheibler is proud to announce the first solo exhibition of paintings by the American artist Philip Guston (1913-1980) in a gallery in Germany. This is in line with the gallery ́s commitment to showing major artists of the 20th century such as Öyvind Fahlström, Lucian Freud, Ernst Wilhelm Nay, Bridget Riley and Ad Reinhardt. The gallery offers an intimate setting in which to view a selection of Guston ́s paintings from his late period that feature such characteristic imagery as Ku Klux Klan figures and surreal arrangements of everyday objects.

The work of Philip Guston traversed art movements as diverse as Social Realism and Abstract Expressionism. After a decade of alternating between abstraction and figuration in his work, he premiered his own unsetting version of realism in 1970 to a highly critical audience. Despite its initial reception, however, his unique figurative style has had lasting influence on subsequent generations of American and European artists, heralding both postmodernism and the return to the figurative in painting. Guston ́s bold renewal of the figurative reflected his belief that "painting is "impure" which contradicted the strong affirmation of purified paintings made by Ad Reinhardt in his 1957 manifesto "Twelve Rules for a New Academy." As the gallery opened its Berlin rooms last summer with an exhibition of Reinhardt ́s work, it is only fitting that Guston ́s work should be the subject of the current exhibition, evoking a return to earlier and still current debates.

Astonishingly, given the significance and enduring impact of his work, the first comprehensive exhibition of paintings by Philip Guston in Germany took place as late as 1999/2000 at the Kunstmuseum Bonn and at the Württembergischer Kunstverein in Stuttgart. "MoMA in Berlin" at the Neue Nationalgalerie in 2004 devoted an entire room to the artist, undoubtedly one of the exhibition ́s highlights. Concurrent with our show, the Kunstmuseum Bonn is exhibiting nearly one hundred of Philip Guston ́s works on paper until the end of May.