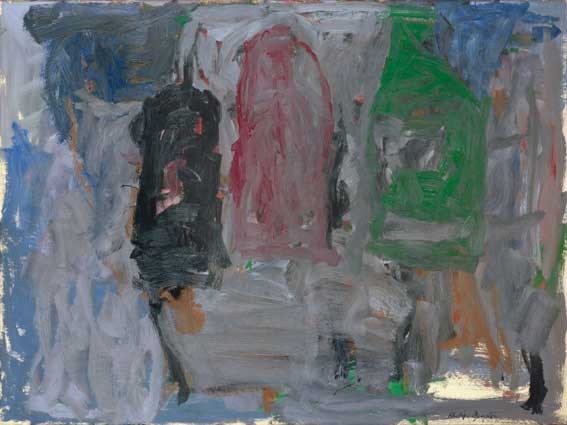 Berlin – On Friday 2nd May, Aurel Scheibler opens his second exhibition devoted to Philip Guston (1913 – 1980) which comprises of a group of late drawings and works on canvas complemented by two important earlier paintings. Scheibler’s first Guston show, organized in 2007 and sourced solely from private collections, was the first Guston exhibition ever to take place in a German gallery. “Philip Guston” coincides with “Philip Guston – Late Works” which takes place at the Sammlung Falckenberg in Hamburg until 25th May and will travel on to the Louisiana Museum of Modern Art in Humlebæk where it will be on view during the summer.

Guston was a major catalyst and his ability to move successfully between figuration and abstraction and back again is particularly relevant today as artists shift regularly between these once mutually exclusive poles. Guston’s work also affirms the vitality of painting and its past history in an age glutted with mass media images. The first appearance of his late work in Europe in the influential “A New Spirit in Painting” exhibition at the Royal Academy in London in 1981 set the tone for a renaissance of the appreciation of painting. Guston’s retrospective, which followed in 1982 at the Whitechapel Gallery in London, the Stedelijk Museum in Amsterdam and the Kunsthalle Basel manifested the important role of the artist for his own generation and many more to come. Today, nobody seriously involved with painting – be it figurative, abstract or both – will be able to circumvent Guston’s oeuvre.

Not only is the presentation in our gallery a complementary chapter to the current museum shows, it also offers the rare opportunity for an intimate engagement with a crucial grouping of Guston’s work. The quintessence of the show is formed by a selection of three drawings and seven paintings from what is usually known as his ‘late’ period. The intriguing feature of this exhibition is the fact that it is corner-stoned by two superb, colorful abstract paintings from 1960 and 1961. These works act as beacons, they clearly open up a way to the obsessive, image-ridden works that Guston will paint from the late sixties onwards as, almost imperceptibly, objective elements gather in lyrical abstraction. They are pivotal works for the understanding of Guston’s unique achievements in the story of abstract art.

The three charcoal drawings in the show from 1968 and 1969 are important examples of Guston’s new, simplistic language, which he developed since 1966. At this point, he had explored abstraction to its limits. He ceased painting altogether, brooding, looking for a fresh start. The way to the tangibility of the late work was pointed out to him through drawing. The most basic of forms, an arc, a banal shape, slowly move into a vocabulary made of unassuming ‘things’ and objects of everyday life. In 1968 his drawings led to the illustrious hooded „Klan“ figures, images that Guston had literally lived with since his teenage years and that had appeared in his early figurative work. The exhibition contains three exemplary paintings from this period in which Guston’s renewed confidence and sense of purpose are apparent. In the mid seventies – four large canvasses of this time are shown – the work takes a new turn. These paintings are naked truths. They mercilessly dissect Guston’s troubles and doubts, his inner conflicts a cutting edge, they have the power to let in the light. Guston’s lifelong passion for poetry, his endless joy connected to the everyday ‘things’ whose useful lives take place uncomplainingly alongside his own and his reverence for his wife Musa find their way into this work. The good parts of life exist where its deepest angst and darkest despair loom and Guston had acknowledged and grasped this. He made it visible, tirelessly, in his paintings and drawings. “In my beginning is my end.” wrote T.S. Eliot in ‘East Coker’. Guston had arrived on the same page.

A catalogue containing illustrations of all exhibited works as well as personal photos from the Guston Estate archives will be published on the occasion of our exhibition. The publication will feature texts by William Corbett, David Schutter and Aurel Scheibler. William Corbett is an American poet who has published several poetry collections as well as art criticism. He met Guston in 1972 and struck up a friendship with the artist. In 1994 Corbett wrote “Philip Guston’s Late Work: A Memoir”. David Schutter is a Chicago-based artist and Associate Professor at the Department of Visual Arts at the University of Chicago. David’s work has been widely exhibited, most recently in the exhibition “The Way of the Shovel: Art as Archeology” at the Museum of Contemporary Art in Chicago. Schutter has been represented by Aurel Scheibler since 2006. ISBN 978-3-00-045703-6

Even today, Guston’s oeuvre is still relatively unknown to the general public in German-speaking countries. The work is hardly noticeable in museums and the first German institutional exhibition dedicated to Guston was shown in the Kunstmuseum Bonn and the Württembergischer Kunstverein Stuttgart in 1999/2000. This was followed by an excellent retrospective of his works on paper, which ran in Munich, Bonn and Humlebæk in 2007/2008. At present, in a joint effort, the Schirn Kunsthalle in Frankfurt, the Sammlung Falckenberg in Hamburg and the Louisiana Museum in Denmark are devoting an exhibition to his late work which opened in November last year and will run through the summer of 2014.

Aurel Scheibler thanks the Estate of Philip Guston and the McKee Gallery, New York, for their kind cooperation.
www.aurelscheibler.com