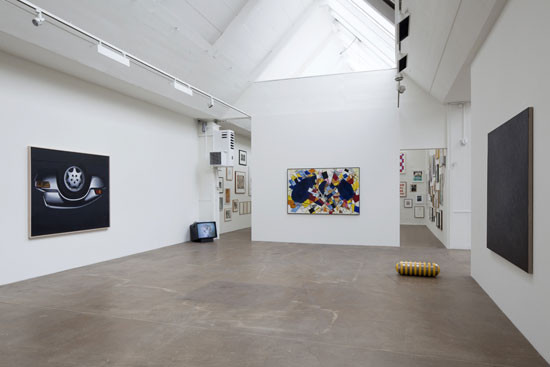 
On the 20th anniversary of Aurel Scheibler, the gallery presents TWENTY, an exhibition of works by artists it has shown since 1991 in Cologne and from 2006 onwards in Berlin.
The heterogeneity of Aurel Scheibler’s artist roster is easily explained by his taste for underestimated upcoming artists and overlooked qualities in the oeuvre of the more established. In its first year, the gallery already defined its program with solo exhibitions of Chargesheimer, Öyvind Fahlström, Joe Zucker and Jack Pierson. Scheibler further broadened it by showing Weegee, Mark Morrisroe, Bridget Riley, Dan Asher and the recently deceased Lucian Freud. Alongside establishing Pierson and Anthony Goicolea as household names in the art world, he is one of the first German gallerists to champion the art of Damien Hirst, Rachel Whiteread and Gavin Turk. More recently, Scheibler took on board two young British artists, Neil Gall and Tom Chamberlain, and premiered in Germany one of the pioneers of video art, Michel Auder.
In 2006 the gallery opened in Berlin-Charlottenburg with an exhibition of works by Ad Reinhardt and a year later added a second space near Checkpoint Charlie, which today functions as the sole gallery. While Scheibler continues to surprise the Berlin art audience with solo shows of such historical figures as Jackson Pollock or Philip Guston, he never fails to search for new artistic positions with a long-term vision and has recently shown Thomas Rentmeister, Malcolm McLaren, Wolfgang Betke and Michael Wutz. Another important aspect of his work as a gallerist is the representation of the estates of Ernst Wilhelm Nay, Fahlström and Alice Neel.
Aurel Scheibler was born in 1960 in Cologne, where he began working in the art world while still at school and, upon graduating, at the auction house Kornfeld in Bern. Later he gathered invaluable experience in the print department at the New York branch of Christie’s and as an assistant in the department of sculpture and painting at the MoMA. In the 1980s he worked for Ernst Beyeler in Basel and from 1984 to 1987 for Michael Werner in Cologne. In 1990 Aurel Scheibler edited the catalogue raisonné of Ernst Wilhelm Nay’s oil paintings for the Museum Ludwig in Cologne.
www.asshowtime.com