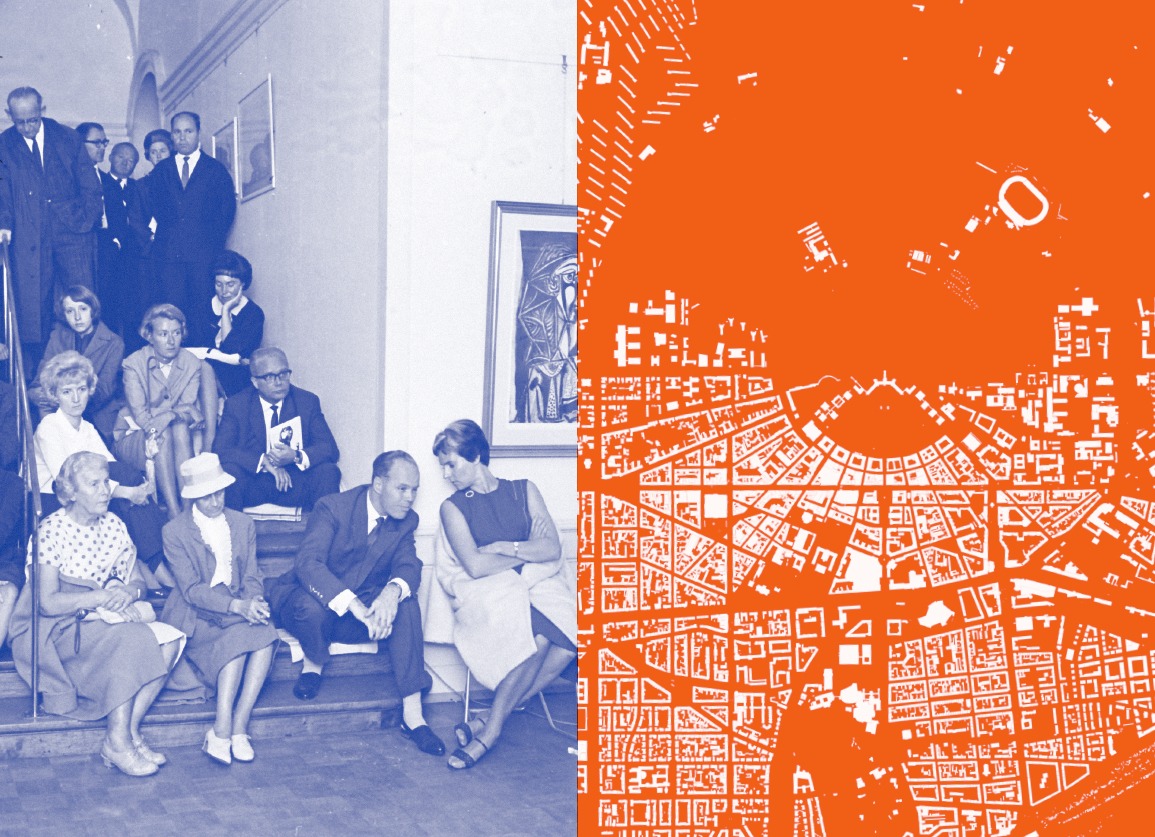 Photo: Horst Schlesinger; Stadtarchiv
Karlsruhe, 8/BA Schlesiger, Negativ:
A11 138/5/22. Graphic Design: Hammer,
Zürich und Erik Schöfer, Karlsruhe
During this jubilee year, Badischer Kunstverein dedicates the exhibition 49° - Cultural Production in Karlsruhe to the town of Karlsruhe and it's rich artistic and creative scene. With reference to cultural locales and production sites within the town, to active niches or those that have already closed, we explore the current and future conditions of artistic and cultural production in Karlsruhe. For the duration of the projects, invited local protagonists will present themselves at the Kunstverein, or will instead receive visitors at their own working spaces. The aim of the project is to highlight the city's cultural diversity while strengthening dialogue and exchange between individual actors in ways that span generations and groupings. A special exhibition design, which concretizes the interface between information, communication, and the radius of action has been developed for the Kunstverein. This design is situated in between platform, archive/research, and cultural city map.

On the one hand, it has long been recognized that a city's cultural scene accounts for much of its attractiveness for residents; on the other hand, a “creative economy” tends to reduce real artistic freedom while gentrification converts formerly available space into exclusive neighborhoods. We attempt to thematize this conflict rather than aiding and abetting the logic of exploitation. At the same time, the exhibition is designed to emphasize a new attentiveness to the connection between art and industry, a link that played an important role in the early history of the Kunstverein. Originally planned as an association for art and industry, the Kunstverein organized exhibitions exclusively on this topic (Kunst & Gewerbe) from 1821 until 1829. One of our historic exhibition spaces (today the Waldstraßensaal) was even known later on as the Kunstgewerbesaal (Hall of Arts and Crafts).

Our central historical figure and conceptual reference for this project is the fashion designer Emmy Schoch, who revolutionized female fashion with her creations in the early 20th century. Her personality represents a link between the history of the city and that of the Kunstverein. At the same time, her single-mindedness in marketing women's fashions that were unconventional at the time, and which dispensed with typical restrictions internationally, beautifully illustrates the avant-garde and revolutionary potential with which the jubilee program as a whole – and the exhibition in particular – seeks to identify. Emmy Schoch operated her fashion studio and showroom at Herrenstraße 12, and beginning in 1938 at Waldstraße 3, the location of Badischer Kunstverein.

The exhibition at the Kunstverein is conceived as an information and communication platform which casts its threads out in order to connect the various studios, workshops, and businesses throughout the city. The project deliberately moves in two different directions and includes activities situated both within and outside of our building. Many events are devoted to locations within urban space, which are visited on organized walks and explored further. Research results will be presented in an installation, which can be supplemented by visitors through their own materials for the duration of the exhibition. We are taking this jubilee celebration as an opportunity to create a registry of our members, many of them artists or cultural producers, who are invited to submit their portfolios.

At the same time, we want to open the doors of the Kunstverein for personal and collective encounters. This summer, Ask Me Anything becomes the guiding principle of our Save Your Wednesdays series. Everyone is invited to weekly meetings featuring exchange and dialogue between the curious, experts, and cultural protagonists. The format provides a space for spontaneity and a comfortable atmosphere for getting to know people, as well as for interviews and workshops devoted to concrete questions such as current options regarding the availability of urban studio space, artist's subsidies and artist's residencies, and the state of art in public space. The aim is to make connections between various fields of expertise and to take advantage of existing diversity.

For this project as well, the Kunstverein has invited a local partner to open another 'window' into the town. For the duration of the exhibition, every day the Badischen Neuesten Nachrichten will be presenting a portrait of an artist based in Karlsruhe. On the same day, each featured artist will issue an invitation to visit his or her studio.

49° – Cultural Production in Karlsruhe investigates a field that is located between familiarization and contemplation, discovery and exchange, history, present, future, in an effort to pique curiosity concerning cultural personalities and places in Karlsruhe.