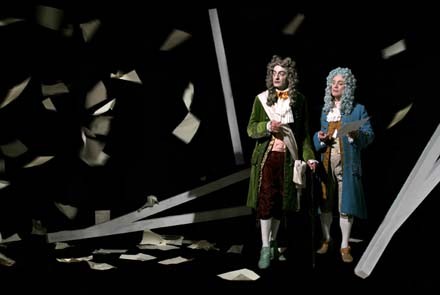 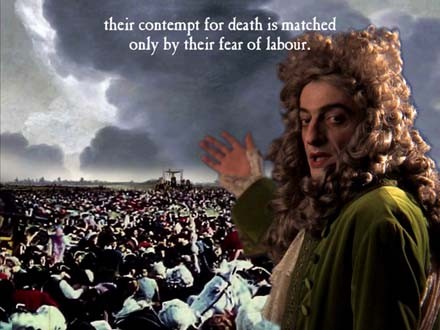 Anja Kirschner & David Panos
The Last Days of Jack Sheppard, 2009
film still
We cordially invite you to the film installation The Last Days of Jack Sheppard by Anja Kirschner and David Panos at the Badischer Kunstverein, Karlsruhe. In the center of the exhibition, presented for the first time in Germany, is the screening of the eponymous film, complemented by sculptural elements from the original film set, as well as by archive material in the form of prints, drawings, posters and books relating to Jack Sheppard.

The Last Days of Jack Sheppard is based on the life story of the carpenter Jack Sheppard, who turned his hand to thievery in 18th century London and became a legend for his spectacular jail-breaks. In their re-enactment of the historical material, Kirschner and Panos have focused on the inferred prison encounters between Sheppard and Daniel Defoe, the probable ghostwriter of Sheppard’s 'autobiography'. The film is given its contemporary relevance/edge via its parallel to Great Britain’s first recorded financial crisis in the year 1720, the so-called South Sea Bubble, the background against which Sheppard’s life is played out/which forms the historical background to Sheppards’s life.

Kirschner’s and Panos’ critical costume film is put together from a patchwork of historical, literary and popular sources and explores the links between representation, speculation and the discourses of high and low culture, a theme already evolving in the 18th century and relevant to this day. Their narrative structure opposes a linear sequence of history; the film’s historical events jump back and forth between the months of the year 1724 and allow contemporary references to pop music, lifestyle and fashion to merge over the course of the story.

The archive materials that accompany the film are on loan from Peter Ross, a private collector in London who specializes in Jack Sheppard and has compiled print media and artifacts from 1724 to today. In the exhibition at Badischer Kunstverein, Kirschner and Panos present a selection of materials that, among other things, contains the first German edition of Sheppard’s 1725 biography. Through the inclusion of elements from the film set, plus reference and source materials, the artists’ progress has been integrated into the exhibition. This intentional/deliberate display of the film’s underlying structure plays with the definition of an “historical reconstruction” and underlines the necessarily subjective character of historical presentations. Thus new trails are blazed to allow an updated interpretation of the numerous political, social and cultural references to take place.

The Last Days of Jack Sheppard sets the life story of the burglar and thief within a complex web of capitalism, consumerism and an all-dominant criminal justice.
While Sheppard’s contemporaries were entertained by the stories of petty criminals, wild pursuits and public hangings, the protagonists were mostly victims of a repressive system, in which a tendency to speculation and prodigality was carried out on the backs of the working classes. The increasing criminality at that time was a direct consequence of economic instability and was combatted by disproportionately harsh penalties.

The film, however, also points to the features of 18th century popular culture, which are exemplarily reflected in the masks and costume balls. Under veiled faces and balloon-like robes, the boundaries between genders were blurred. Jack Sheppard was a master in staging himself within this world of deception and was repeatedly successful in slipping through the cracks of the system. In doing so, he became a plaything in a society that had long recognized the ‘market value’ of his biography and, already during his lifetime, had reduced him to his literary and fictive function.

The Last Days of Jack Sheppard was commissioned by the Chisenhale Gallery in London and the Centre for Contemporary Arts (CCA) in Glasgow in 2009.

Anja Kirschner & David have been shortlisted for the Jarman Award 2009