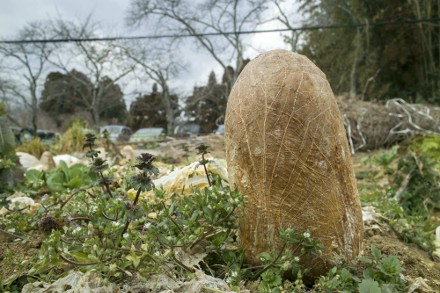 The collaborative exhibition by Elke Marhöfer and Mikhail Lylov at Badischer Kunstverein revolves around two current films as well as a number of space-structuring objects that reflect Marhöfer‘s and Lylov‘s interest in the interplay between human and nonhuman protagonists.

The title of the exhibition, Quantum Attentiveness alludes to the artists' interest in the philosophical, ethical, and political implications of an evolving concept of ecology. Ecology, once understood as a study of "relations between organisms", became a key term to think the world in relational terms. It does not merely convey a general sense of relationality, but has indefinitely proliferated linked variations: ecology of thought, visual environments, media, forests and practices, of time and self.

Because ecological thinking brings about an acute awareness of connectedness, it also generates an ethical and political challenge of exposure to the possibilities of unexpected relations, unpredictable filiations and spontaneous alliances. It seems that the awareness of uncertainty and inevitability of being-in-relation offers two possible ethics: one of control, environmental computation and advanced causalities and another of strange couplings, cuts and jumps. With this exhibition Lylov and Marhöfer are trying to embrace aesthetics offered by the latter tendency while being critically aware of the former.

The title Quantum Attentiveness is a queer unpacking of Karen Barad’s “diffractive methodology”. Quantum in this context refers to the non-reducible difference between terms of a relation. Hence the exhibition renders quantum as an aesthetic category, a way of seeing and showing a relation through difference. Paraphrasing Barad: a diffractive methodology is a method of attentively and carefully noticing differences while recognizing that there is an ethics, which is not predicated on externality, but rather entanglement. Entanglement, Lylov and Marhöfer comprehend as a back and forth movement between interior and exterior, between artwork and perceiver, but also between plants, animals, environments and humans. With this exhibition the artists want to direct attention towards the creative powers and practices of plants, animals, matters and environments.

Elke Marhöfer (*1967 in Baracoa, CUB) and Mikhail Lylov (*1989 in Voronezh, RUS) have been working, conducting research and collaborated on a variety of projects ranging from films to texts and books for a number of years. Their individual as well as their collaborative works have been shown at exhibitions and screened at film festivals in Europe and Asia.
www.badischer-kunstverein.de