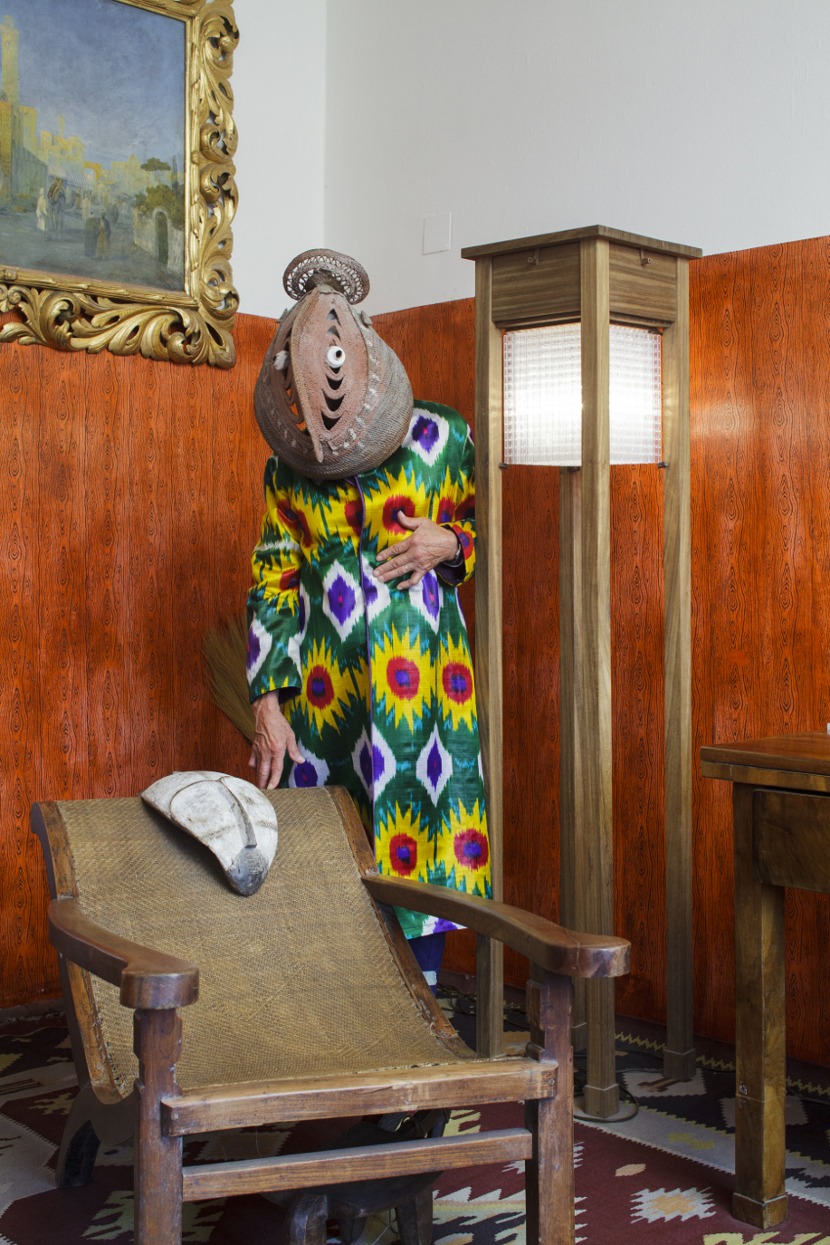 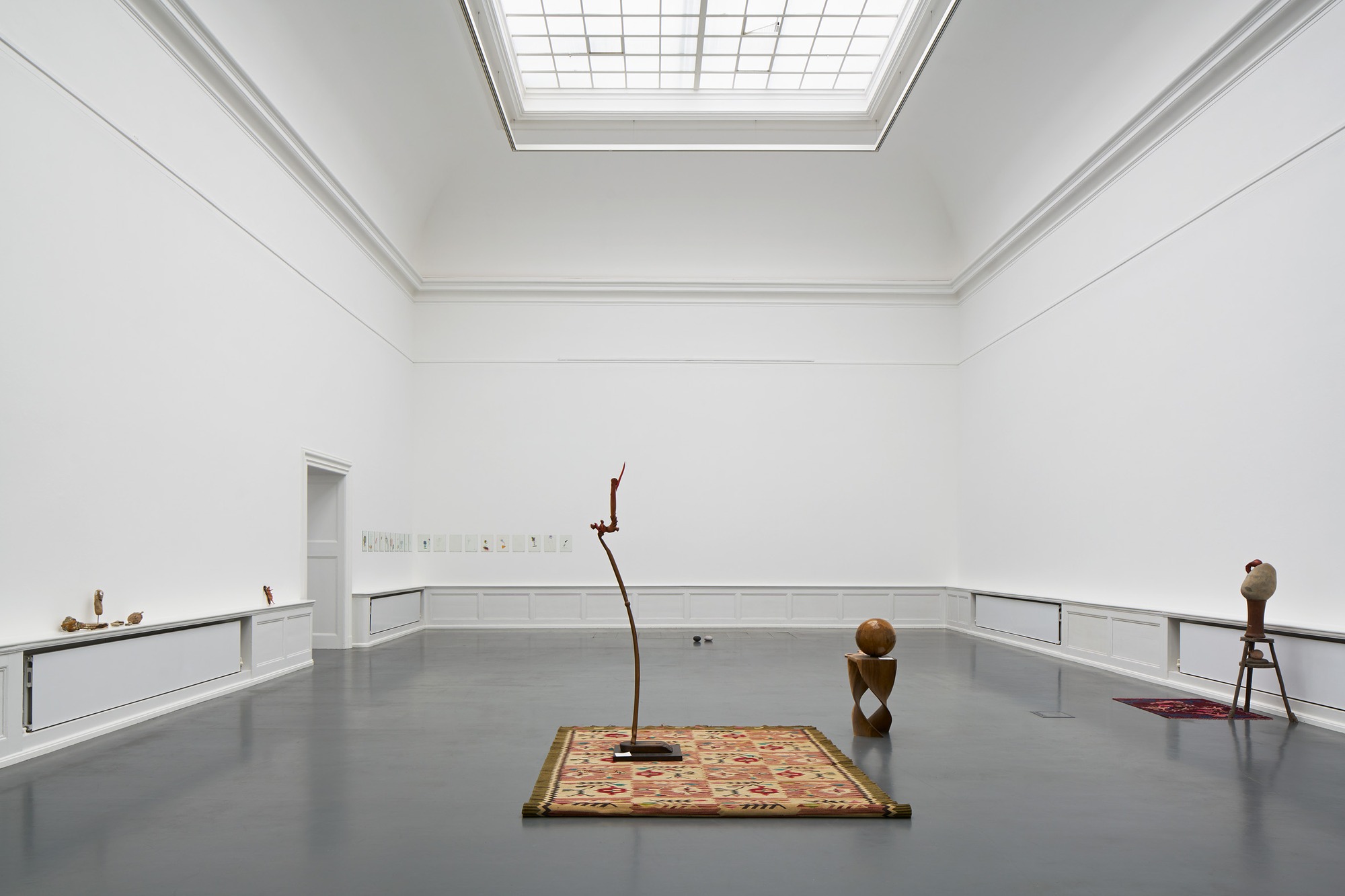 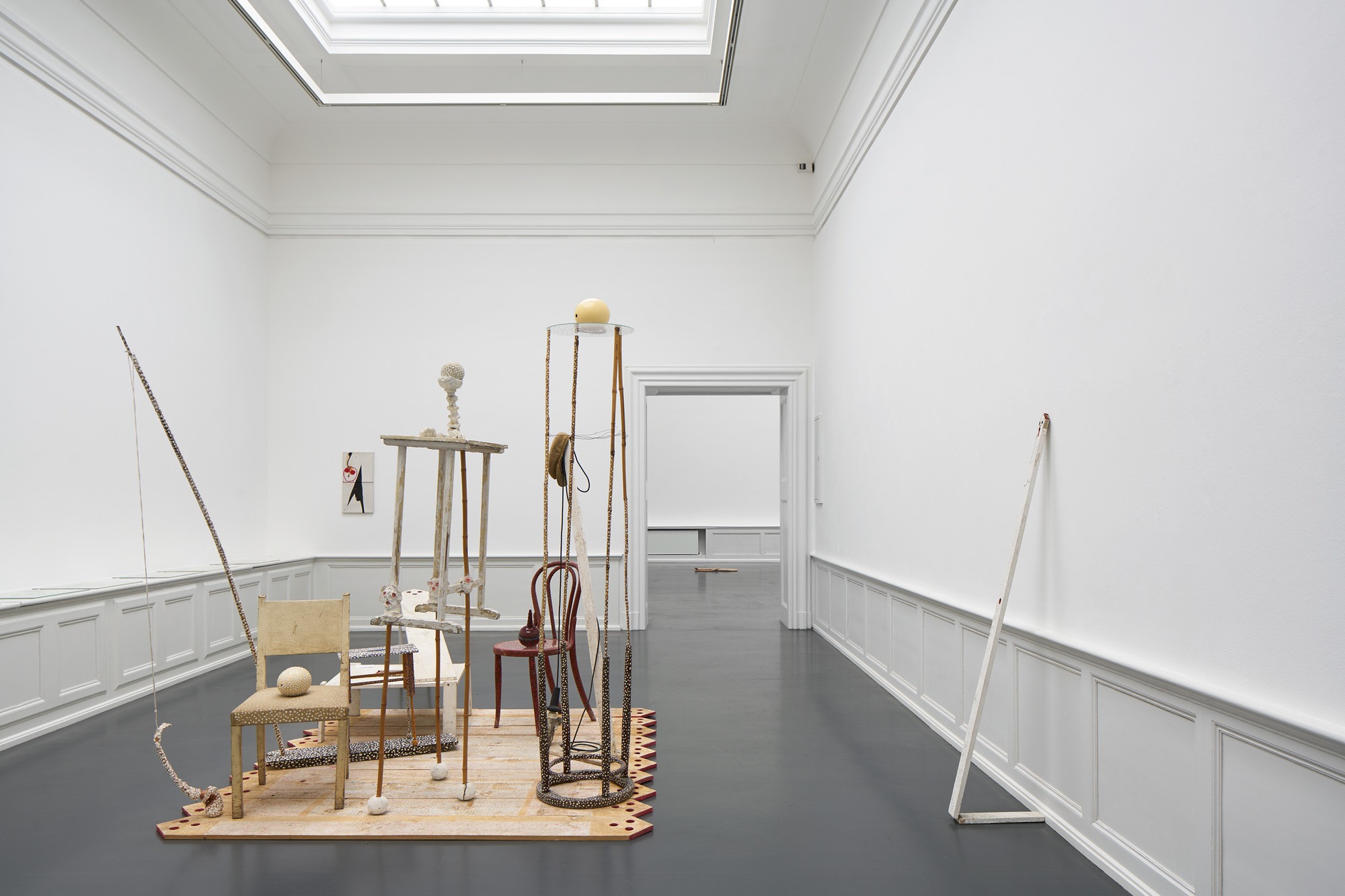 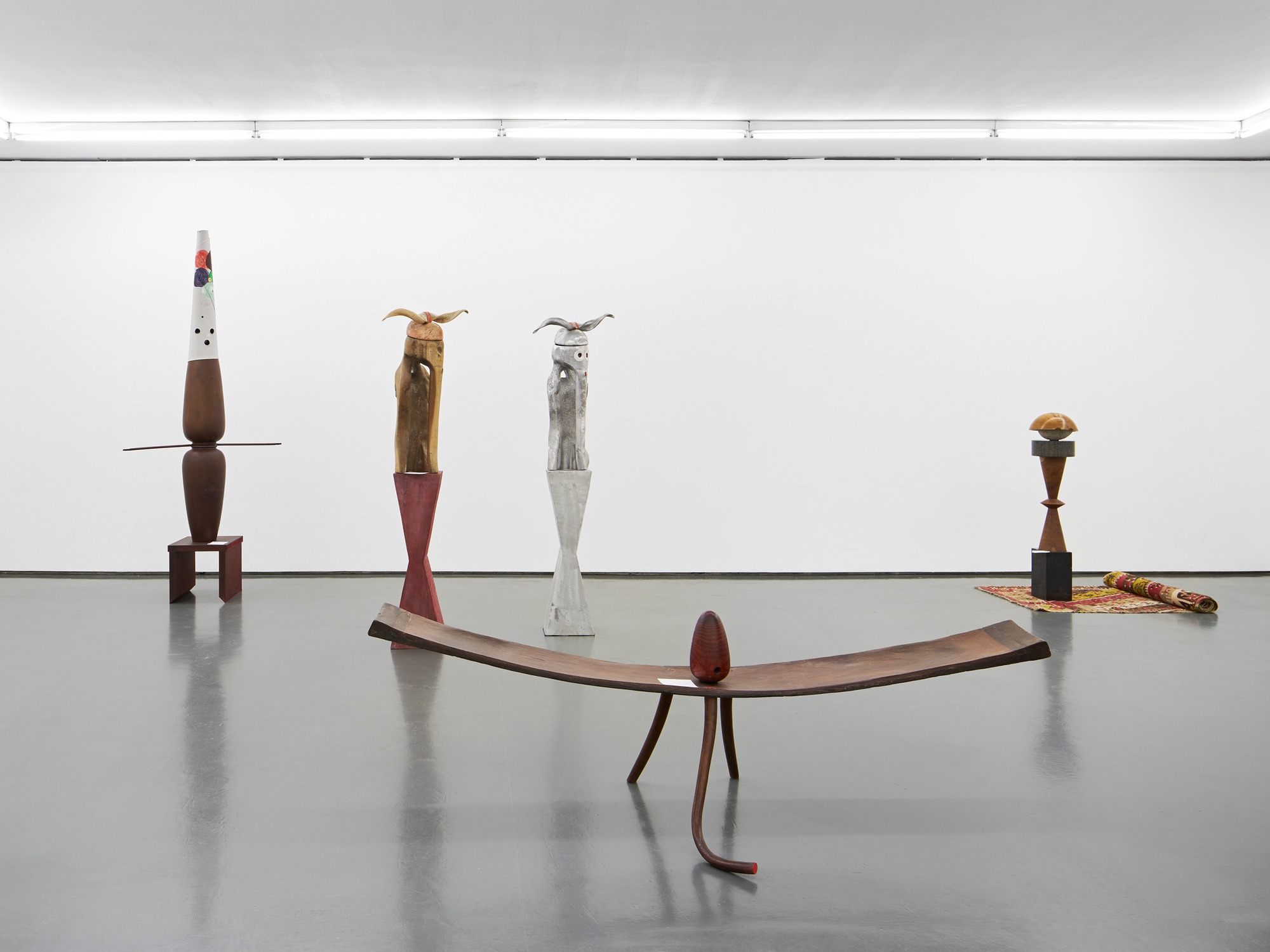 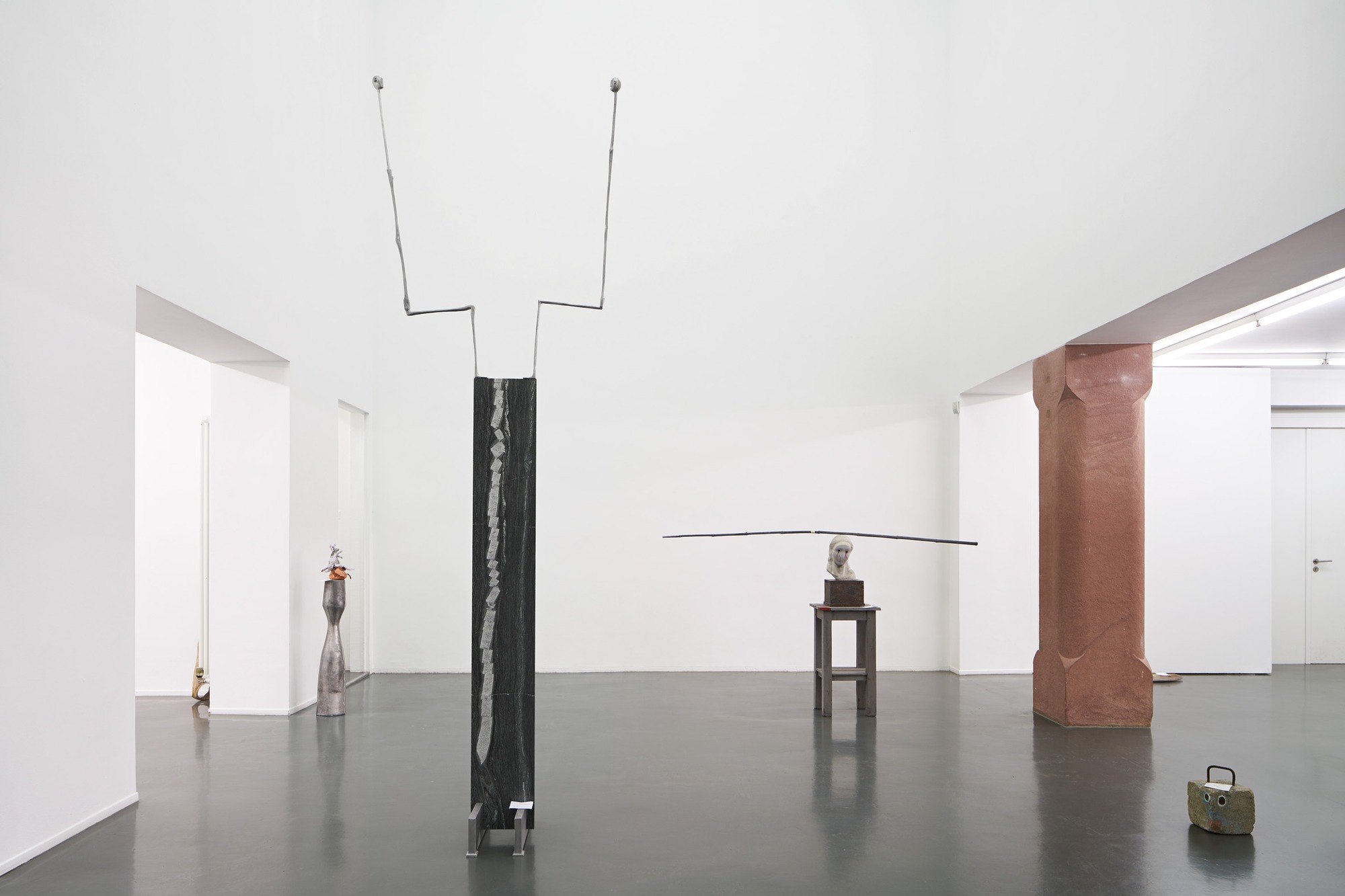 Heinz Frank, Selbst flüssig, klammert sich an überflüssig, Badischer Kunstverein, Karlsruhe 2019. Photo: Stephan Baumann, bild_raum
Badischer Kunstverein has organized the most comprehensive solo exhibition to date of works by Heinz Frank – one of the most idiosyncratic personalities in the Viennese art scene in recent decades. The show presents a cross section of Frank’s artistic and linguistic figures of thought since the early 1960s. Selbst flüssig, klammert sich an überflüssig forms a stage for the performance of a drama that is enacted by paintings, sculptures, objects, items of furniture, masks, carpets, and rocks, as well as found objects, one whose protagonists are (for example) “nothingness, the immensity of the hole, the circle whose center pledges its loyalty.”

Born in 1939, Frank worked as an electrical engineer before studying architecture at the Academy of Fine Arts in Vienna. For the Viennese scene, the artist is the grand master of the play of language and forms through which he – in his perambulation through the locales of the city, and clad in his idiosyncratic, dandyesque attire – pits a radical form of subjectivity against the conventions of the present day. The exhibition title, Selbst flüssig, klammert sich an überflüssig (Himself Fluid, Clinging to the Superfluous) is the text of a sculpture by the same name, which dates from 1984, a fragile multipart structure that towers up into the heights. Language games form an essential element of this artist’s oeuvre. Using “whichever paper,” Frank notates his ideas in micropoems and aphorisms which resemble haikus. He uses pencil because it is “erasable, then the texts can come back when needed.” These texts are the beginning and end of every work, a process of thought and its visualization through an object.

Frank’s works describe their own condition, so to speak, and the actual reason of their physical existence. Inscribed repeatedly in the forms that emerge from these words are the imprints and impressions of Heinz Frank’s own body. One instance of this being the sculpture that gives this exhibition its title, through which imprints of the artist’s palate are brought to appearance in an ornamental fashion. Frank writes his body and those of his works from out of sensations, because he has already come upon these accidentally in some discarded thing, which Frank tries out in his casual, persistent way, until he has somehow thought it (through), and subsequently disposed of it as a work. “But Frank’s thinking isn’t a process; it is a Sisyphus-like making of holes. For him, reflection is an attempt to reach behind his head, even when the mush does not stop there. In the helplessness of language, which nonetheless is to accommodate everything: the non-formed – transforming – into the formless.” (Hermann Czech).

Heinz Frank is the eminent background figure of the Viennese art world of recent decades. Everyone knows him, and everyone has learned something from him. What? The thing that he knows best: the thing which, all in all, he manages only with the greatest difficulty: namely himself.
Curators: Hedwig Saxenhuber, Georg Schöllhammer and Anja Casser