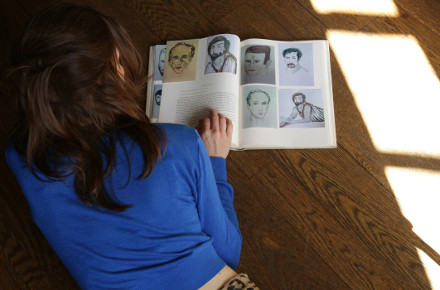 Kerstin Cmelka: from the series Circumstance and Circumvolution, 2015
Badischer Kunstverein presents the artist Kerstin Cmelka in an extensive solo exhibition. Cmelka works primarily in the media of video, photography and performance. Her works often depart from popular models of theatre, art and film, which Cmelka adapts and re-stages.

The exhibition centres around the micro-dramas that she has been producing since 2008. These are, on one side, short dramatic fragments, folk songs and folk plays, in which the artist re-enacts familiar theatre dialogues, clichéd movie scenes, talk shows, or private conversations with people from her immediate surroundings, and treats them with subtle distancing effects (Mikrodrama Installation 2010). On the other hand, in her most recent microdrama production (Mikrodrama #11, 2014), Cmelka has invited amateurs and professional actors to realise especially written scripts together. Here the artist is director and actress at the same time, skilfully alternating between the characters. Various constellations of power in art and life are unmasked in a socio-critical manner; however, rather than becoming representations of staid stereotypes these structures are re-activated as productive forms, often in a humorous way.

The texts for Mikrodrama #11 are based on private conversations with artists of Cmelka’s generation and revolve around a desire for adolescence. This is also the theme of the photo series with the same title, in which photos of the protagonists of Mikrodrama #11 from their youth are re-photographed and fragmentarily staged. The textile sculpture is an enlargement of a well-known item in a child’s room and functions like other elements of the exhibition as an independent sculpture and as a seating place to rest and watch the videos. Built-in doors separate the individual installations from one another, so that the exhibition spaces seem like rooms in a large flat.

Starting from these existing works, Cmelka expands her interest in the techniques of professional acting – or what is commonly regarded as such – in the exhibition at Badischer Kunstverein. A new photo series deals with the “song and dance exercise”, an element of “method acting,” in which a coach animates the actors to intone a song which they have selected and to combine it with spontaneous movements. As the exercise involves the whole body, it helps to release tension and reduce habitual bodily patterns, while focusing energy and enhancing concentration at the same time. After being thus “re-composed”, the performer can “refill” his or her most important tools, the body and the voice, with experiences and memories pertinent to the role. In this way, the most important method of “method acting”, “emotional recall”, can be carried out almost instantly. A new theatre performance entitled “The Song and Dance Exercise” continues the photo series and a specially composed sound installation. It premieres together with a concert by Pasadena Projekt on 6th March.

The exhibition also becomes an opportunity to seriously address collaboration or complicity within Cmelka’s practice. The artists Manuel Gorkiewicz, Mario Mentrup, Hanno Millesi and Mandla Reuter have been invited to integrate single works into Cmelka’s installations, the very ones in which they were involved as actors, advisers, mentors, or friends. Manuel Gorkiewicz has designed a new sculptural work for the performance stage, which also takes up text fragments from the performance. “Shuteye”, programmed by Mandla Reuter, is a vending machine for drinks, which – similarly to Cmelka’s video installations – follows an artistic choreography. The alternating soundtracks in Mikrodrama #11 are interrupted by the music piece “Springtime” by the actor Mario Mentrup (Pasadena Projekt) and interact with the loops of the videos. The author Hanno Millesi reads his text “Ambulanz”, which sounds from out of a braided vase in the Mikrodrama Installation 2010.

„Mikrodrama #11“ is presented in cooperation with Kunstverein Langenhagen.