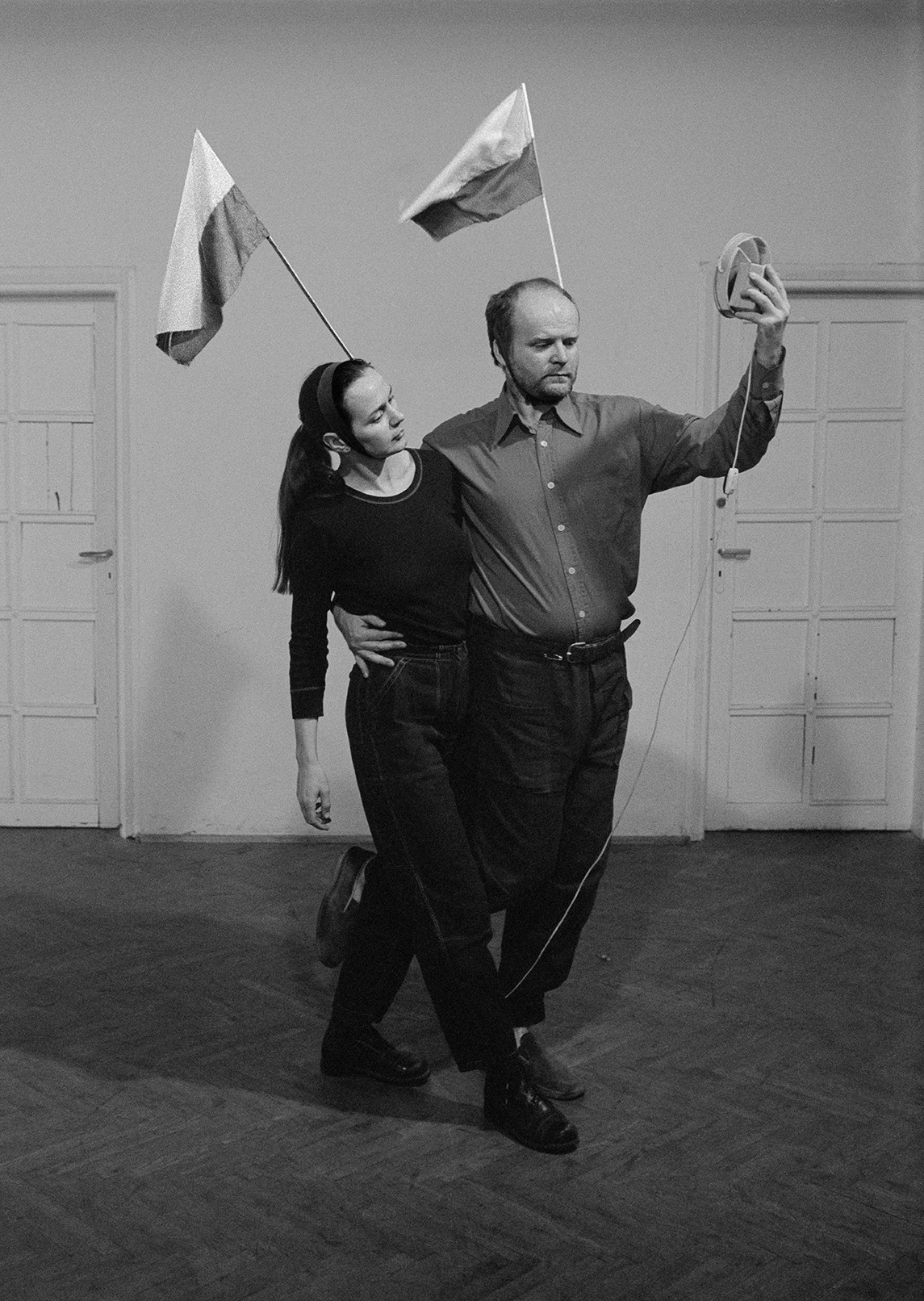 KwieKulik, Polish Duo I, 1984, archival inkjet print, 90x65cm © the artists, courtesy ZAK BRANICKA, Berlin
Badischer Kunstverein presents SHE and HE, the first comprehensive retrospective in Germany devoted to the Polish artist duo KwieKulik. It is also the first major exhibition organized by the Kunstverein during the jubilee year, and takes place within the framework of the 24th European Culture Days Karlsruhe.

Between 1971 and 1987, Zofia Kulik worked with Przemysław Kwiek, her former partner, under the joint name KwieKulik. The pioneering work of KwieKulik rewrote not only the history of Polish art during the postwar era, but also that of the European avant-garde as a whole. During their studies at the Academy of Fine Arts in Warsaw, the artists had already developed radical, interdisciplinary methods within the existing cultural and political processes of the socialist system. Alongside their work with photography and film, KwieKulik expanded the boundaries of established formats in the genres of installation, sculpture, and performance. In order to capture the improvisatory potential of their work in all of its facets, they coined the term “activities” for their art.

Influenced by the theory of “Open Form” propagated by the architect Oskar Hansen, an instructor at the Academy of Fine Arts in Warsaw, as well as by various exercises assigned by their professor Jerzy Jarnuszkiewicz, which introduced everyday and vernacular objects into sculptural and performative processes, KwieKulik developed their own performative strategy, which departed deliberately from the formal codes of modernism. They were far more interested in the emergence of new, ephemeral and process-oriented media and materials that corresponded to their artistic and political thinking.

For KwieKulik, politics and art, public and private, were inseparably linked. They were interested in a radical reinterpretation of the role of the artist in society. At the same time, their art was articulated primarily through collective processes and individual authorship was renounced in favor of common production. On view in the exhibition will be a number of these collective works including Excursion (Group Action, 1970), Open Form (1971) and selected projects from the body of work entitled Visual Games. Their central and probably best-known work, Activities with Dobromierz (1972-74), is also a key work in the exhibition at Badischer Kunstverein. In this photographic series, multiple settings depict the artistic couple’s newborn son, all of them oriented by mathematical logic. A series of works under the title Earning Money and Making Art visualizes various approaches to bringing commissioned works (public sphere) into contact with non-commissioned works (private sphere). The exhibition concludes with a group of works, exhibited under the rubric He and She, which features actions produced by KwieKulik during the 1980s, marking a turning point in their collaboration. During this period, the two artists began to define their roles as an expert “Her” and an expert “Him” more independently of one another.

The KwieKulik archive encompasses photographs, slides, film material, text, drawings, and prints. SHE and HE is not just as an attempt to contextualize an enormously wide-ranging artistic achievement, but also poses questions concerning current and future possibilities for dealing with artistic archives.