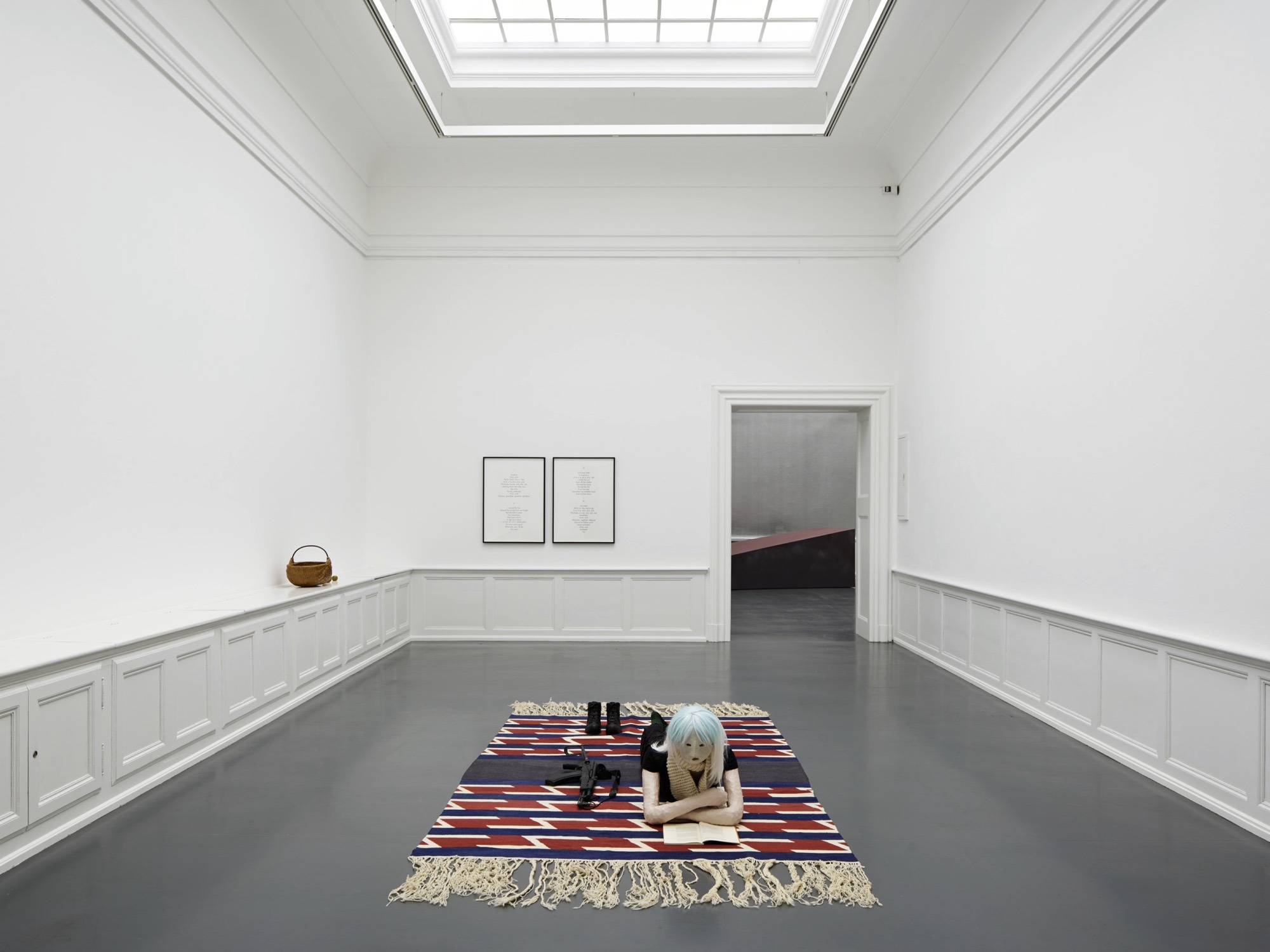 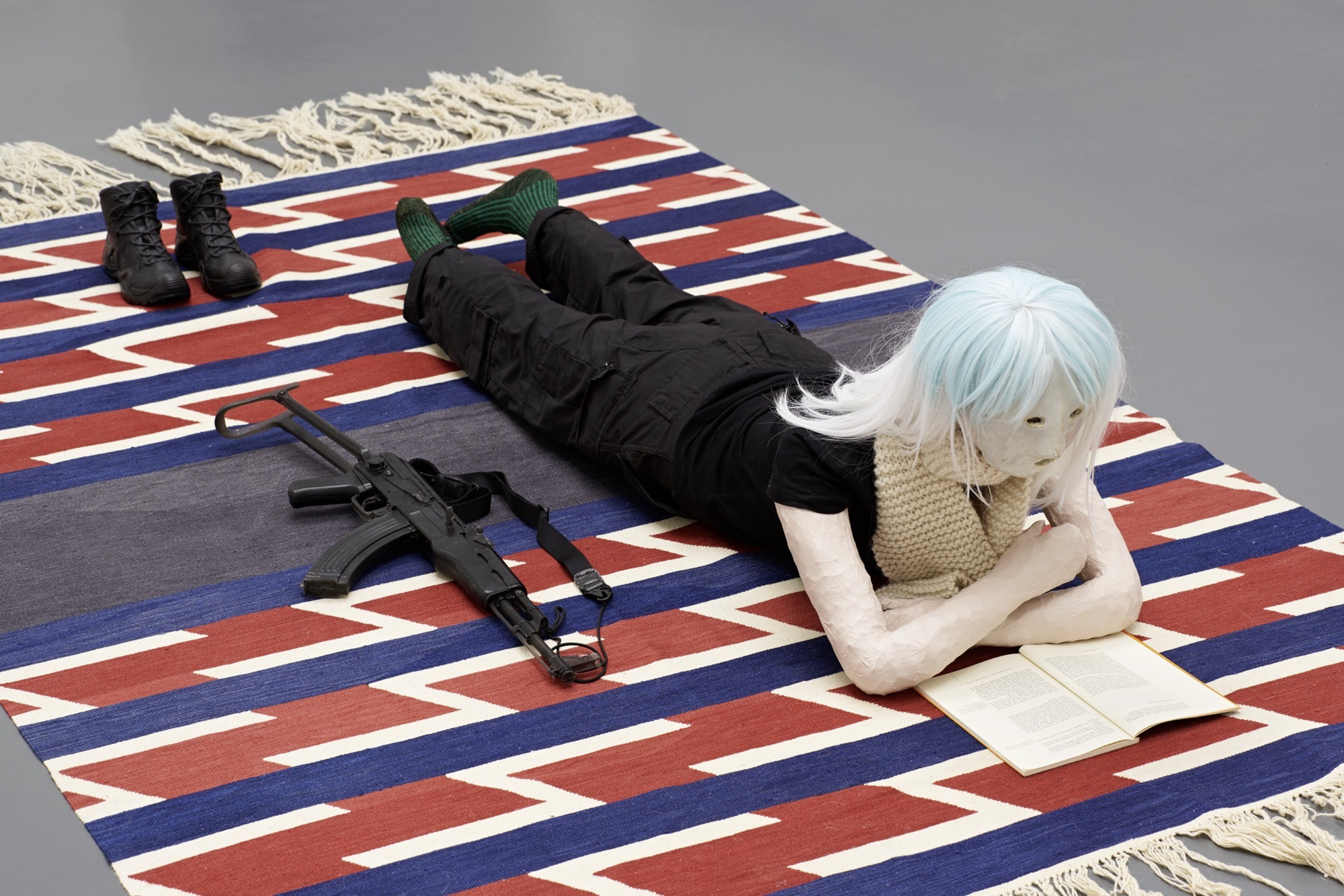 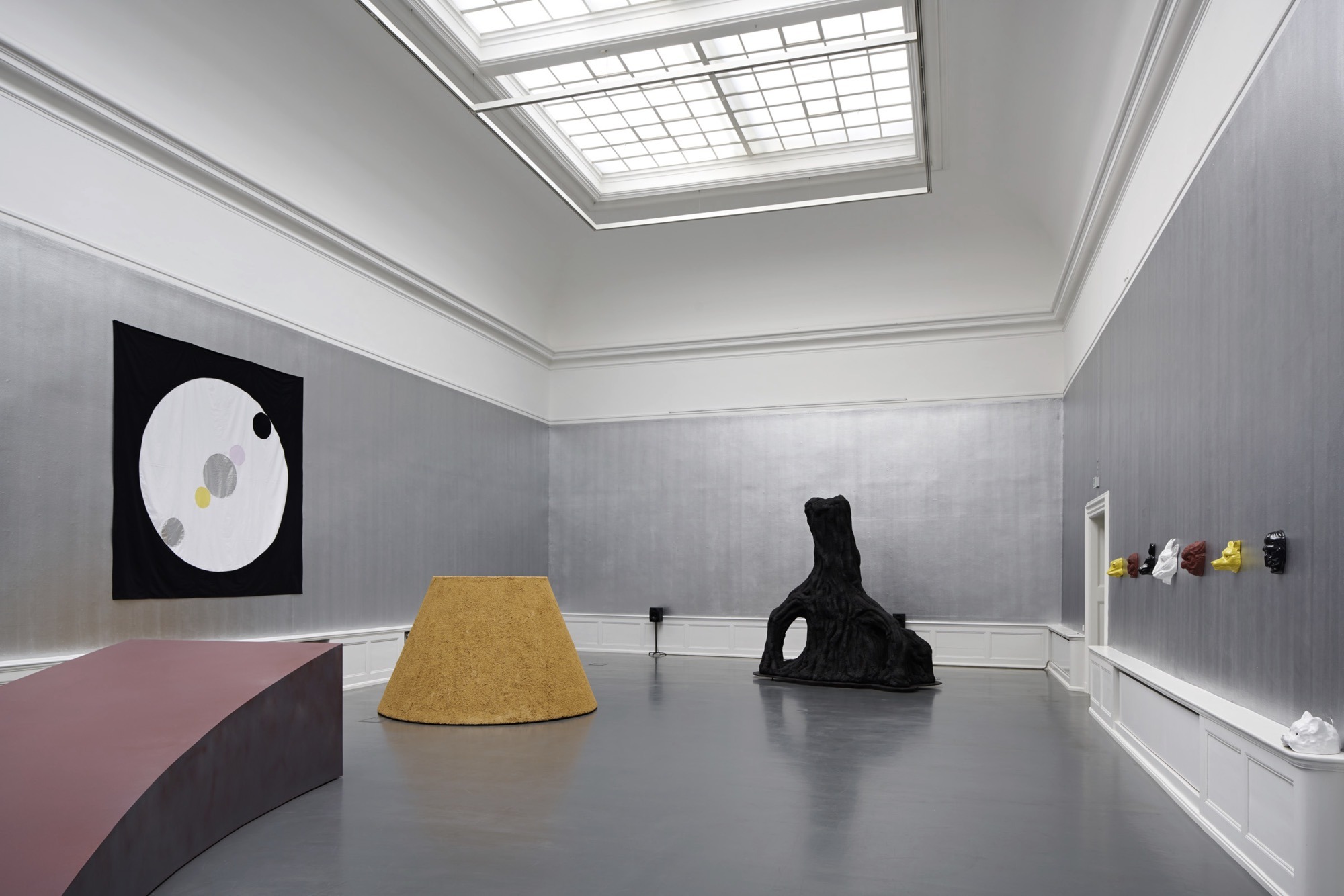 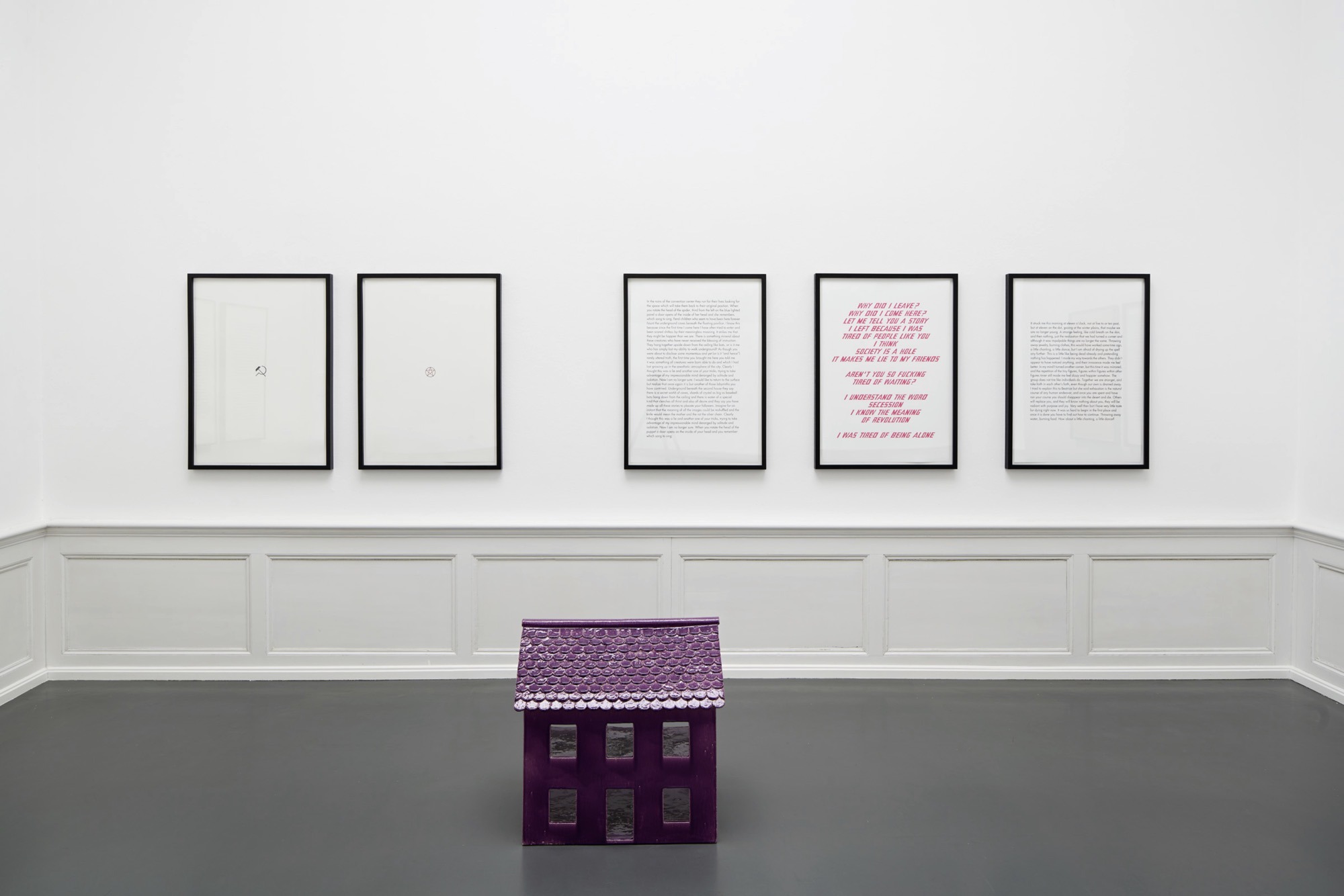 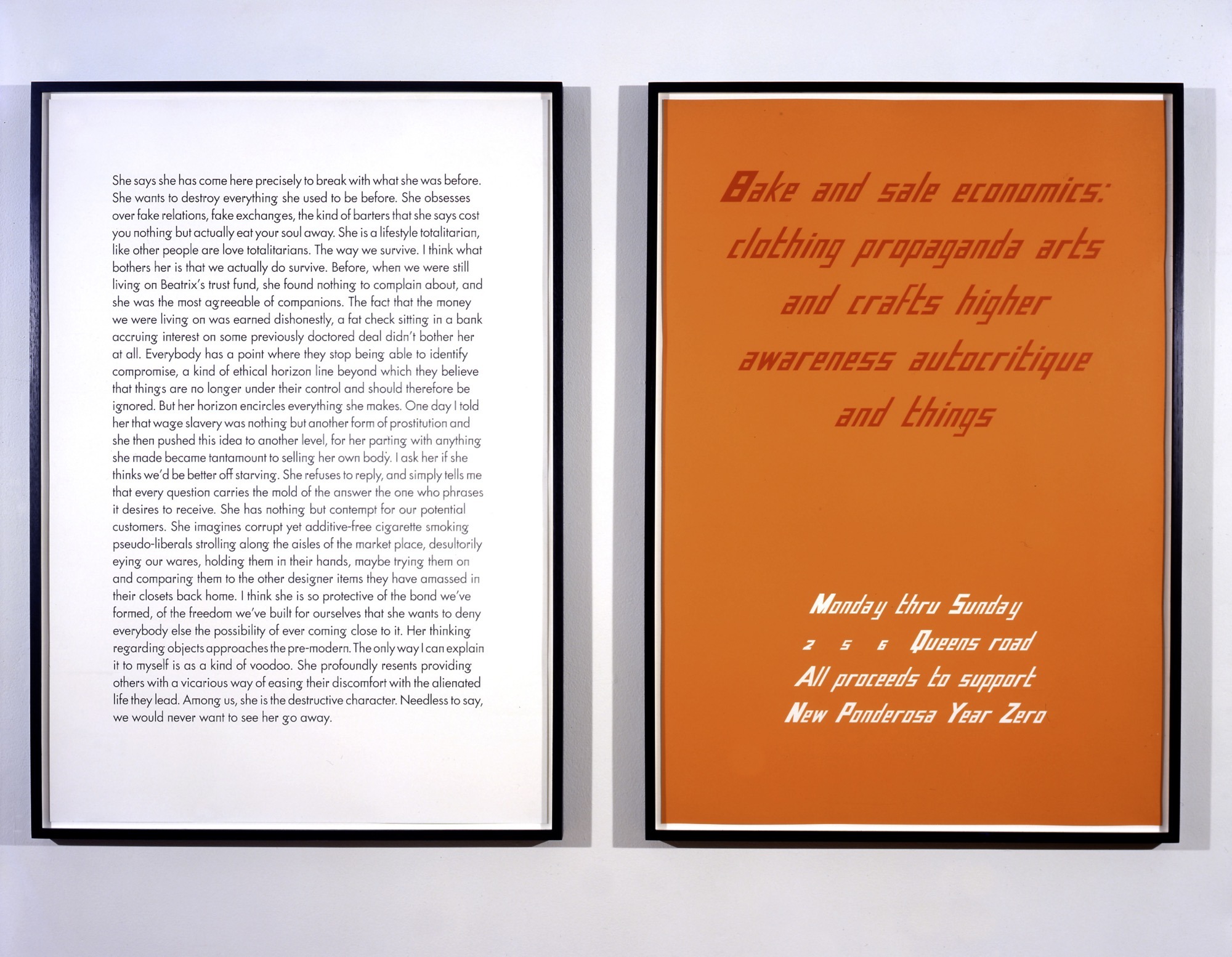 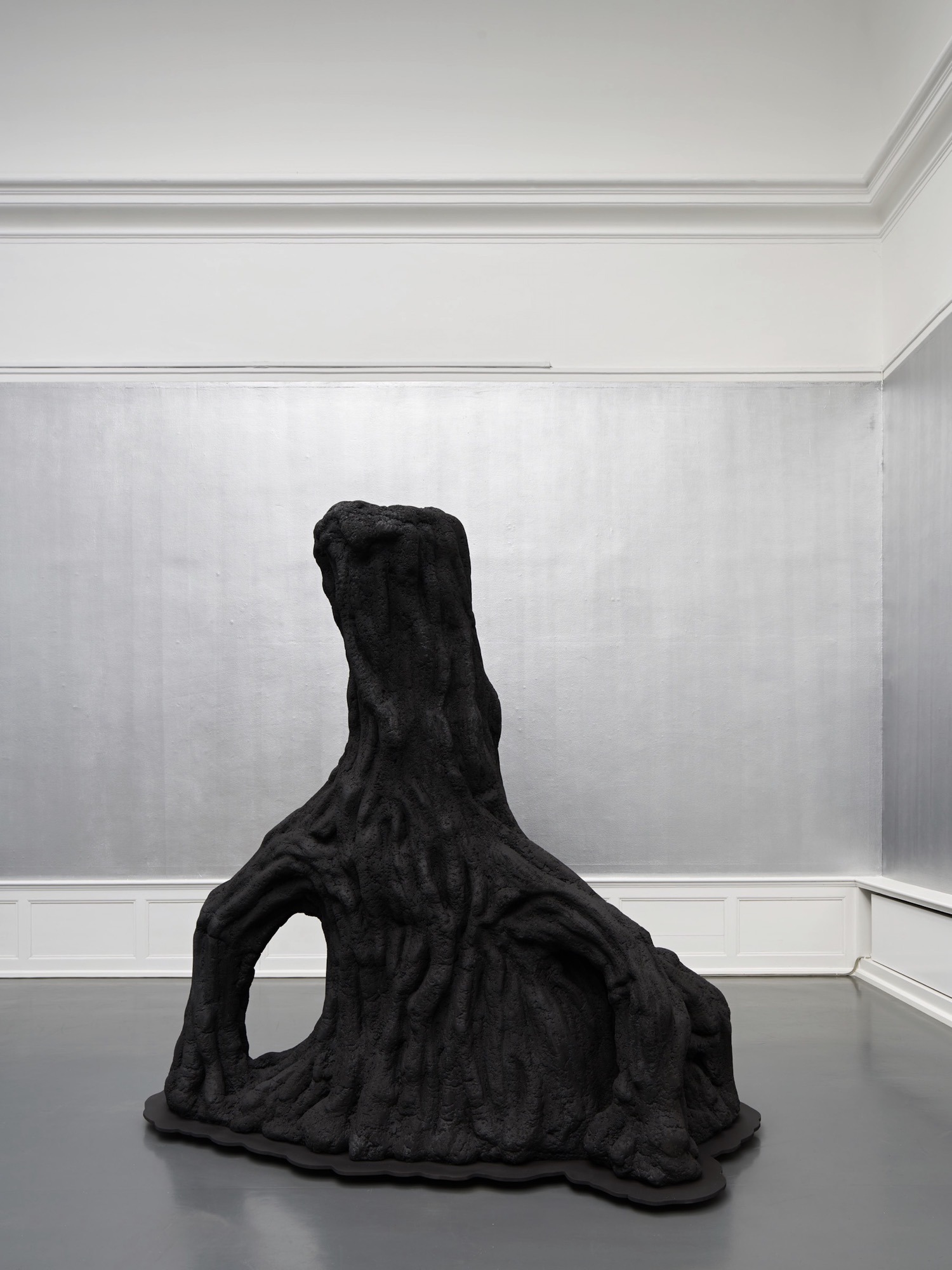 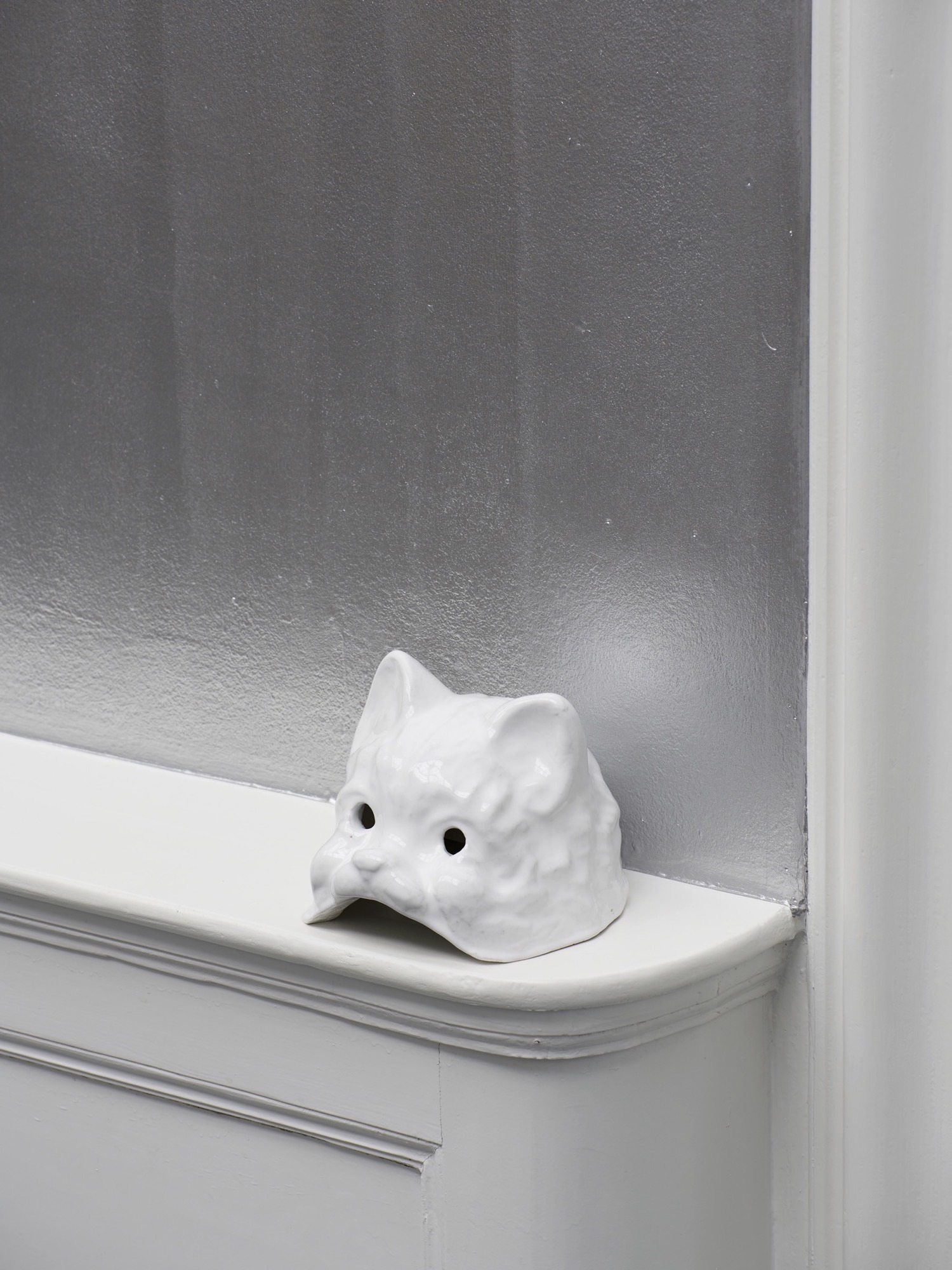 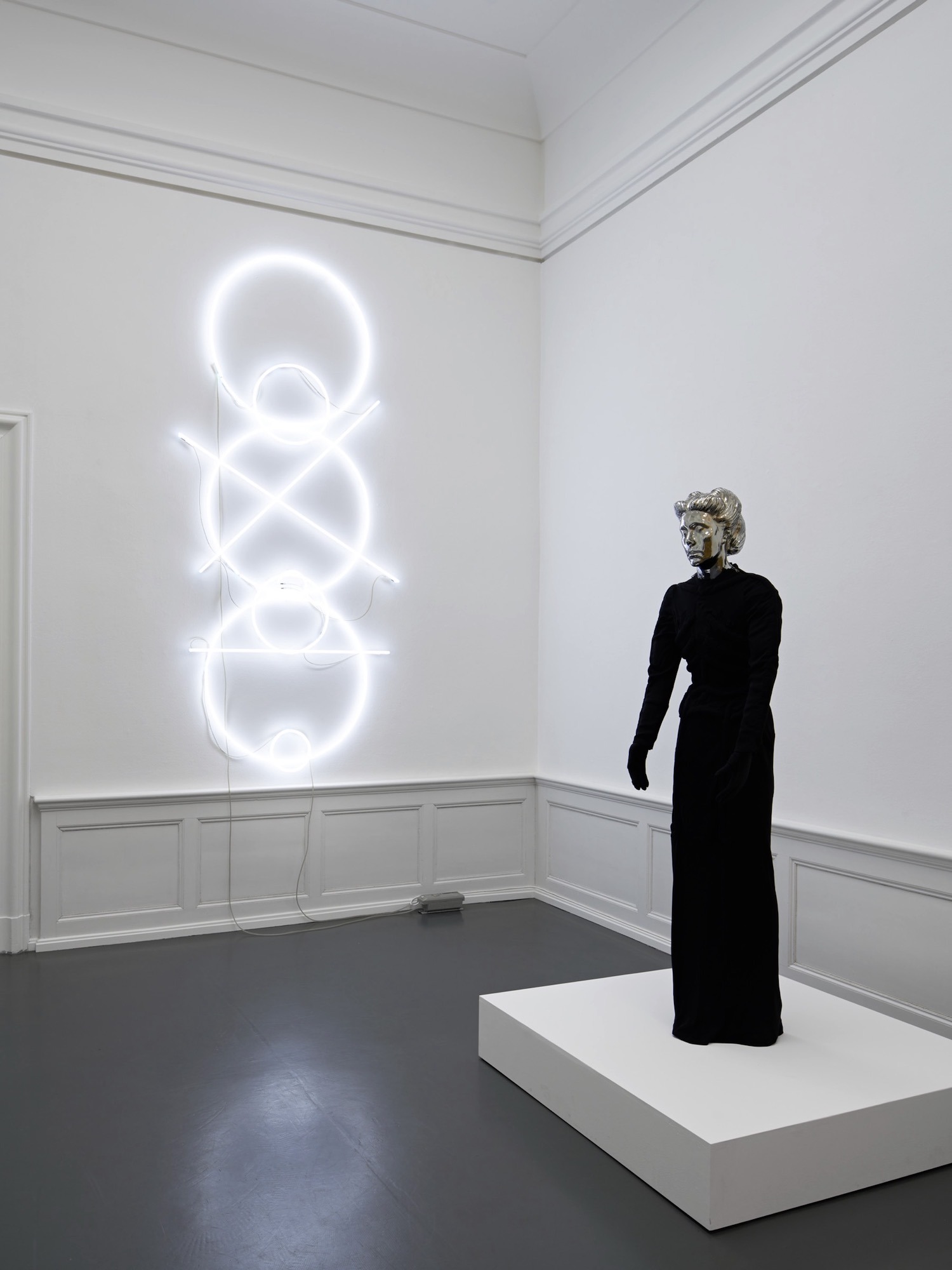 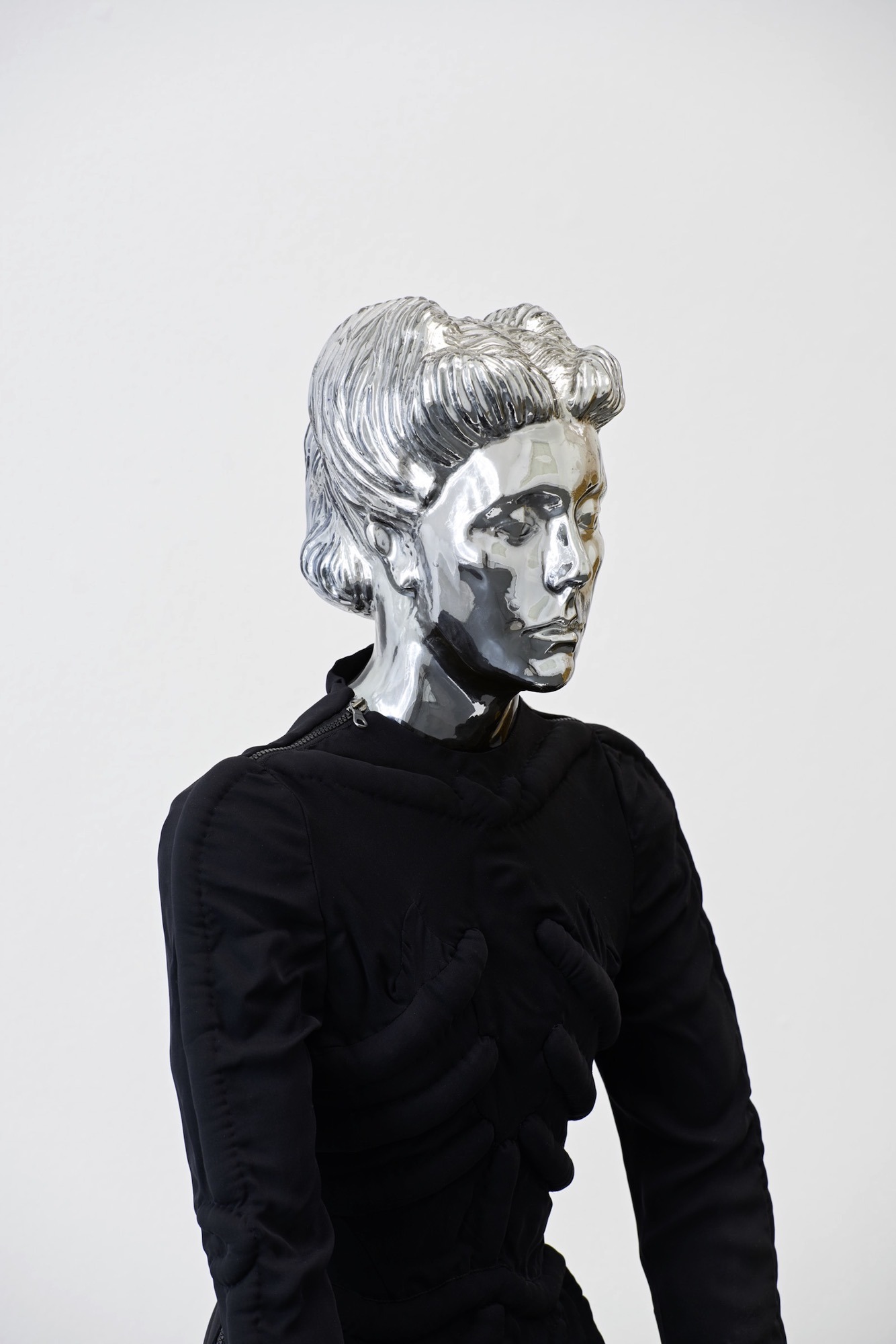 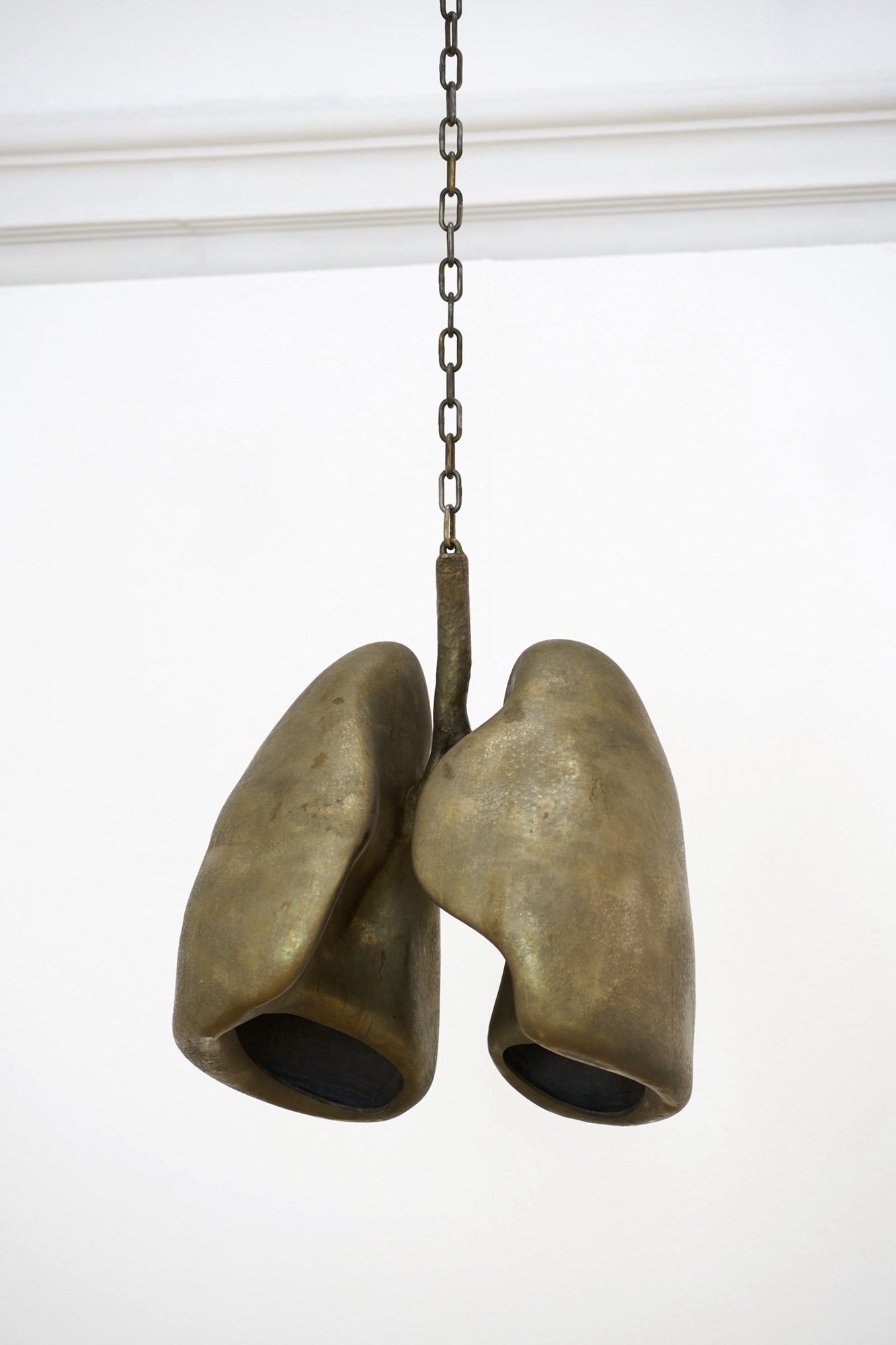 Grammar and Glamour presents Mai-Thu Perret’s first major solo exhibition in Germany. Perret works with diverse formats and media, including painting, sculpture, ceramics, tapestry, film, performance, and texts. In her work, the artist turns her attention toward a discourse of feminism and spirituality which she associates in a singular way with artistically immanent questions of materiality and form. Her handling of a variety of ceramics and tapestry techniques refers to Perret’s interest in the arts and crafts movement as an alternative form of artistic expression. Realistic sculptures depicting female fighters and reformers are linked in the most intimate way with approaches to formal abstraction, which moreover reference her continuous scrutiny of painting and the possibilities of painterly transformation. But Perret’s oeuvre is by no means self-referential; it is instead bound up with concrete narrative contexts. To some extent, her stories are based on direct references from literature and theory, while other contexts are invented by the artist herself, and circulate around a number of different works or work groups. Perret uses her works as a speculative space in order to activate marginalized forms and techniques, to animate forgotten figures and to narrate alternative stories that challenge the linearity of conventional narrative structures.

Based on Mai-Thu Perret’s large-scale project The Crystal Frontier (since 1999), about a fictive feminist commune in the New Mexico desert, the exhibition weaves together various narratives about strong, independent female figures – from the lesbian fighters in Les Guérillères (2018), based on a novel by the French avant-garde writer and feminist theoretician Monique Wittig, to the originary figure of the witch, as reflected in the most recent works in the exhibition. While Wittig’s disruptive language evokes a series of works that engage with strategies of interruption and repetition, and link these techniques with Dada, Perret’s investigations of witchcraft led to a group of large-scale objects that have been reconstructed for the exhibition and are reminiscent of marshlands, forests, or the minimalist geometry in Zen gardens. The artist stages witchcraft as a fundamental power in relation to disciplinary strategies, capitalist systems, and forms of societal conformity to. The witch as archetype is transferred into the modern world, and becomes a symbol of struggle against restrictive gender politics.

The story of The Chrystal Frontier is present in the exhibition through a series of texts in which the women of the “New Ponderosa” commune envision a new world, one they seek to establish via a return to nature and to crafts. Initially, Perret’s ceramics, wallpapers, clothes, and tapestries must be read against this background, and are interpretable as different artifacts of the fictive production of the women of “New Ponderosa” before these objects emancipate themselves increasingly from their narrative. Through an explicit affinity with the Bauhaus and Constructivist movements, the artist envisions a new society in which handicraft production and ornamentation experience an emphatic revaluation: no longer are they the excluded testimony of domestic décor, but instead a powerful expression of a feminist inscription into the male-dominated art history of the West. At the same time, they clarify Perret’s intensive preoccupation with the early 20th century avant-gardes, and in particular their potential for political and formal emancipation.

Mai-Thu Perret (*1976) lives and works in Geneva, Switzerland. She is known for her multidisciplinary practice in scupture, painting, video and installation art. She studied English at Cambridge University and was a participant in the Whitney Independent Study Program 2001/2003. In 2011 she won the prestigious Zurich Art Prize and the Prix Culturel Manor. She is the recipient of the 2018 Paul Boesch Award. Since 2008 Perret is a professor at Haute école d’art et de design in Geneva. Her most recent solo shows include Spike Island, Bristol (2019) and at MAMCO, Geneva (2018).

In the performance The Blazing World by Mai-Thu Perret, the sculptural elements of her installation Superpotent (2019) become a stage for a number of actors. The Blazing World was created in the framework of a workshop at the Geneva School of Art and Design (HEAD – Genève), and is being performed in Germany for the first time by Mai-Thu Perret and the singer Tamara Barnett-Herrin, together with students from the workshop, here in the Large Gallery of the Badischer Kunstverein.

The performance thematizes the cultural significance of the witch as a representative of a nonconforming, anti-capitalist way of life. The witch stands symbolically for the struggle for the rights of women who evade societal expectations, live in locations set apart from civilization, and strive to establish their own handicraft production. "When Paracelsus, in Basel, in 1527, threw all of the medicines into the fire, he avowed that he knew nothing but what he had learnt from the witches." (Jules Michelet, The Witch, 1862)