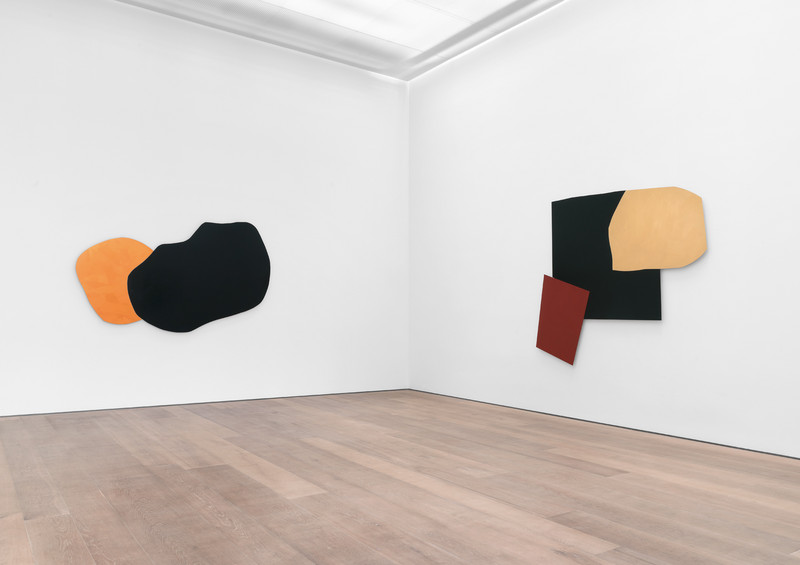 Imi Knoebel is exhibiting new works made in 2015 at Galerie Bärbel Grässlin. Many of them are entitled Bild (Picture), and dated. Also on display are Flags, named according to their respective color designation. There is plenty of material available to ruminate on titles. What is a picture? What role do the dates play? Are they the dates of the works’ creation or random days that deserve a dedication? What is a flag? Is it a sign of commitment to a color or an homage to Suprematism and Malevich’s Black Square?

The answers to these questions are not given verbally, but in shapes and colors: as Bilder, pictures within which soft and geometric color fields nestle together, leaving just a precise gap between them, enclose one another or seem to comment on each other. And as Flags, monochrome rectangles that subtly edge out of the square shapes. They have an aluminum base, onto which the artist applied paint with visibly generous, soft brushstrokes. The application of paint is delicate and extremely fragile, sitting on the warm surface of the aluminum without being absorbed by it. Its texture varies from dull and matte to a rich shine to a shimmering mother-of-pearl surface. The choice of colors is also delicate. Dark tones, just a shade away from black, and light tones just a tinge away from white. They are repeatedly shot through by strong statement colors; a red, a yellow, a gold. An ensemble that does not fill the exhibition space, but traverses, clarifies and extends it.

Imi Knoebel is the maestro of delicate colors and forms. Initially working only with red lead paint, since his show 24 Farben für Blinky (24 colors for Blinky, 1977) in Cologne he has continually expanded his color range. He tirelessly advances the concept of painting. The foundation stone for this was laid in Joseph Beuys’ class at Kunstakademie Düsseldorf in Room 19. From the line to the discovery of hardboard to aluminum, he has followed a path whose landmarks, the core pieces, were shown in 2015 at Museum Haus Esters. His countless prominent group exhibitions, including four documentas, were crowned in 2013 by an invitation to design the church windows of the cathedral in Reims, a glowing example of a successful Franco-German cultural transfer that will stand the test of time. Galerie Bärbel Grässlin has represented Imi Knoebel since the mid-1980s, in a cooperation that has lost nothing of its vivacity over the years. Indeed, the opposite is the case, as the current exhibition demonstrates.