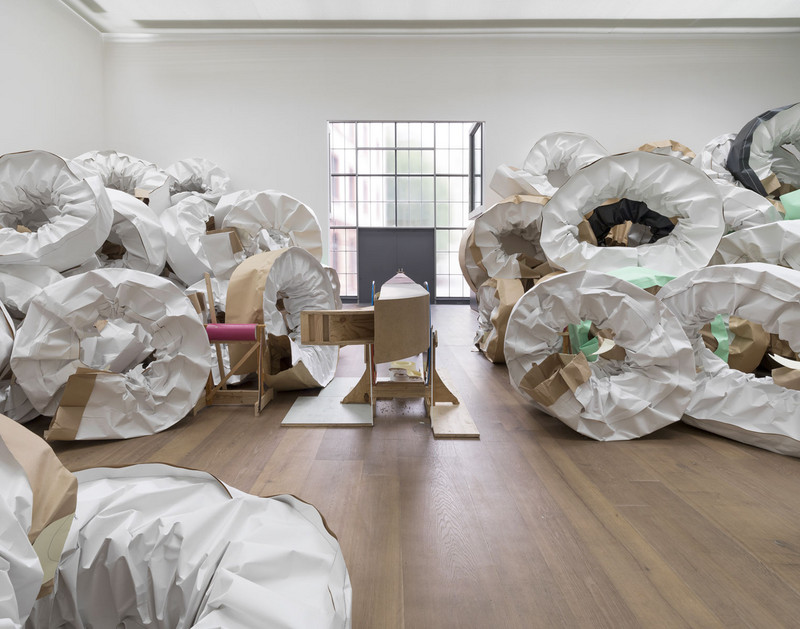 Status with loops and curls – There is a lot of hustle-and-bustle when Michael Beutler set about mounting his exhibition at Galerie Grässlin. As was the case in 2010, the gallery space has temporarily become the artist’s workshop in the run up to the show. At the center of the space and of the industrious goings-on stands a proto-machine, approximately 11 meters in length. It is a central element - and the starting point of the installation. A team of assistants uses this device to compress lengths of paper into loops and curls, which bit by bit gradually seize hold of the gallery space. With the individual elements of the work Beutler negotiates the preexisting spatial situation architecturally and historically, incorporating it and rendering specific aspects visible. The gallery rooms previously housed a second hand shop called Endless Summer, which is also the title of a legendary surf film. The shape of the proto-machine is based on a longboard, it cuts across the gallery’s central visual axis. The back wall of the gallery space remains empty – loops and curls pile up to form a mountain of waves on the central wall.

The pragmatic production process is more than evident in the finished installation. The individual steps can be reconstructed when the shape of the modules is traced back to its origin or when reading Beutler’s instruction, which lays out in meticulous detail what is needed and how to proceed in order to crimp the bundles. Here, Beutler in no way dogmatically eschews electric aids. And so this time a hand-held sewing machine was put to good use connecting the individual lengths of paper and creating a functional ornament, a seam that gives the finished object the look and feel of a ruffed trouser leg.

The installation tackles themes characteristic for Beutler’s work: architecture, work, efficiency, seriality and the question after the conditions under which art is made. Beutler uses industrially manufactured materials, brings these into shape with his proto-machines and with the forms, reacts to the architectural situations and specific characters of each interior or exterior space he works with.

In 2010 Beutler wove three-dimensional tapestries from corrugated board, which themselves became walls. And just shortly his work Polder Peil in the Dutch Zeeland was completed. He oriented his concrete sculptures formally towards an imaginary horizon line, reacting to the peculiarities of an artificially created landscape. The Bielefelder Kunstverein is currently showing Haus Beutler, an exhibition of what looks like an artist studio. It makes Beutler’s involvement with space and material as well as elements of his earlier projects evident by means of drawings, models, material studies, photo and video documentation.