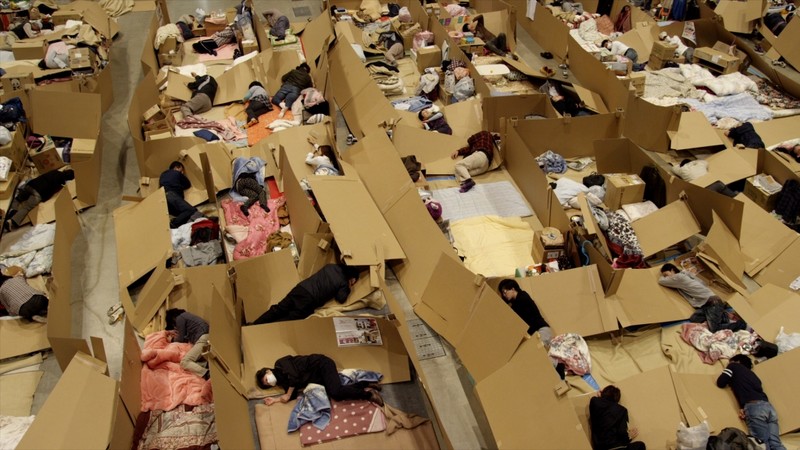 Uncovering the ecological ramifications under the regime of the Anthropocene, yet another exhibition—this time by artist Aernout Mik and titled Cardboard Walls—steers us towards the aftermath of the (un)natural nuclear disaster of 2011 in Fukushima, Japan. Claimed to be an act of nature, this event of huge global consequence might better be understood as a result of our enduring hazardous, obscene, and abusive genealogy of relations to both the environment and to each other. The installation addresses how what we thought we controlled (nature), or created and thought to control (capitalist doctrines), has in fact taken charge of our lives in an authoritative swoop, announcing loudly that the era fully engineered by the actions of humans has reached a level that batters the very prospect of survival. Shifting seamlessly from daunting questions of the planet’s future to present-day disparities of power and politics, and exploring the subsequent pressures that the status as refugee from one’s very own “humankind” have placed on individuals, the work weaves together the various lineages of thought that we have marked for ourselves as critically important for rethinking, and outliving, survival.

Aernout Mik (b. 1962) is an artist based in Amsterdam. The work has been produced by Aichi Triennale, Aichi and Aernout Mik, with additional support by the Mondriaan Foundation, Amsterdam and the Netherlands Film Fund, Amsterdam.
www.bak-utrecht.nl