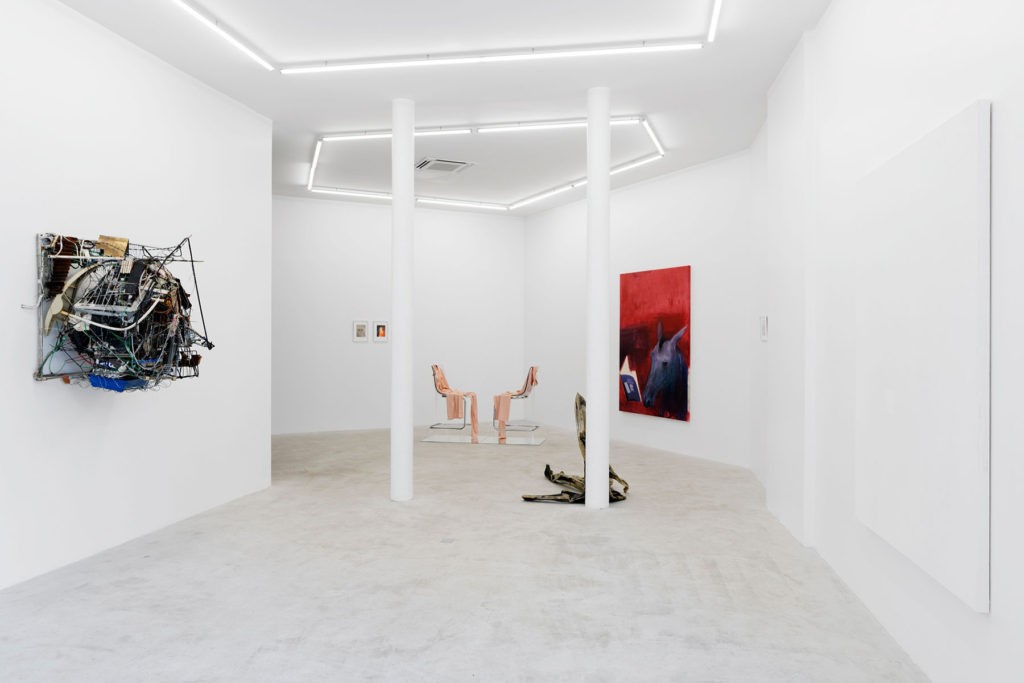 Balice Hertling is pleased to announce Ormai, a group exhibition with works by Meriem Bennani, Robert Bittenbender, Peppi Botropp, Xinyi Cheng, Kayode Ojo, Davide Stucchi et Tobias Spichtig. The exhibition will open on February 10th from 18h and will be on view until March 17th 2018 at the gallery’s space at 239 rue Saint-Martin.

“Ormai” is an Italian word that can be hardly translated. It is often used as an exclamation to comment the consequences of an impulsive and uncontrolled action. It could refer to the idea of resignation, but also acceptance and gaining. It could also comment the discovery of a new found peace and celebrates the power of spontaneity and frankness.

We like to believe that art making is also the result of impetuous act and not a rational thought. “Ormai” is the title of this group show that aims to show the work of artists that deal with the intensity of spontaneity and the beauty of the unexpected.

New York based artist Meriem Bennani explores and celebrates the female figures of her native Marocco and captures the spontaneous energy of the streets of her hometown through the medium of video. Once seized, those materials are then integrated in her sculptural and challenging installations. Her work has been shown at the Kitchen, MoMA PS1 and the Jewish Museum in New York.

Robert Bittenbender’s sculptural works are the result of an obsessive process of assembling different materials. Only apparently chaotic, most of his works represent the compromise between consciousness and unconsciousness. His work has been part of exhibitions at Herald Street, London and Lomex, New York, where the artist lives and works.

German artist Peppi Bottrop metaphorically uses charcoal in most of his work. Born and raised in a city in the Ruhr region that had been a coal-mining and rail center and contains factories producing coal-tar derivatives, Bottrop developed a very specific relationship to the material, using mainly charcoal in large size gestural paintings, exploring further the meaning of this material. His upcoming shows include a collaboration with Albert Oehlen at Marciano Foundation in Los Angeles. He previously has had shows at Fondazione Carriero im Milan and Jan Kaps Gallery in Cologne.

Chinese artist Xinyi Cheng is gaining recognition through her figurative paintings that explore issues such as gender representation and human interactions. For this show she presents for the first time her photographic work, a series of snapshots that capture situations around her and celebrate the poetry of the accident. She has had a solo show at Balice Hertling in 2017 and is preparing her first solo exhibition in Shanghai at Antenna Space gallery.

American artist Kayode Ojo’s work filters different aspects of contemporary life by exploring mass produced design objects as well as popular culture, advertising strategies and cinema. For the show, Ojo was inspired by François Ozon’s “L’Amant double”, a psychoanalytic drama that revolves around the narrative of split personalities. His work has been featured in several shows at Martos Gallery and Lomex in New York.

Swiss artist Tobias Spichtig’s work oscillates between music performances, writing and art. His work deals with issues such absence and presence, focusing the participation and the generosity of the audience and the support of a community. His performance work was featured at the Swiss Institute in New York, as well as the Hammer in Los Angeles.

Italian artist Davide Stucchi investigates history of objects and their relationship to our physicality. Through sculptures, installation and found items Stucchi, like a filmmaker, uses objects as words of internal and poetic narratives. He has recently had exhibitions at Taylor Macklin, In Zurich, Macro and MAXXI in Rome.
www.balicehertling.com