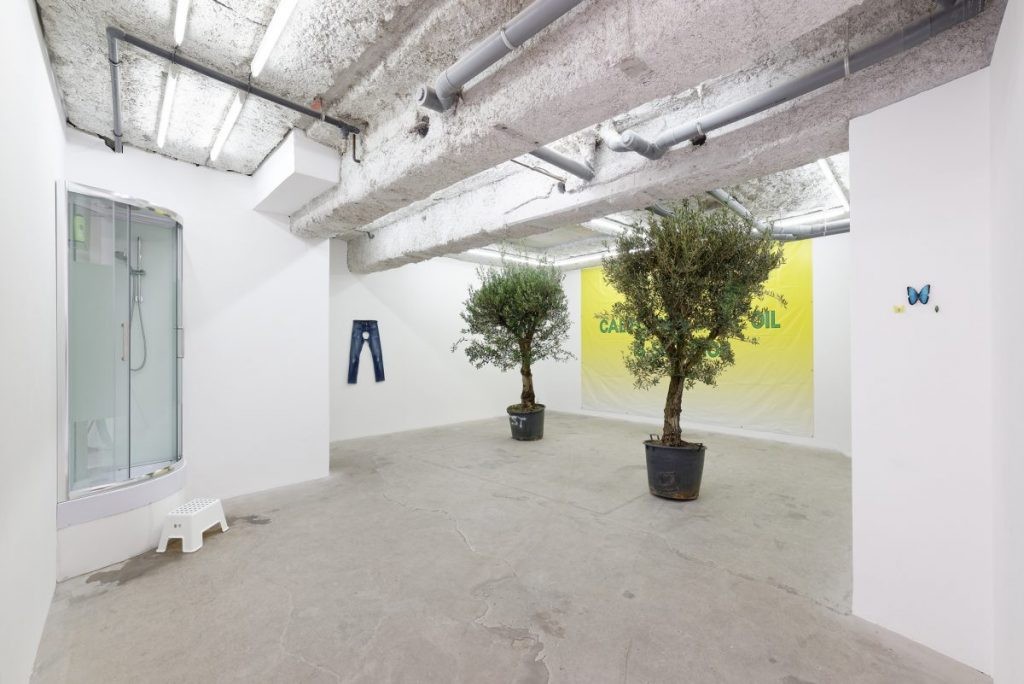 An exhibition in several parts:
Puppies Puppies with works by D’Ette Nogle and Ken Kagami
_

Puppies Puppies with Will Benedict
_

Puppies Puppies with works by Marie Angeletti and Will Benedict

I wrote a text for this exhibition on a plane from Los Angeles to Vienna. It took hours to write, but even before I was finished getting it all down I knew it wouldn't be published. There is a way of reading this configuration of works that is too bleak and too distorted to be attached to them, even with a voice as unofficial and compromised as mine. I wrote about the torture of cows, anonymous sex and the difficulty of adults trusting each other completely. After spending a few days in Paris thinking about the works that Puppies Puppies has chosen to exhibit at Balice Hertling, I've changed my mind.

Instead of writing on the plane to Paris, Puppies watched a documentary about Peggy Guggenheim. The highlight was the description of an exhibition she produced called Children which featured the work of unusually young artists. Puppies found this an exceptionally compelling precedent. We even started volleying additions to a tentative list for a re-staging on the train from the airport, and were surprised to find that we know a number of interesting child artists. If you look around this exhibition, you'll even find a little abstract painting, made by a young fox-artist named Juniper, who could be a candidate for a new Children. Juniper looks quite a lot like our dog, Spider-Man. This exhibition is a picture of the archetypal sort that a child makes. Their narrow world is represented as a set of discrete objects scattered across a plane. To understand the perspective of the child, you should parse the objects as symbols of key elements in the child's life, and then qualitatively evaluate them in order to get a sense of how they feel about those elements. Children tend to make pictures of their families and think about them in very direct terms.

The shower, installed in the gallery is available to anyone who would like to use it, would be a simply drawn house, an icon of protection. Especially as a child, but even still, Puppies retreats to the shower as a protective place. In the multiple explanations I've heard, this protection is always likened to a comforting rain. D'Ette Nogle, who happens to be a beacon of exceptionally warm human kindness, has provided with her work a gleaming sun to hang optimistically over the other symbols. Her banner is the California sun, which combined with a source of ample water yields a better olive oil. (This exhibition celebrates exactly a year that Puppies Puppies and I have lived together in California, which feels like the first real home city either of us have ever had.) Olive oil is, of course, made by olive trees, two of which stand in the middle of the exhibition. These are, inevitably, our two figures, recently married, the pillars of the depicted family. The sun, a shelter, a dog, the artist, and me.

Outside the frame, a periphery of other objects contextualize this image. Most prominently, a plastic heart is literally open, revealing its interior. This object belonged to and stands in for the artist's mother, a doctor who operates on hearts and lungs. Puppies Puppies was a child when she was completing her time as a medical student, and while the heart was an anatomical model she used to study it was also an especially coveted toy. It became a kind of private heirloom between them— mother and child both treasured the object, and it brought them subtly closer to each other. She was never ready to give it away until a few weeks ago. I'm not sure what changed recently, but we were completely surprised when she agreed to part with it.

Another important example is Ken Kagami's Jeans. Like so much of his work, Jeans has its brief first life as a piece of concrete comedy. We can't help but complete the picture, filling the hole in the pants with the genitals of a flasher. It lives again, as is so often the case with Kagami, to subvert: first the seriousness of the field of art, resurrecting the original mischief of the readymade, and then his own history as a celebrated fashion stylist in Japan. But there is a slower life that follows the first two, at least for me. I understand this work to be an image of vulnerability, the negation of a clothing-shield that in most societies protects a boundary between one's most private aspects and exposure to the public. This isn't only an interpretation for me, but also something felt. The longer I look at the object, the more grave it appears.

Somewhere even further outside of the frame, a swarm of fixtures hold ready miles of toilet paper, anticipating nervously a parade of feces and thus standing guard over a group of paintings by Will Benedict. Over the last few days, and even as I write this, I've remembered that originating art echoes defecating, which echoes giving birth. I think Puppies Puppies is beginning to consider adopting a child.
- Forrest

Puppies Puppies with Will Benedict July 7 through October 8

Puppies Puppies asked me to design a few paintings, which he could frame within walls of toilet paper rolls. So I made a couple paintings of a horizon within a horizon and I redrew a drawing by Dan Bachardy of Christopher Isherwood on his deathbed.
– Will

In 2014, a woman found ikea bags filled with human bones in the basement of a Swedish church. Since then, Puppies Puppies has hoped to remake this situation as an artwork. While visiting the studio of Cédric Rivrain and admiring his collection of artifacts related to human anatomy, Puppies Puppies learned that Rivrain possesses a partial human skeleton inherited from his father. For the second consecutive exhibition at Balice Hertling, Puppies Puppies invited Rivrain to exhibit these remains inside of an ikea bag used in Puppies Puppies' home for several years. Combinations of blue and yellow indicate this work is part of Puppies Puppies' Green Works, which relate to love and the artist's family. Puppies Puppies considers the resulting work, Human Bones in Ikea Bag (blue) (yellow) (green), 2016, to be a collaboration with Rivrain, whose work often focuses on representing aspects of the human form.
- Forrest

The Statue of Liberty was gifted to the United States of America from the people of France on October 28th 1886. Designed by Frédéric Auguste Bartholdi and built by Gustave Eiffel, the colossal sculpture became a symbol of hope to millions of immigrants.

Two months ago, Puppies Puppies dressed as the Statue of Liberty stood in front of Balice Hertling on the occasion of his first exhibition at the gallery. Two months later and for his second installment at the gallery, Puppies Puppies will present Marie Angeletti’s intimate video portrait “Statue of Liberty” (2015) and Will Benedict’s “I AM A PROBLEM” (2016) in which an alien discusses the importance of the Eiffel Tower amongst other issues and finally his own video “Sauron (Bataille Solar Anus)” (2016).
- Will
www.balicehertling.com