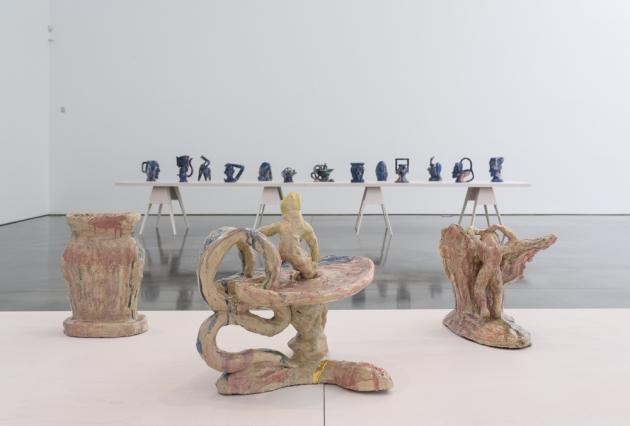 Installation view
ANDREW LORD
at sunset, with snow falling, by starlight
1 - 30 May 2015

Gladstone Gallery is pleased to announce at sunset, with snow falling, by starlight, an exhibition of sculptures by British artist Andrew Lord. The exhibition will feature three large-scale assemblages composed of cups, bowls, pots, and urns after Gauguin’s ceramics and drawings. At sunset is the last piece the artist built in his New York studio where he worked for 23 years. Lord transported the unfinished work to New Mexico and painted the surface at sunset, arriving at a luminous glaze evocative of the dramatic light of Carson mesa. The artist approached this process intent to consider how the ideas he formed in the early 1970s have transformed over time–ideas about Impressionism, Cubism, gesture, the body, light, shade, and memory.

Lord reinterprets Gauguin’s forms as vessels for exploring the light on the Carson mesa plain in New Mexico; the titling of Lord’s three pieces invokes both Gauguin and the site of production, bringing forth sources of both material and poetic inspiration. The artist’s recasting of Gauguin’s forms magnifies the scale of the original figures and provides fertile ground for interpreting the natural landscape.

In an artist statement Lord describes the trajectory of his art making and relationship to Gauguin’s forms as follows: In the ceramics I made from the 1970s onwards, painting objects at different times of the day, observing them in different types of light or no light at all, I was trying to grasp a narrative I’d seen in Gauguin’s ceramics. By placing objects together, assembling single works into groups of thirty or more, I wanted to present an idea as big as a painting, a view of the world as big as Monet’s Soleil couchant.