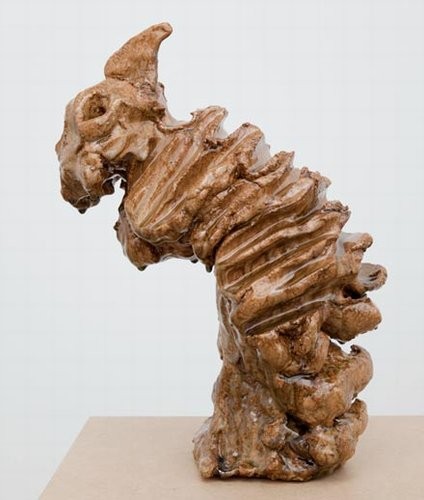 Gladstone Gallery is pleased to present the first solo New York gallery exhibition by Cameron Jamie. Jamie works in various media including drawing, sculpture, film and performance, often using found materials and footage or commissioned collaborations as a method to track the accretion of the surreal in everyday life. Locating much of his work within a matrix of fringe culture or bizarre happenings, he turns a canny yet aesthetic eye on ritual and practice to open up symbolic structures to re-appropriation and the possibilities of transferred meanings. Simultaneously an outsider and an insider, Jamie's work pushes the index of cultural totems to a hallucinatory pitch.

For this exhibition, Jamie will present a work entitled Smiling Disease, an installation comprised of drawing and sculpture exhibiting his fascination with the notion of masks as a form of portraiture. Beginning with a series of works on paper created through a process of layering ink, Jamie’s singular line reveals inchoate figures and hallucinatory anatomy. It is from these beginnings that characters represented by the masks emerge. The carving style and technique are loosely based upon a ritualized Alpine tradition of ornate wooden masks called Perchten; however, Jamie uses the craft as a conduit to embody the grotesque faces and figures—with features such as horns, scraggly beards, and misshapen mouths and teeth—that have long populated his work. Just as in his earlier pieces when Jamie explored the most far-a-field manifestations of such sub-cultural phenomenon as the Spook Houses in Detroit and backyard wrestling of his native San Fernando Valley, he is not merely dissecting fringe cultures under an anthropological gaze. Rather, Jamie dismantles and then reassembles both arcane and well-known forms and scenarios to create a new aesthetic experience. With this installation, he reinforces the notion of masks as a generative source for identity as created through the heterogeneous layering of form and practice.

Cameron Jamie was born in Los Angeles, California in 1969 and lives and works in Paris, France. Jamie’s first U.S. solo museum exhibition was held in 2006 at Walker Art Center, Minneapolis which traveled to MIT List Visual Arts Center (2007). He has shown his works at major contemporary art venues and at film festivals including the Whitney Biennial (2006) and the Venice Biennale (2005). His work has been included in a number of group exhibitions, including Legitimate Theater, Los Angeles County Museum of Art, Los Angeles (2001); Try This On, Yerba Buena Center for the Arts, San Francisco, California (2001); and Let's Entertain/Au-dela du spectacle at the Centre Georges Pompidou, Paris, France (2000-2001). In 2008 Jamie was the first recipient of the Yang Hyan Art Prize. This summer his work will be included in the Berlin Biennial.
www.gladstonegallery.com