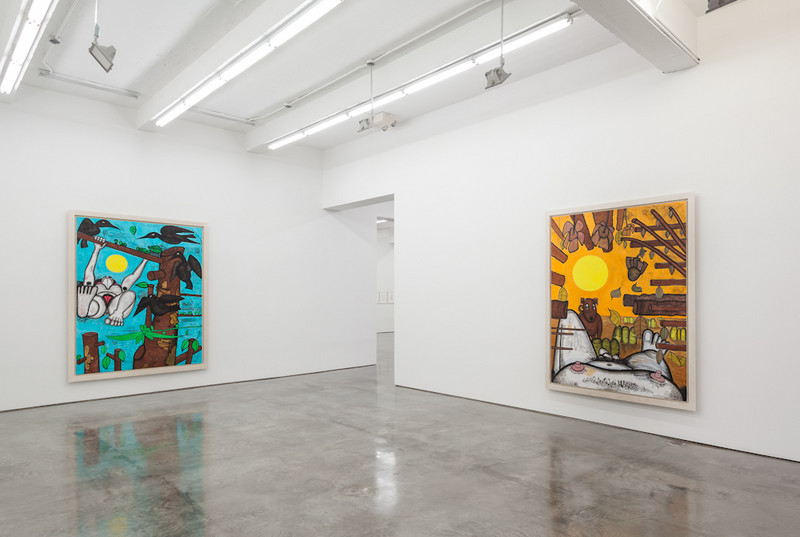 Gladstone Gallery is pleased to announce an exhibition of new paintings and drawings by Carroll Dunham. The exhibition features nine large-scale paintings drawing on the nude bathers and pastoral landscapes familiar from Dunham’s works since the late 2000s. The new paintings show the evolution of the artist’s bathers, while making room for new subjects to enter the frame and complicate the visual terrain, including animals and a nude male figure introduced here in paintings for the first time.

Dunham’s females are boldly animated figures, swinging from a tree or riding with extended arms atop a horse. The artist’s figures are both in and of their surroundings, composed of recurring motifs that are at once subject matter and formal devices. In Horse and Rider (My X) (2013-2015), the artist makes faintly visible the compositional elements of the painting: the structural device of an X, generated by two corner-to-corner lines, aligns the figure with both the landscape and the surface structure, as the nude rider’s arms extend out and upwards, legs resting over her horse’s rear towards the painting’s lower corners. The eye quickly finds the focal point of the X: Dunham directs our gaze purposefully and unabashedly towards the horse and female’s naked buttocks. Viewers are invited to enter the painting at this point, with an erotic and comedic twist to the pastoral image before them.

Throughout his career, Dunham has developed images that would become paintings through drawing. For the first time, this exhibition will show a suite of such studies, for Horse and Rider (My X), alongside the painting. Arranged chronologically, the graphite drawings reveal the evolution of Dunham’s motifs and compositions over a period of two years. In addition to elucidating the development of the painting, the works demonstrate the strength and range of Dunham’s drawing practice.

Pushing color, form, and line to create collision-like interactions of exuberant geometries, Dunham constructs a compact tension between the interlocking forms that relate to both subject and landscape, foreground and background. Vivid frictions are particularly felt in three yellow and black paintings titled Big Bang, in which the artist depicts the infinite vastness of the Big Bang. In an attempt to render the impossible, the paintings become part cosmological fantasy, while still rooted in the conventions and scale of a natural landscape.

The exhibition will be accompanied by a forthcoming catalogue, featuring an essay by Lynne Tillman.

Carroll Dunham was born in 1949 and lives and works in New York and Connecticut. Dunham’s work has been the subject of numerous solo exhibitions at international institutions including Museum Ludwig, Cologne; Millesgården, Stockholm; Drammens Museum, Drammen, Norway; a mid-career retrospective was held at the New Museum of Contemporary Art, New York. Dunham has also been included in notable group exhibitions including multiple Whitney Biennials and SITE Santa Fe; and at institutions including Musée d’art moderne et contemporain, Geneva; the Museum of Modern Art, New York; Museu Picasso, Barcelona; The Institute of Contemporary Art, Boston.
www.gladstonegallery.com