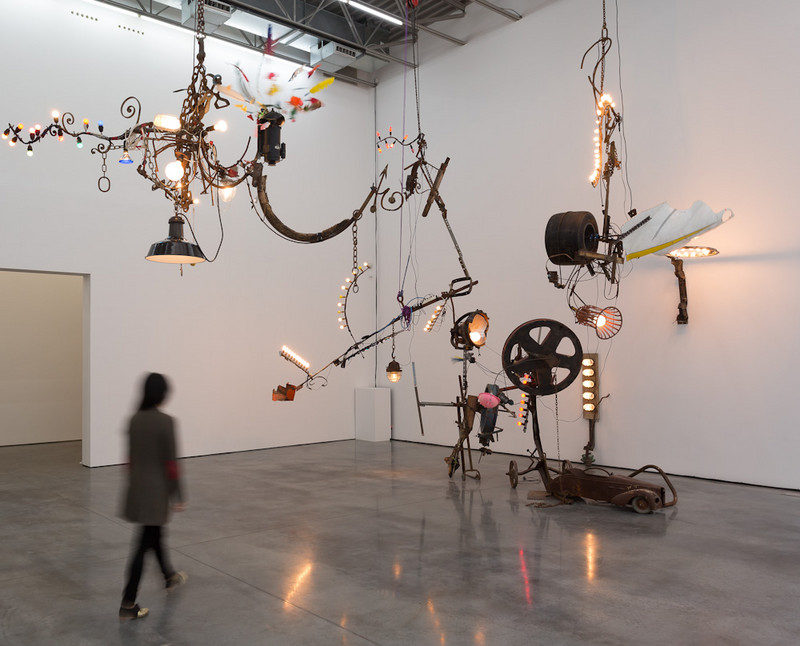 Gladstone Gallery is pleased to announce an exhibition of works by Jean Tinguely. This exhibition will include works by the artist from 1954 through 1991. Salvaged pieces of iron and wheels collected from junkyards provided abstract shapes for the artist. Using these “forms” and incorporating other found objects, Tinguely welded and assembled sculptures, creating a new function with the byproducts of consumption. He installed old motors, often decommissioned from 78rpm phonographs, onto his sculptures to produce unpredictable and non-repeating motion. Within these dynamic sculptures of chance, accident, and inconsistency, Tinguely’s sculptures often entertain or agitate the audience with their humor and irony. Tinguely is perhaps best known in New York for his monumental self-destroying sculpture Homage to New York, presented for only one evening in March of 1960 in the sculpture garden at MoMA.

The earliest work on view in the show will be Tinguely’s Meta-Malevich relief from 1954, whose title references constructivist compositions. A hidden pulley and rubber band system behind the pictorial plane moves white geometric shapes in front of the black background in non-repeating arrangements. Also on view will be a large group of his motorized sculptures, including Scooter (1960), a scooter with only one wheel rotated by a motor concealed within its helmet; Raichle Nr.1 (1974), a pair of the Swiss-branded ski boots topped with shears snipping at the air; and Trüffelsau (1984), the skull of a boar brought to life with its jaw chomping while its driftwood tail rotates slowly. Several of Tinguely’s lamps will also be installed, including L’Odalisque (1989), a 6-part sculpture with light fixtures and moving components.

Jean Tinguely (1925-1991) was born in Fribourg, Switzerland. While Tinguely worked primarily in France and Switzerland, he produced several works and completed commissions throughout Europe, United States, and Japan. His work has been presented at numerous international institutions including the Museum of Modern Art, New York; Centre Georges Pompidou, Paris; Stedelijk Museum, Amsterdam; Moderna Museet, Stockholm; Louisiana Museum, Humlebaek; Institute of Contemporary Art, London; and Museum Haus Lange, Krefeld. Retrospectives have been presented by Centre National d’Art Contemporain, Paris (1971); Wilhelm Lehmbruck-Museum, Duisburg (1978); Zurich Kunsthaus (1982); and Palazzo Grassi, Venice (1987). His work has also been included in major historical exhibitions including “Bewogen Beweging” (“Art in Motion”) at Stedelijk Museum, Amsterdam (1961); São Paulo Biennale (1965); “The Machine” at MoMA (1968); and “Paris-Paris” at Centre Georges Pompidou, Paris (1980). In October of 2016, an exhibition of sculptures including Tinguely’s “meta-matic” drawing machines will be on view along with his graphic works and artist’s books at the Stedelijk Museum in Amsterdam.
www.gladstonegallery.com