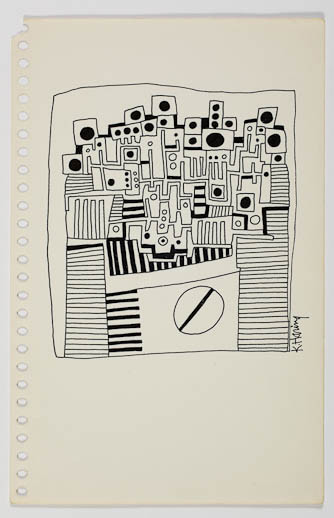 Gladstone Gallery is pleased to announce our first exhibition of works by Keith Haring. In 1982, Barbara Gladstone commissioned Haring to make a series of lithographs that were the first prints ever made by the artist, therefore it is with great pleasure that we present this exhibition. Long recognized as a leading figure in the energetic and innovative downtown culture of New York in the 1980s, this brilliantly inventive and prolific artist consistently forged new creative territories throughout his life and work that profoundly reflected his deep insight into the cultural zeitgeist of his day.

While Haring's animated contours and a pop-graffiti aesthetic are most closely associated with his signature iconography such as the radiant baby and barking dog, many of the underlying themes of his work were founded upon culturally subversive attitudes towards sexuality, gender, religion, and politics. Born in Reading, Pennsylvania, Haring arrived in New York in 1978 at the age of 19 when he enrolled in the School of Visual Arts. During this period, Haring began to establish a visual language that was centered upon dynamic mark-making techniques, compositional structures and, most importantly, the immediate primacy of the line, which would serve as the foundation of his artistic inspiration throughout his career. Influenced by an eclectic range of references including the work of Pierre Alechinsky, graffitied subway cars, comic book strips, and William Burroughs, the origins and development of Haring's work remained consistently rooted in his commitment to the irreducible principals of drawing.

Presenting never before seen works on paper, this exhibition focuses on the evolutionary period of Haring's early drawings, which traces the development of his formal language and elaborative visual vocabulary. Created in conjunction with a series of Bill T. Jones performances held in 1982 at The Kitchen, these three monumental works on view demonstrate the striking fluidity of Haring's bold graphics and his innate mastery of the optical possibilities of form and space. Executed in real time during Jones' dance performances—functioning as active set pieces with the sound of Haring’s brushstrokes serving as the only audio accompaniment —these works entrench the viewer in a field of interlocking geometries and spatial patterning, coalescing into an intimately constructed all-over effect. This exhibition will also present a selection of Haring's early sketchbook drawings, which capture the period when he was avidly exploring his artistic impulses and initiating the working processes through which the basic components of his practice and aesthetic sensibility would take shape. Haring's meticulously angular pen and ink compositions and loose, gestural graphite lines exemplify the opposing forces at play that would later become the enduring tenets of his work. Fusing the multiple strains of his early drawings, Haring generated a uniquely singular graphic vision that he pursued with unwavering conviction, dedication and spirit.

In 1990 Keith Haring died at the age of 31 of AIDS-related illnesses in New York. Since his death, his work has been the subject of several international retrospectives. His work is in major private and public collections, including, The Museum of Modern Art; The Whitney Museum of American Art; Los Angeles County Museum of Art; The Art Institute of Chicago; the Bass Museum, Miami; Centre Georges Pompidou, Paris; Ludwig Museum, Cologne; and Stedelijk Museum, Amsterdam. “Keith Haring: 1978-1982,” is currently on view at the Contemporary Art Center in Cincinnati through September 5, 2011 and was co-organized by Kunsthalle Wien.
www.gladstonegallery.com