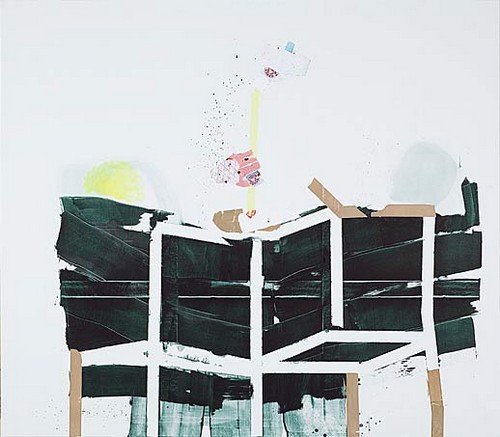 
Gladstone Gallery is pleased to announce an exhibition of new paintings by Magnus Plessen. Plessen constructs his compositions through defined brushstrokes, deliberate scrapes of paint, and a charged juxtaposition of positive and negative space. The imagery—landscapes, female figures, even soda bottles—that emerges from the lines, spaces, and colors seems both haphazardly collaged together and carefully installed, as if Plessen conjured the subject unconsciously through the act of painting.

In this new body of work, he strives to create work in which perspective and point of view do not remain fixed. Plessen’s continual spatial volley, as rendered through line and shape, not only destabilizes the figure/ground relationship but also dislocates the compulsion for narration. In the painting Spiel (Game), two disembodied figures tease the etymological overlap between playing a hand of cards and gambling with body parts. Any attempt to resuscitate the scene through ekphrasis begins and ends with the pile of seemingly collaged hands floating on the surface of the canvas. The enigmatic subject matter works in tandem with Plessen’s method to examine what the artist calls “the process of ‘unfinishing’ a painting.” It is within this liminal region that the viewer’s point of view can manifest in a multiplicity of vantages. For Plessen, vision becomes a form of touching, a method of discerning the world not through passive observation alone, but through interrelation. Through his paintings, Plessen insists upon a world whose visual order must be read as both fluid and tactile, in which vision is continually reconstructed through both eyes and hands.

Magnus Plessen was born in 1967 in Hamburg, Germany. His paintings have been the subject of numerous solo exhibitions, at various venues including the Neues Kunstmuseum in Luzern, K21 Kunstsammlung Nordrhein-Westfalen in Düsseldorf, P.S. 1 in New York, the Centre Pompidou in Paris, and the Art Institute of Chicago. His work was also included in the fiftieth Venice Biennale in 2003. This fall Dumont will publish Die Augen en der Hand (The Eyes in my Hand) a new monograph of his complete paintings.
www.gladstonegallery.com