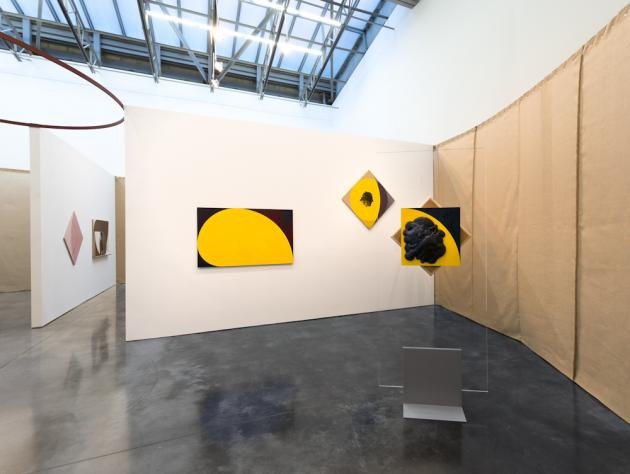 Gladstone Gallery is pleased to present O Tópico, Chapter 27, an exhibition of new work by R. H. Quaytman. Since 2001, Quaytman has made her work using a systematic, overarching approach that conceptually resembles a book, in which each successive exhibition is a chapter. O Tópico, Chapter 27 was initiated in 2012 after the artist was invited to propose a permanent installation of paintings for Inhotim, a vast Brazilian botanical garden and art park located in Minas Gerais. Work for the chapter began with two research trips to Brazil, during which Quaytman gathered source materials and took photographs that connected to both Brazil and the ongoing painting project.

Following the exhibition at Gladstone Gallery, the paintings will be permanently installed at Inhotim. They will be housed in a pavilion designed by architect Solveig Fernlund, who has been working with Quaytman on exhibition design since the late 1990s. The Gladstone installation, also designed by Fernlund, mimics the spatial orientation of the projected building. The overall shape of the pavilion is modeled on a Fibonacci sequence and the golden spiral. These patterns are also present in the gesso on many of the O Tópico panels, which are themselves confined to eight nesting sizes based on the golden ratio. This base spiral pattern triggers self-generating correspondences between divergent paintings. A circuit of pictorial events is activated through rotation, scaling, and reflection. The paintings are all on plywood with beveled edges. This chapter marks the debut of encaustic, Polyurethane, and wood relief in Quaytman’s work.

The photographically-based silkscreen images in the works draw on a wide array of topics or subjects, as suggested by the chapter’s Portuguese title (which translates literally to “The Subject”). Some of these images are from Polaroids taken at Inhotim. In one example, an anonymous teenager poses in front of an old VW, part of an artwork by the Brazilian artist Jarbas Lopes called Troca-Troca (2002). Another artist referenced in the chapter is Dawn Kasper, shown here working on a drawing that says “chaos is a ...”. This particular painting continues a thread that runs through Quaytman’s chapters, wherein she features portraits of fellow artists and writers. Another reference is a seed the artist found on the ground during her travels there. The following is a statement from the artist:

“The ambition of this ongoing serialized system is to develop a living, usable painting model, that corresponds with how—not only what—we see. Through the unfolding itinerary of my chapters I outline an artist’s art history. Brazil, in this regard, has no match in intensity—and in its applicability to what I think about. The paintings were made while researching Lygia Clark, Mira Schendel, Hélio Oiticica, Clarice Lispector, Lina Bo Bardi, João Vilanova Artigas, Elizabeth Bishop, Paulo Freire and Claude Lévi-Strauss. But these paintings are not addressed to them or even a public that knows them. They address the public I encountered at Inhotim. A public made up of crowds of school kids and families with grandmothers and teens and toddlers. But how to address this public, from the already compromised viewpoint of a US citizen, and an artist who insists on the medium specificity of painting? I tried to make paintings for children, teens and adults. But it turned out I was not up to that task, and instead it became, despite my wish for order and clarity, a kind of cosmos—it became about the world and the problem of speaking a common language without pedagogy. This sentence by Hélio Oiticica helped me understand what my paintings appeared to be doing. It goes, ‘BRAZIL DIARRHEA, WHAT MATTERS: the creation of a language...’”

R. H. Quaytman has been the subject of solo exhibitions at numerous museums and institutions, including The Renaissance Society, Chicago; Kunsthalle Basel, Switzerland; Neuberger Museum of Art, Purchase, NY; San Francisco Museum of Modern Art; and The Institute of Contemporary Art, Boston. Quaytman’s work has been included in group exhibitions at The Museum of Modern Art, New York; The Whitney Museum of American Art, New York; The Guggenheim, New York; CCS Bard Hessel Museum of Art, Annandale-on-Hudson, NY; Sculpture Center, Long Island City, NY; MoMA PS1, Long Island City, NY; and Bergen Kunsthall, Norway. Quaytman was included in the 54th Venice Biennale in 2011 and the Whitney Biennial in 2010. The artist currently lives and works in New York. The next chapter will be held at The Tel Aviv Museum of Art in June 2015 and will be curated by Mark Godfrey.
www.gladstonegallery.com