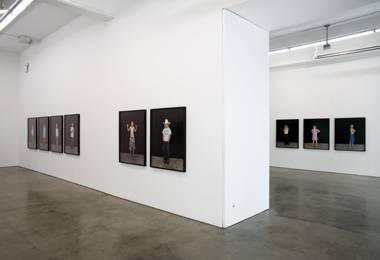 Gladstone Gallery is pleased to present a new body of work by Sharon Lockhart. Pine Flat continues Lockhart’s exploration of the formal aspects of film and photography and their interrelation. Set in the backdrop of a rural village in California’s Sierra Nevada Mountains, the feature-length film and large-scale portraits focus on the community’s youth and the experience of American childhood.

The 16mm film Pine Flat emerged from Lockhart’s desire to create a vision of youth that is more intimate, yet unspoiled by sentiment. Working without a camera crew, she interacted directly with the children living amidst the picturesque landscapes surrounding the titular hamlet. Composed of twelve fixed camera filmic portraits, each segment lasts for ten-minutes, which is the length of one reel of 16mm film. In the first six, the children engage in various solitary activities, such as a teenage boy scouting the landscape with a rifle, while in the second, groups of children interact with one another, as in a sequence involving two sisters’ banter over a tree swing. With minimal direction, she was able to witness the interior vistas of a child’s coming of age. For the gallery presentation, Lockhart has formatted the film installation as a double projection, screening two segments on a daily rotation, allowing the arc of the film to unfold over a period of six days. Walker Art Center director Kathy Halbreich notes of these nearly static sequences: “In many ways these images suggest a truth that weighs heavily on a responsible adult: a child’s idea of life is a fiction—a futuristic imagining based on bits and pieces of parental or societal stories.” These stories, though, eschew narrative in favor, perhaps, of capturing Lockhart’s own hopes of recovering something lost that she sees beginning to slip through the fingers of her subjects.

For the series of nineteen portrait photographs of Pine Flat’s youth, Lockhart set up a traditional studio in a nearby barn, where the children could sit in the historic method. The views remain consistent in each work: a plain black background meets a no-frills cement floor in room lit only by the natural light that filtered in from the open doors. In this theatrical setting, the children develop a different kind of relationship to the camera in presenting themselves as they wish to appear. In each, Lockhart arranges the proportions so that each child fills the entire plane, despite age or size, creating an egalitarian view of the community of children.

Pine Flat opens at the Walker Art Center in Minneapolis on April 22, and will be shown at Harvard University’s Arthur M. Sackler Museum and the Museo do Chiado in Lisbon in the fall of 2006. A full color-catalogue with texts by Halbreich, Linda Norden, and Frances Stark will be published by Edizione Charta on the occasion of these exhibitions.

A special screening of Pine Flat will be held on Thursday, May 25, at Lincoln Center in New York.