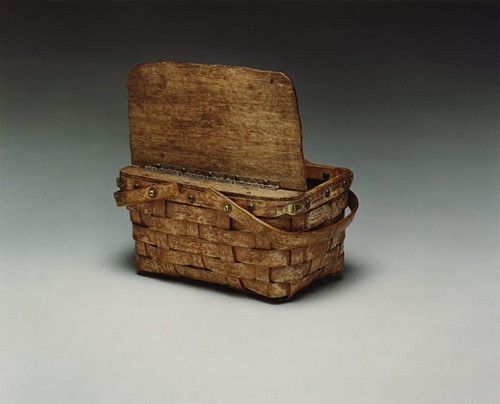 Gladstone Gallery is pleased to present a new body of work by Sharon Lockhart. Known for her structural explorations of the ontological boundaries of still and moving images, Lockhart creates photographs and films that at once mine the formal terrain of film and photography while presenting a thoughtful meditation upon her chosen subject. Additionally, Lockhart’s methodology requires a close involvement with the communities she depicts, resulting in works that are not only formally acute, but also sociologically insightful. For this new body of work, she has turned her focus toward the workers of Bath Ironworks in Bath, Maine, to consider both the plastic and psychological terrain bound up in structures of labor.

In the installation Lunch Break, designed in collaboration with architects Escher Gunewardena, a single tracking shot slowly slides down a locker-filled corridor where the ironworkers eat their lunch. A lyrical evocation of the nexus between the industrial and social, the untethered camera allows for the audience to experience this brief moment of the work-day as a sustained vision and witness the various activities and methods of self-expression that emerge out of it. The soundtrack, designed in collaboration with composer Becky Allen and filmmaker James Benning, weaves the diegetic tones created by worker’s voices with industrial sounds and music. In a series of accompanying photographs, Lockhart depicts the workers interacting through both institutionalized and makeshift relations and rituals encompassing spatial, historical, and economic dynamics. This includes a series of independent business run by the ironworkers catering to their coworkers. Finally eighteen more formalized still-lives of the workers’ lunch boxes serve as portraits of their owners—in each case, the worker is both framed by and frames the work place.

Sharon Lockhart lives and works in Los Angeles and has had solo exhibitions at international venues including Wiener Secession, Austria; Walker Art Center, Minneapolis; Fogg Art Museum at Harvard University, Cambridge; Sala Rekalde, Bilbao, Spain; Museum Boijmans Van Beuningen Rotterdam; Kunsthalle Zürich; Museum of Contemporary Art, Chicago; Wolfsburg Museum, Germany, and MAK-Austrian Museum of Applied Arts, Vienna. Her films have been included in the New York Film Festival, Vienna International Film Festival, Berlin Film Festival, and the Sundance Film Festival, where Lunch Break and Exit were selected in 2009. The Lunch Break exhibition debuted at the Wiener Secession in November, 2008 and will be exhibited at Mildred Lane Kemper Art Museum, Saint Louis, MO in February 2010 and will travel to the Colby Art Museum, ME in July of 2010. The exhibitions will be accompanied by fully illustrated catalogue, which will be released in February 2010.
www.gladstonegallery.com