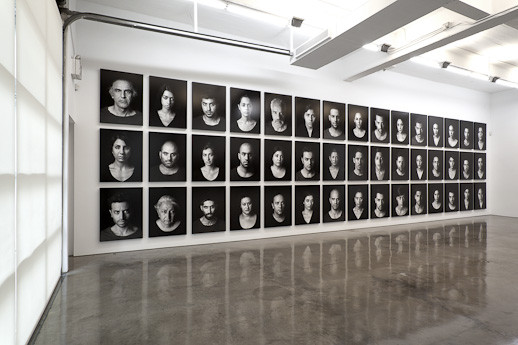 Gladstone Gallery is pleased to announce our fifth exhibition with Shirin Neshat. In her upcoming project, Neshat will present a new series of photographs and a video installation, both of which explore the underlying conditions of power within socio-cultural structures. Inspired by the sweeping momentum of recent political uprisings in the Arab world, Neshat turned to both historical and contemporary sources to generate richly provocative metaphors for the network of relations that comprise a society.

The new photographic series, titled The Book of Kings, is named after the ancient book Shahnameh (The Book of Kings), a long poem of epic tragedies written by the Persian poet Ferdowsi between c. 977 and 1010 AD. Shahnameh retells the mythical and historical past of Greater Iran from the creation of the world until the Islamic conquest of Persia in the 7th Century. Divided into three groups—the Masses, the Patriots, and the Villains—Neshat’s portraits of Iranian and Arab youth comprise black and white photographs with meticulously executed calligraphic texts and drawings inscribed over each subject’s face and body. These texts and illustrations—drawn from Shahnameh as well as from contemporary poetry by Iranian writers and prisoners—both obscure and illuminate the subjects’ facial expressions and emotive intensity, intimately linking the current energy of contemporary Iran with its mythical and historical past. In this arresting body of work, Neshat returns to the confrontational nature of her iconic Women of Allah series, while re-focusing on themes of revolution and the bold-faced defiance of youth.

In her new three-channel video installation, Neshat draws upon themes of justice and the struggle of the artist against the constraints of authoritarian rule. Creating a space where moral judgment is questioned and the viewer’s allegiances oscillate between identifying with the victim and being accomplice to power, Neshat investigates the repressed and unspoken elements of social and cultural consensus through this bold new work.

Shirin Neshat was born in Qazvin, Iran and moved to the United States in 1974. She has had solo exhibitions at the Museo de Arte Moderno, Mexico City; Contemporary Arts Museum, Houston; Walker Art Center, Minneapolis; Castello di Rivoli, Turin; Wexner Center for the Arts, Columbus; the Art Institute of Chicago; the Serpentine Gallery, London; Museo de Arte Contemporaneo, León, Spain, and the the Hamburger Bahnhof, Berlin. Neshat was included in Prospect.1, the 2008 New Orleans Biennial, Documenta XI, the 2000 Whitney Biennial, and the 1999 Venice Biennale. Neshat was awarded the Silver Lion at the 66th International Venice Film Festival (2009), the Lillian Gish Prize (2006), the Hiroshima Freedom Prize (2005), and the First International Award at the 48th Venice Biennale (1999). OverRuled, Neshat’s commission for the fourth edition of Performa, premiered in November 2011. A major retrospective of Neshat’s work, organized by the Detroit Institute of Arts, will open in April 2013. Neshat currently lives and works in New York City.
www.gladstonegallery.com