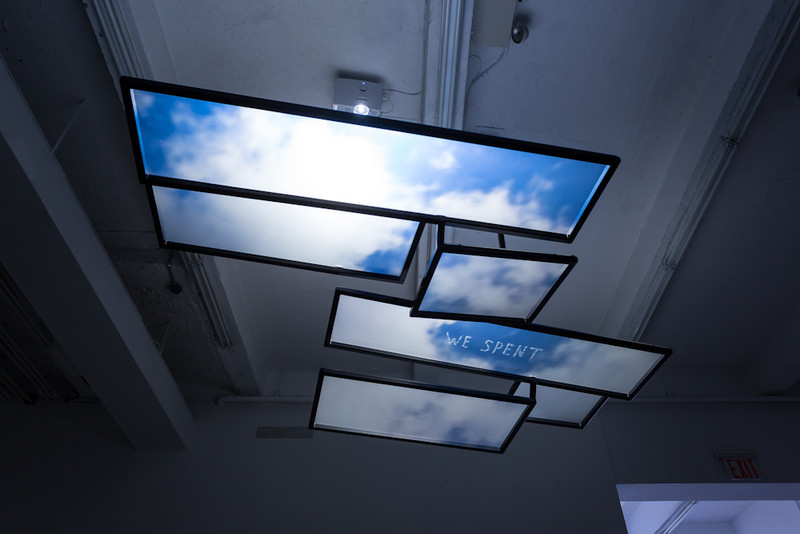 Gladstone Gallery is pleased to announce the gallery’s first exhibition with T. J. Wilcox. The show will present new film installations and lenticular photographic lightboxes, exploring the movement and mutation of cloudscapes as compelling abstracted narratives.

In this installation, Wilcox leads viewers to look upward to the ceiling, an often-overlooked surface within the gallery space. Suggestive of the natural world beyond the enclosed built environment and beyond human stature, the assembled projections offer a view of the extraordinary, unpredictable, and the everyday experience of gazing upward at the sky. The artist has produced sculptures that hang from the ceiling at a single point, comprising an arrangement of steel, Plexiglas and projected video. These hanging sculptures suspend in balance a group of projection screens arranged to float overhead like a cluster of abstracted clouds. The screens are made of a new material that allows rear-projected video to brightly appear in high resolution in any light condition. Wilcox’s structures engender awe for the enormity and phenomena of the natural world that often goes unnoticed; non-linear narratives concerning the act of looking upward interspersed in the films additionally offer further reflection on the world above our heads.

The exhibition will also feature the artist’s film of the sky as five lightboxes. Through lenticular printing, the act of animation is made physical as viewers perceive shifting clouds through phenomenological experience. In Wilcox’s lightboxes and films, the expansive world is distilled without being simplified; what is too large to comprehend is put forth as an opportunity to imagine the atemporal and mythological world around us.