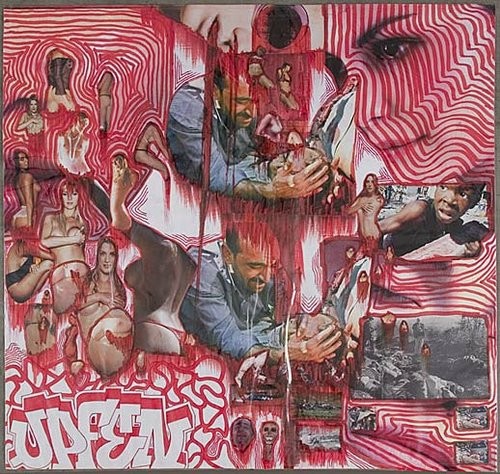 Gladstone Gallery is pleased to announce a new work by Thomas Hirschhorn. Known for sprawling works that transform traditional white cube spaces into absorbing environments tackling issues of critical theory, global politics, and consumerism, Hirschhorn engages the viewer through superabundance. Combining found imagery and texts, bound up in low-tech constructions of cardboard, foil, and packing tape, he props imagistic assaults in a DIY-fashion that correlates to the intellectual scavenging and sensory overload designed to simulate our own process of grappling with the excess of information in daily life.
For this exhibition, Hirschhorn will convert the gallery space into a universal gym, recasting fitness equipment and anatomical models into an apparatus of social critique. While classical in origin, the gymnasium has become a quasi-pedagogical space for modern man and a primary site of interaction, though whether the action of the gym is social or merely narcissistic becomes the pivot upon which Hirschhorn makes his case. The construction of one’s self as human, in his or her physical fitness, determines communal notions of desire and longevity, and yet the preponderance of physical expenditure and surplus, of discipline and logic, foreshortens perspective to the point where maintaining standardized positions precludes critical inquiry. As the artist writes of the work, “Universal Gym is a space for exhaustion, for hanging on, for staying upright, and staying in shape while the world falls apart.” In many ways the Universal Gym becomes somewhat comic, a ship of perfected fools sailing blindly through the storm.
Thomas Hirschhorn was born in 1957 in Bern, Switzerland, and now lives and works in Paris. His work has been the subject of numerous solo exhibitions including the Institute of Contemporary Art, Boston; Centre Georges Pompidou, Paris; Museu d'Art Contemporani, Barcelona; Kunsthaus Zürich; Art Institute of Chicago; and Museum Ludwig, Cologne; and Secession, Vienna. In 2003 he founded the Musée Précaire Albinet, a temporary art and community space in Aubervilliers, France. Additionally, he has taken part in many international group exhibitions, including Documenta 11 in Kassel, Germany, where his large-scale public work, Bataille Monument, was on view; “Heart of Darkness” at the Walker Art Center; and recently “Life on Mars: the 55th Carnegie International.” Hirschhorn was the recipient of the Prix Marcel Duchamp in 2000 and the Joseph Beuys-Preis in 2004.
www.gladstonegallery.com