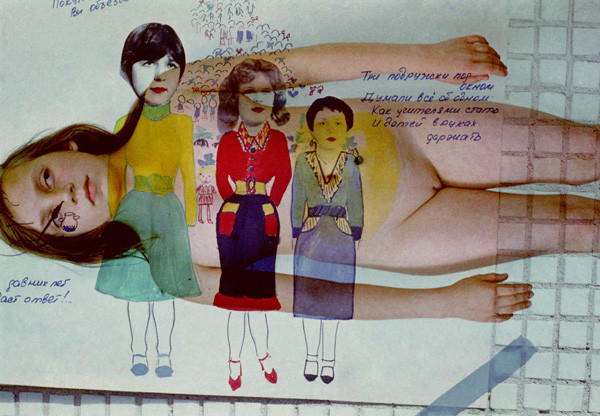 Boris Mikhailov is one of the most important photographers of our time. In 2000 he received the Hasselblad Award, the international prize for contemporary photography. This year he is representing Ukraine at the Venice Biennial.

Since the 1960s he has been developing a visual cosmos in which the lives of simple people in Communist Russia are penetratingly recounted. In those days, photography was controlled by strict rules. Mikhailov turned against these rules and pointed his camera in the direction of the private and the personal, the lives of his friends and acquaintances, sexuality, and the creeping decay of his home town, Kharkov.

Almost four decades after its creation, we are presenting an exhibition of the Sandwich series. Created during the late nineteen-sixties and seventies, this series represents the poetic side of Mikahilov’s early conceptual work.

Overlapping motifs lead to multifaceted interpretations, in which ironic allusion to food shortages, gloomy living situations, or the desire for an automobile are as disguised as the taboo presentations of nudity and sexuality. He not only illustrates people’s lives, but also reflects the state of society. The montage of images of opposing meanings not only reveals the artist’s own divided split identity, but also the contradictions and ambivalences in Russia in general. The layering of numerous motifs featuring shots of surfaces that have been exploded or are crumbling is symptomatic for the collapse of Soviet society.

In Sandwich, Mikhailov does not limit himself to presenting decay. He blends individual motifs of idyllic landscapes or beautiful women, achieving ironic or humorous situations through these combinations. The layering creates a kind of color that is draped over the pictures like a nostalgic veil. In this way, the tragedy and coldness of the visuals are first revealed upon closer inspection.

Sandwich combines what Mikhailov regards as two fundamental elements of Russian society: beauty and suffering. He shows real life, the restrictive relationships and sacrifices, but most especially, the beauty of Russia, the wealth of dreams and fantasies that cannot be controlled.