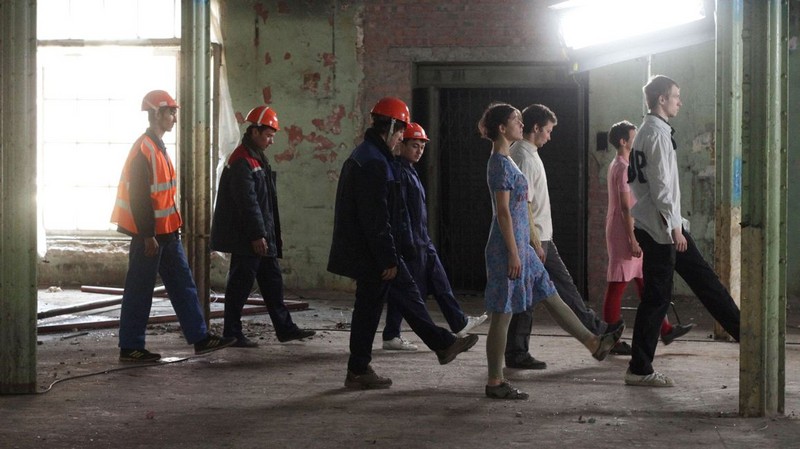 The exhibition Female Views on Russia gathers documentary, narrative, and performance-based videos by the Russian-born artists Taisiya Krugovykh, Anna Jemolaewa, and Gluklya. All three artists consider themselves feminists, and in their works they confront gender roles, repression and resistance, migration, and interpersonal relationships. The works on display here deal with political and social aspects of Russia’s past and present. They employ humor, irreverence and empathy as contrasts to the culture of power, strength, and masculinity that has been reinvigorated in recent years.
Anna Jemolaewa’s films are precise observations distinguished by a feel for the absurd in reality and the universal in individual cases. Her video Kremlin Doppelganger (2009) seizes upon what is probably the most emblematic symbol of Russian state power: the Red Square in Moscow, where the retaking of Crimea was celebrated this past February, and national myths are conjured. In her film, Jemolaewa combines footage of the original Red Square in Moscow with everyday scenes from its detailed copy, the „Kremlin Palace Hotel“ vacation resort in Antalya, Turkey. Built in 2003, the resort with a cocktail bar, pool, and beach now enjoys great popularity among guests from the former Soviet Union in particular. Besides the vacationers, the film also features a Gorbachev double, hired by the hotel, who talks about his experiences and encounters. Thus, the film not only blends together places, but history and the present day, as well.
The video artist and activist Taisiya Krugovykh belongs to a young, political, and socially engaged generation of artists that uses the freedom of the Internet to create and distribute actions, and is thus part of an international network. She lives in Moscow and works in the circle revolving around the artist groups Voina and Pussy Riot. Her piece The Anthem (2014) conveys a physical sense of how it feels to be powerless in view of what is developing in her country. While a choir sings the Russian national anthem, the artist is on stage, enveloping her head in plastic wrap and adhesive tape. Eventually, she cuts off her breath and at the end, collapses lifelessly. In her film Moscow, I Love You (2010) the audience follows a doll on its way through Moscow on the subway, by car, and by ship. Accompanied by the melancholy sounds of Philip Glass, subtitles tell the doll’s story of her increasing depression and lethargy in the face of society’s coldness and the lack of human communication in the big city.
Gluklya’s aim is to overcome this chill through the means of art. She founded the collective Factory of Found Clothes with Ogla Egorova (Tsaplya) in 1995 and has been operating it in changing collaborations ever since. With her performative works, she creates encounters between people from different social groups. In her video project Wings of Migrants (2012) young Russian dancers and illegal guest workers from central Asia gather and approach each other carefully through the medium of dance. As they mirror each other’s movements, a dialogue is created that bridges the social and linguistic gaps between the ballerinas, who move in the spheres of high culture, and the migrants, who are pushed to the periphery of society. In The Triumph of Fragility (2002) young marines march through Saint Petersburg. The artists from Factory of Found Clothes have the soldiers carry delicate white dresses in front of them, as if they were something fragile, something “that constitutes the essence of life itself.” A task that the young men fulfill with great earnestness, creating a powerful, alternative image of the military as a place where masculinity is practiced and put to the test.
www.barbaragross.de