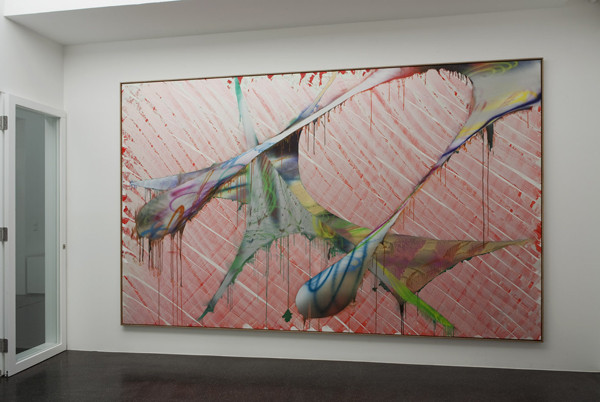 Our fourth exhibition features new canvases by Katharina Grosse. For the past two decades Grosse has consistently explored the possibilities of painting, expanding from the canvas into the surrounding space, painting and spraying on walls, floors, and ceilings. The context extends from inside to outside, and includes everyday objects such as furniture, books, and clothing, which she turns into carriers for her images. Grosse?s site-specific installations can reach monumental dimensions, challenging observers to take a variety of perspectives, and allowing them to experience painting in a time-space continuum.
Grosse's most recent canvases combine a complex artistic vocabulary. Patterns of diagonal hatchings and closely set strips of color cross with delicate, almost transparent lines to form the basic rhythm. At the edges of the paintings, the structures open up, providing a view on their ground. One type of shape that frequently appears in Grosse?s works is the ellipses, which she employs as a convex, vaulted sculpture or as an image. On the canvas, physical forces seem to affect its form. It can take on the soft appearance of a drop, apparently flowing vertically across the painting. Set in motion, it practically begins to swing, developing a palpable dynamic. With the help of ellipses-shaped stencils, individual areas are left open, while in other places, they overlap and permeate each other, becoming so dense that they seem to be imploding.
Like Grosse?s installations and three-dimensional works, these canvases cannot be comprehended in a single glance. Rather, multi-layered perspectives open up through the phenomenological experience. Different levels emerge and exist next to each other, parallel and equal, uniting to form a polyphonic, open-ended order. Hard corners cut through soft, dissolving contours; blurred, sprayed planes follow illusionistic, three-dimensional spaces. Different artistic principles coexist. The simultaneity of these structures and their open-ended processuality create an explosive force that blows away stalemated, causal notions.
A monograph about these recent canvases is being published in May by Distanz Verlag, Berlin: Katharina Grosse. Eat Child Eat, featuring a text by Ulrich Wilmes. Starting on May 25, 2011, the Kunstmuseum Bonn will be showing a large painting in an outdoor exhibition.