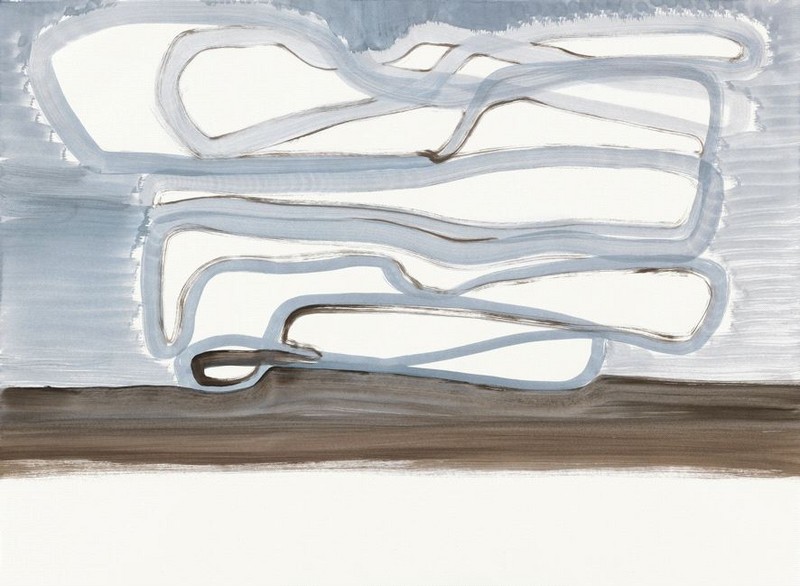 An observation, a memory, a vague idea is the beginning.
Form !nds itself along the way.
Line is the subject. It breathes, is !rst dark and wafts, becoming lighter, out of the white of the paper. It extends across the whole sheet, touching other lines, leaning against them, intersecting, dangles from the edge, runs around, takes in the margins, sweeps off the paper.

With these words Silvia Bächli succinctly describes the creation and realization of her drawings in 2014. Ever since her !rst exhibition at the Barbara Gross Galerie in 1988 her work has been under steady development. "Continually doing something different than before without abandoning the previous things, taking them all along and slowly continuing them”—this idea of the artist fuels her constantly changing visual formulations.

Bächli’s drawings are reactions to the phenomena she perceives in her immediate surroundings: things and landscapes, observations of movement and sound. Motifs like the outline of a female torso, the silhouette of a couple, or the depiction of a branch, are familiar from her earlier works. They hang between drawings that are less clearly !gurative. Freely drawn lines, soft and "owing, dynamically curved or precisely geometric, awaken recollections of landscapes, organic or architectonic structures.

Color is newly dominant. Where many different shades of black once constituted the richness of her drawings, Bächli now extends her palette with milky, matte and transparent hues as well as strong colors. Rhythmically layered lineaments are condensed into a surface. Bächli’s four-month stay in Iceland in 2008 has been described as her 'initial experience of color.' The white, snowy landscape with its contrasting colored details, such as a door painted bright blue, or a roof covered in green, is echoed in the ensuing works. Her !rst color drawings were added sporadically to her mainly black-and-white installation at the 2009 Venice Biennial. In our exhibition they are now the major element.

"Bächli’s mastery rests on her ability to alienate the conventional aspect of subjects by means of palette and shading so that something new emerges, something familiar and yet still foreign,” writes Michael Semff in the catalogue for her exhibition at the Graphische Sammlung Munich in 2014.