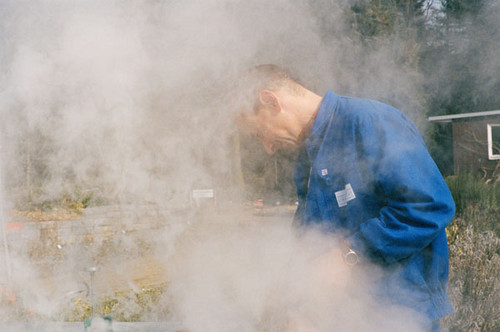 Tamara Grcic is known for her serial photo works and video projections. By concentrating on a motif and its consistent repetition in the series, she sharpens the perception of the eye for people, situations, colors, forms, and details. In our third solo show, Grcic’s photographic series, still, displays a new approach in her photography, in connection with an acoustic installation especially conceived for the gallery.

Still is Grcic’s first show to feature individual photographs of many different split-second moments. The point of view in this new series is broader; the images are more narrative. Scenes come from the periphery of the everyday. We see a gardener in the park, a girl reading at a table, a tiger in his enclosure, girls on the beach. Still lifes, such as a broom in the snow or a broken lamp on a wall, are visual triggers. Grcic presents us with incidental situations, with a view for details and contexts. They demand our deliberate attention, since it is only after prolonged observation that the attraction of the images, with their gentle tones and hidden moments, can be deciphered.

The thread running through the series is a voice, a sound, which loosely connects the individual photographs and turns them into a series, and which Grcic calls still. People are absorbed in their tasks; objects have not been used for a long time. The situations, people, animals, and things depicted are removed from the flow of movement in the real world. Like film stills, they are extracted from the inattentiveness of daily life. Time seems to stop, also in the filmic sense of still.

Sixteen photographs total comprise the series. For Grcic, they function like a building set, from which she takes individual photos and mounts them in sequence for the exhibition. The pictures enter into a relationship; the scenes combine to form stories, which, however, remain open-ended.

The artist developed an acoustic installation to accompany the photographs. In vases of different size, color, volume, and texture are concealed metronomes, which beat in different rhythms. The fragility of the vases, their delicate placement on the floor of the gallery, demands viewers’ attention and guides their movement through the space. Yet another frequency supplements the sound of the photographs.

Tamara Grcic, born in 1964 in Munich, lives and works in Frankfurt am Main. In 2006 she received the Günther Peil Foundation prize, which included a solo show at the Leopold Hoesch Museum in Düren. At the Kunstmuseum Bonn a group presentation is currently featuring Haare, New York City, 1997/2006 and Kleiderblock, 2006. During the summer of 2007 she will participate in the Triennale der Kleinplastik in Fellbach. An artist’s book, published by Revolver, will accompany the still series.
www.barbaragross.de