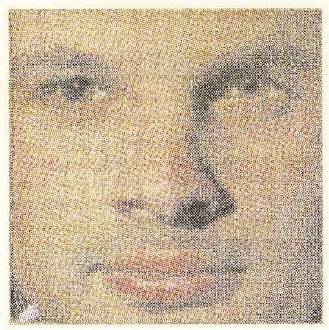 Our group show will feature works by artists whose themes deal with corporeality and surfaces in general, but most particularly with symbolic and social phenomena inscribed on the human body. The exhibition also focuses on the material skin in the artistic process — meaning the haptic and sensual qualities of surfaces and appearances. We will also show works by artists involved in thoughtful explorations of the painterly skin and critical analyses of the techniques and material of visual creation.

LOUISE BOURGEOIS (b. 1911, Paris, France) is probably one of the most famous sculptors of our time. Besides her sculptures, she has developed an extensive complex of drawings in which she works out her interests in form and motif. The pieces in the exhibition are impressive proof of how Bourgeois playfully transforms female body parts into biomorphic forms: for instance, the breasts added to grapes, which began appearing in her works as early as the 1950s, or the  spread legs of a woman’s body, which recall her spider sculptures.

KIKI SMITH (b.1954, Nuremberg, Germany) also became known in the late 1980s as a creator of radical body sculptures. One focus was on the anatomical dissection and fragmentation of the human body, which led to the depiction of the empty human shell, a latex skin. Smith also transposes her interest in sectioning the female body to her print works, one of which, Bosom Drawing, is featured in this exhibition. In it, Smith has created a collage consisting of several paper forms in the shape of female breasts. Crucial to the physical, haptic impression is the Thai paper, whose wrinkled surface resembles skin.

In her drawings, Swiss artist SILVIA BÄCHLI (b. 1956, Baden, Switzerland) also focuses on fragments of the body, reducing them to the simplest forms and lines to describe human physiognomy. Bächli prefers to work with gouache or ink on paper; her virtuosity is such that a few, long brushstrokes suffice to form a kind of fragile physicality. Surfaces are composed using highly refined washes of gray tones, which make the bodies seem more transparent and ephemeral.

In her large-format, expressively strong, colorful gouaches, Dutch painter CHARLOTTE  SCHLEIFFERT (b. 1967, Tilburg, Netherlands) explores the current social and political events of our time as they are conveyed in countless television and magazine images. The images used as the bases for her drawings in this show also come from various magazines. Schleiffert selected significant female faces from this reservoir of images, using wild, garishly colorful, archaic patterns to fragment the smooth, impeccable surfaces of the beauties in the magazines. Schleiffert tattoos the dark side of this insincerely faultless world on the skins of the models: “My Life is a Mess” or “I Want to Change my Life” can be read here.

The exhibition also features drawings from the Empty Drawing Room series by OLAV CHRISTOPHER JENSSEN (b. 1954, Sortland, Norway). Through a spontaneous, intuitive process of painting, abstract forms and signs done in ink and pastels emerge on the paper. After being painted, the paper is waxed so that it achieves a skin-like surface that seems to be tattooed with colorful drawings.

Korean artist SEKYUNG LEE (b. 1973, Seoul, Korea) works with an entirely different, unique technique to design the surfaces of white porcelain objects such as plates, tiles, or other functional objects, using traditional patterns such as those produced by the Meissen porcelain manufacturers. Only a closer look reveals that the artist has traced the motifs with human hair, in detail-oriented handiwork. As a Korean artist, Sekyung Lee thus appropriates motifs from European Biedermeier society, yet at the same time, she subverts its values by using material it would have considered abjectly humble.

MICHAELA MELIÁN’s (b. 1965, Munich, Germany) drawings of Föhrenwald belong to a completely different dimension. In her work, she is concerned with making historical and mental layers visible. Melián went behind the façades of middle-class single-family homes in the Munich suburb of Waldram, once known as Föhrenwald, to research its suppressed history. Föhrenwald was first a forced labor camp where gunpowder and ammunition were manufactured, and then after World War II, a camp for mostly Jewish displaced persons. Melián’s ink drawings capture the outlines of the houses, which have remained almost totally unaltered; she thus refers to the continuity contained within the changing history of this place.

In her colored pencil drawings, THERESA LÜKENWERK (b. 1962) investigates the relationship between abstract color values and the motif of the object on the surface of the image. Lükenwerk often selects images from diving or travel magazines as the starting point for her work. Details of the images — often just body parts — are dissected on the computer into four print colors (red, blue, yellow, black) and thus reduced to their basic visual elements. Working at a luminous desk, she then uses stencils to reconnect the individual dots of each color in the drawing, once again reshaping the motif in a time-consuming process.

A fundamental exploration of the visual surface also takes place in RÈMY ZAUGG’s (b. 1943, Courgenay, Switzerland / d. 2005, Pfastatt, France) work, Reflexionen auf und über ein Blatt Papier (Reflections on and about/over a piece of paper). Two pieces titled Sagen/Handeln (to speak/to act) are featured in the show. Through his prints, Zaugg introduces the different representations of paper, as well as the medium’s levels of reality. A print of a photographed piece of handmade paper, the words “Blatt Papier” and “Malerei” (“piece of paper” and “painting”), and a printed layer of what was originally paint are printed onto real paper in this work, while each individual layer remains visible in all of its uniqueness.