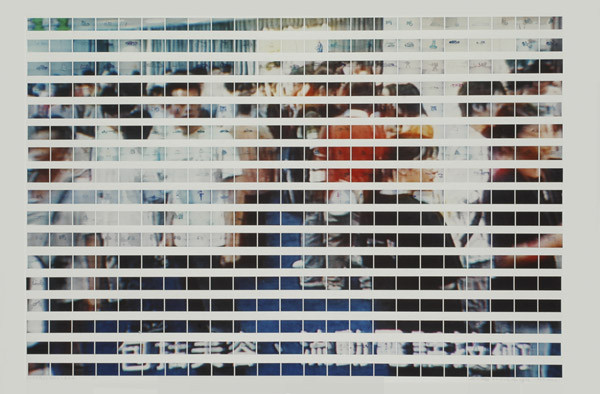 © Zheng Guogu
Ten thousand customers No. 220/10 000, 2005
Color photograph
60 cm x 100 cm
Edition: 1/1
Zheng Guogu is one of China’s most respected contemporary artists. His work has been shown at many international exhibitions in recent years. In 2006 he received the Chinese Contemporary Art Award (CCAA), the most important art prize in China. We are very pleased to announce his first solo show in Germany, which will take place at the same time his work will be shown at the documenta 12.

Zheng Guogu has been known since the mid-1990s for his experimental photography, scrolls, large installations, and public projects. He is interested in the phenomenon of global consumer culture and its influence on Chinese cultural traditions. He is a representative of a very individualized, unconventional subculture.

The artist lives and works in the city of his birth, Yangjiang, a small city in the south of China - an area within Hong Kong’s sphere of influence. Many of his art projects emerge from his local and personal environment. With his camera, he documents his life and the lives of his young friends, and at the same time, stages scenes of fictitious lives. His series, whose visual language is somewhat similar to that of Nan Goldin, feature violence, sexuality, romance, and the lifestyle of a new generation.

With his as-yet unfinished photographic work, Ten Thousand Customers, Zheng Guogu provokes an elitist art system. His photographs are individual works, but he is continually producing them to form a planned series of ten thousand. Despite undergoing an elaborate process of creation, they possess certain aspects of mass-made commodities. Up-to-date TV images are blended with negative-sized photos of models of small toy cars; afterwards, they are cut up and carefully re-assembled. This creates blurred photos that provide ironic commentary on the flood of media stimuli - as well as their fleeting quality - and the mass production of cheap goods. Buyers cannot make their own selections from the pictures; the photographs are assigned. The buyer then has a share in a complete work of art, without having a sense of its permanence or size.

Mass media also inspire Zheng Guogu to create large images that recall calligraphic scrolls. He prints brightly colored Chinese script mixed with English words on paper rolls, or paints and sews them onto fabric and felt. The fragments of text quote advertising logos or passages out of Hong Kong’s entertainment magazines. On the colorful background, they blend to form a composition rich in variety.

Zheng Guogu will present a number of his works, realized in different media and formats, in a new design for the space, created according to the concept of a Chinese garden.