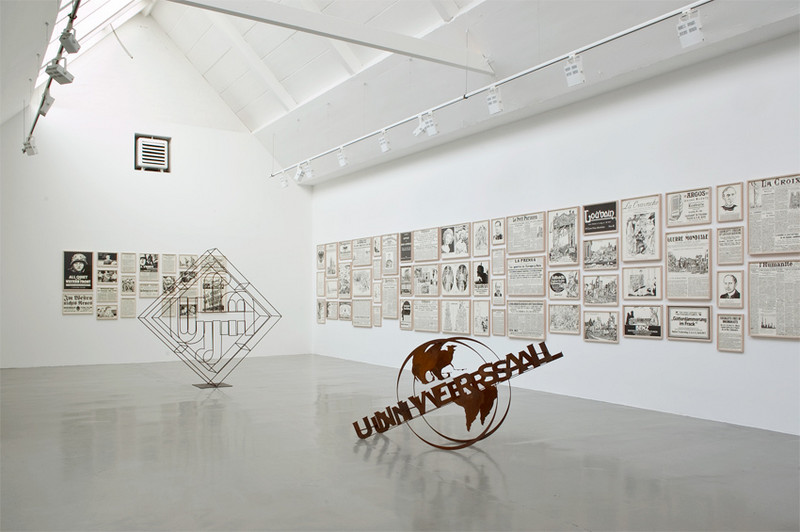 Fernando Bryce is one of the most influential contemporary Peruvian artists. His epic and large scale series of drawings create historical panoramas that depict geo-political themes, ideologies and utopias from the 2oth century until today. His most recent extensive retrospective exhibiton travelled from the Mali museum in Lima to the Malba Museum in Buenos Aires and to the MUAC in Mexico City.

"To the Civilized World" (2013-14) concentrates on images which deal with the propaganda war that erupted following the destruction of Leuven University Library and Reims Cathedral after the German invasion.

The result is a series of ink drawings based on old newspaper cuttings, postcards, posters and other propaganda. The ideologically loaded terminology of "Kultur", "civilisation" and "barbarism" that were used on both sides of the front to disparage the enemy are the central focus of this work. The differences between these re-productions and the original documents reveal how we continuously rewrite history.

In recent years Fernando Bryce has not only analysed the print media, but also looked more and more towards the film industry. The exhibition will also present smaller series, such as "All Quiet at the Western Front", which depicts film-posters, film-stills, as well as cinema commercials. The film productions that Bryce had chosen to work with, demonstrate with fascinating and riveting motivs, the early beginnings of the medialisation of propaganda. Two powerful protagonists in this industry were the film production companies "Universal Pictures" and "UFA", (Universum Film AG). UFA was foundend in 1917 as a German answer to the American competition. The two logos face each other, as large format steal sculptures, resembling emblematic three-dimensional drawings.

18 – 21 September 2014
Wednesday, Sept 17: abc gallery night at Galerie Barbara Thumm, 7-9 pm
Thursday, Sept 18: opening of the abc art fair at Gleisdreieck Berlin, 7-9 pm
One large scale steal sculpture of the universal icon of communism, the "Hammer and Sickel" are being juxtaposed with an ink portrait of Willi Münzenberg.

Willi Münzenberg (1889 – 1940) a German communist, publisher and film producer, was a communist political activist. Münzenberg was the first head of the Young Communist International in 1919-20 and established the famine-relief and propaganda organization Workers International Relief in 1921. He was a leading propagandist for the Communist Party of Germany (KPD) during the Weimar Era, but later grew disenchanted with Communism due to Joseph Stalin's Great Purge of the 1930s. Condemned by Stalin to be purged and arrested for treason, Münzenberg left the KPD and in Paris became a leader of the German emigre anti-fascism and anti-Stalinist community until forced to flee the Nazi advance into France in 1940. Arrested and imprisoned by the Daladier government in France, he escaped prison camp only to be found dead a few months later in a forest near the commune of Saint-Marcellin, France. (source: Wikipedia)