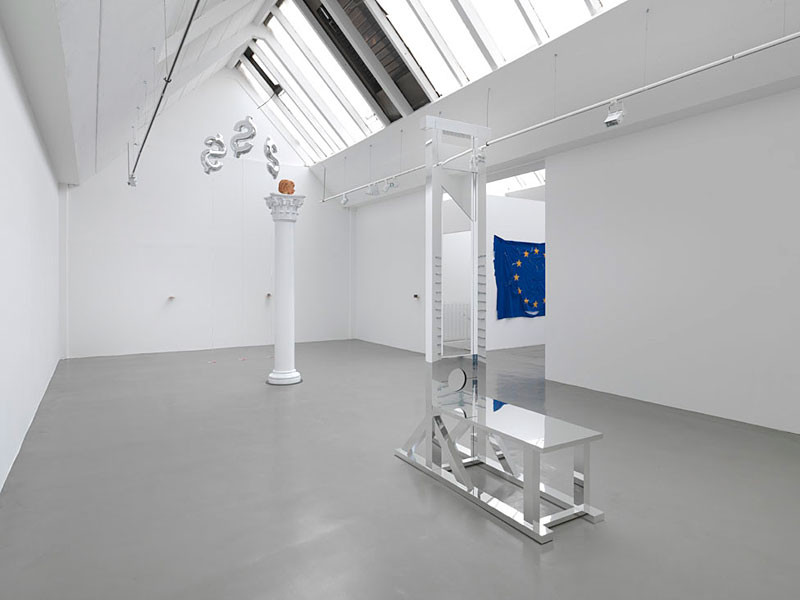 Galerie Barbara Thumm is proud to announce the second solo exhibition by the French-Peruvian artist Jota Castro born in 1965, Lima, Peru) who is internationally acclaimed, controversially discussed and one of the most active artists today to propagate a political activism within his practise.

In the late 1990s Jota Castro brought his career as a diplomat at the United Nations and the European Union to an end and decided to devote himself exclusively to the field of arts, to which he contributes both as a curator as well as a practising visual artist. In 2009 he curated the exhibition "Fear Society" at the pabellón de la urgencia at the Venice Biennial, and most recently the Dublin Contemporary in 2011.

Castro's exhibition at Galerie Barbara Thumm is entitled "AUSTERITY ÜBER ALLES!" and addresses a complex of questions around current problems of the international economical crisis in relation to European politics. Jota Castro created a set of objects which derive their forms from visceral thoughts and visual associations. The artist subsumes the comprehensive and intellectual show's contents in his own words as follows:

The piece LONDON CALLING is the European flag completely torn away and fixed with safety pins: "The ice age is coming, the sun is zooming in. Engines stop running and the wheat is growing thin. A nuclear error, but I have no fear London is drowning – and I live by the river."

MAMMON: "I'm very sorry. I made a mistake. It won't happen again". This is the already famous apology the king of Spain made for going on an elephant hunting trip to Africa. The title Mammon is a term, derived from the Christian Bible, used to describe material wealth or greed.

HÊGÊMON is a Greek word meaning leader state. A greek column with a small surprise on top of it. Hegemony is an indirect form of imperial dominance in which the hegemon (leader state) rules sub-ordinate states by the implied means of power rather than direct military force.

Dollar ballon held down by chinese money. ENTER THE DRAGON is a 1973 Hong Kong martial arts action film starring Bruce Lee. In 2004, Enter the Dragon was deemed culturally significant in the United States and selected for preservation in the National Film Registry. In 2012, the year of the dragon, world economy is as volatile as the gaz in the ballon and in order not to blow away chinese money is anchoring it to the ground.

HERE COMES THE RAIN AGAIN: Whatever happens, whatever the situation, one has to survive. There is nothing more important than the feeling that events will turn out for the best, But this hope suffers the weight of history represented by the stone.

SOMEONE LIKE YOU: These resting handcuffs seem to be waiting for culprits while we are still talking between us to decide who is guilty. The Fear Society scared us to death but did not tell us to whose benefit?“

ZEITGEIST : This « guillotine » represents a radical desire for change. The mirrors it is made off reflect changes that are more visible than effective. The King is dead. Long live the King. Or maybe the king never died and only changed his look! Media are the only one to speak about change, real and significant change and people don't see that change because nothing has changed. People live a very different reality.

SCHENGEN is the turnstile which cannot move. Border checks are carried out by border guards. When performing their duties, border guards must fully respect human dignity and may not discriminate against persons on grounds of sex, racial or ethnic origin, religion or belief, disability, age or sexual orientation.Where there is a serious threat to public policy or internal security, an EU country may exceptionally reintroduce border controls at its internal borders for, in principle, a limited period of no more than thirty days. If such controls are to be reintroduced, the other EU countries and the Commission should be informed as soon as possible. The European Parliament should also be informed.What is threatening public policy and internal security?

BUSCANDO AMERICAS: Up to date version of Cildo Meireles famous work with the Coca-Cola bottles. This work proposes a new interpretation of the political use of this everyday object of mass circulation and consumerism. BUSCANDO AMERICAS symbolizes the ecological disaster provoked in Latin America by the brutal exploitation of raw materials in search of development at all cost.

YOUR REAL MEMORY DOESN`T HAVE TO BE DIGITAL:These drawings show strong images, which we normally absorb without even thinking to much about it. The drawings remind us that digital object may be stored forever but they do not stay very long in our active memory. Do not store away your memory, use it every day. This is one of the artist's leitmotiv.

TREPPENWITZ is the work with the ladder with steps made in bread. This ladder is the perfect example of what is not working in our society. There is not enough bread for everybody. We are not receiving this day our daily bread. There seems to be no way to go upwards."
www.bthumm.de