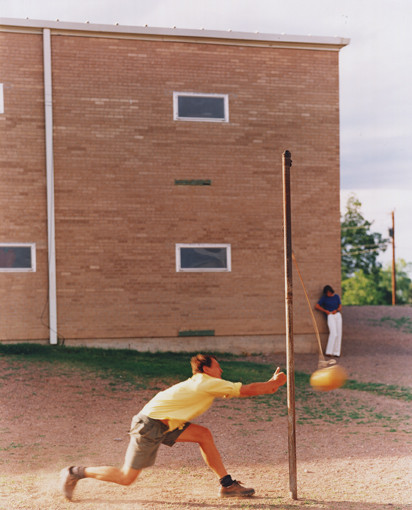 Politically as well as season-wise, this pictorial motif and collective projection just recently had its annual heyday. With loyal adherence to stereotypification and superficiality, its highs and abysmal lows are commentated from one end of the media to the other – and with especial relish when it comes to the celebrities (case in point: Angelina and Brad). Otherwise it serves the needs of general societal prettification and idealization, possesses a coolness factor exclusively for purposes of prestige and is addressed in the ongoing discussion on art – if at all – as a bargaining chip for the success or failure of artistic careers: the ‘holy’ family. It is employed somewhat less popularly for citation in public as an emotional drama, as the setting for interdependencies, power constellations and hierarchies.

The exhibition “Mutti ist Böse” (Mummy is Nasty) is devoted to the greater and lesser ambivalences of the parent-child (and vice versa) relationship. Calling attention to aesthetic and existential aspects, it shows current artworks concerned with the production and establishment of power, with subtle dependencies, misunderstandings, misinterpretations and resistance. Formally and conceptually, the works presented revolve around the elementary conditions of individuality and intersubjectivity, taking as their point of departure the familiar – and at the same time dysfunctional – system of the family.

In the video Berkeley’s Island, recorded right in his own kitchen, Guy Ben-Ner tells about young Robinson Crusoe’s isolated island existence, weaving in ironic references to numerous literary models along with allusions to masculinity, domesticity, dislocation and family. In his solitude, Crusoe (played by Ben-Ner) pursues secret fantasies and activities not entirely kosher, morally speaking. The tranquil island life and the filmic illusion are playfully disrupted, however, by the spontaneous, child-like participation of the artist’s daughter and with it the unexpectedly occurring reality of the father-child relationship, linked with mild threats and attempts of both protagonists to assert certain personal territories. Ann Course shows drawings and animation films focussing on fundamental moments of private and domestic existence such as sex, death, violence and birth. With blatant directness and intensity, her works evoke images of emotional and interpersonal deformations. Far from undergoing any positive transformation, the characters persist as expressions of the most sinister sub-conscious motivations. In her performances, Yael Davids initiates bodily changes investigating corporal consciousness and the human being’s relationship to his or her physical and cultural environment. Absence, fragmentation and abstraction are essential aspects. The video documentation Ball shows a child who, like the literary character Gregor Samsa in Kafka’s Metamorphosis, tries to move in spite of extreme physical challenges, and thus to establish a relationship with its surroundings. Like her films, Jeanne Faust’s photographic works are distinguished by conceptions of apparent omission, incompleteness and negligibility. In the series Familienfallen, the everyday life of the artist’s family is reflected in a manner that is banal but not devoid of lyricism. The dissonance between the quality of a spontaneous snapshot and the possible staging of the situation is never resolved. The photos are captivating by virtue of their ambiguity and, like the moments between the actual pictures, they refuse to reveal their true stories. Oscillating obsessively between eroticism, pornography, fear and violence, the linocuts, collages and drawings by Johnny Miller are restless, sometimes garish and densely composed. Kris Vleeschouwer creates installations in which he uses great simplicity and technical precision to expose unusual interrelationships and surprising dependencies. In 50 cent, a coin-operated rocking horse of the kind typically placed at the entrance to supermarkets has been introduced to the gallery, here in the form of a colourfully painted giraffe. The impulse unwittingly triggered by the spectator turns the innocuously naïve animal into an evil threat of a very special kind.

For further information please contact the gallery at any time.