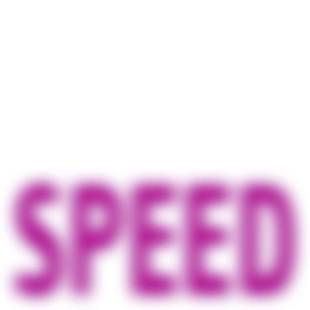 We are happy to announce the group show SPEED: presenting spectacular sculptures by Christian Hoischen and Fiona Banner, a wall-painting by Carlos Amorales, photography by Ann-Sofi Sidén and Heidi Specker, early paintings by Fernando Bryce, a great wall-size installation by Julian Opie and a video work by Martin Dammann.

The gallery entrance is blocked by the colossal sculpture ‚Abrieb und Beschleunigung' by Christian Hoischen. Hoischen's works scratch on the faux facades of the seemingly glossy objects of desire. In his paintings, collages and sculptures every-day-life objects and clichéd status symbols are taken to an extreme. The oversized sportscar mutants with with five rear spoilers, exaggerates the inherent idea of movement.

'The Conquest' by Ann-Sofi Sidén is part of the project ‚3MPH (Horse to Rocket)', a photograph that shows a double figure of the artist posing on a horse in front of a rocket. For this work the artist travelled on horseback for 25 days with an average speed of 3 miles an hour through Texas, from San Antonio to Houston, to NASA Ground Control , home of the lunar landing. The project was born out of the simple question of what it might be like to explore in all its detail a journey on horseback, utilizing this obsolete form of transportation to make the pilgrimage to a site and institution where the future of travel has had the potential to evolve beyond the Earth's atmosphere. A juxtaposition bringing to focus the notions of time and speed.

Amorales developes a very graphic approach in his drawings, also by using computer and vector graphics for his work. He sees this as a tracing of points in space without being limited by fixed size. By working with these chliché-pictures which are repeated and recombined in the drawing process he follows a kind of subconcious working process, without being limited by the tools he uses. 'From the Forest (Airplanes Detail)' is one of his drawings playing with forms like a 'Rohrschach-Test' and having at the same time an apocalyptic air that may have been engendered by global events such as September 11, an over-the-top existentialism of a world gone mad; or by a deep meditation on death and renewal.

Banner's latest body of work highlights the ambivalent reception of media coverage on war as well as the resultant processes of turning "war toys" into demons and fetishes. The large-scale sculpture 'Viking', which is exhibited, is made out of an original part sourced from a fighter jet: the nose of a starfighter. Abstracted and alienated by small formal interventions this sculpture does not reveal its origin at first glance. It reveals itself as elegant, autonomous sculpture as much as an object that trigger conflicting emotions in the viewer.

The paintings of ‚Neo-Heraldik' by Fernando Bryce correspond to basic structures of crests. The formal composition of the images derive from the layout of these emblems. Bryce still deconstructs those patterns by using solely camouflage-colors (such as brown, green, black, white), which disposes all individual attributes. Camouflage is also known in animalities relationship between predator and prey, whereas one masks itself by merging into the background and the other disguises their fast movements by patterns.

Martin Dammann's ouevre includes large format watercolours on paper and video works. A key source for his work often derives from TV or video footage as well as from war imagery or historical archives. The video work ‚Wo' is based on footage Dammann shot at the London airport Heathrow in 1999. It shows the landing of passenger airplanes, while Dammann is trying to catch the point where the planes come out of the cloudy sky. Most of the time, the viewer is confronted with an almost white ‚cloudy' screen, becoming aware of the invisible.

Opie 's sculptures and paintings deal with different categories of modern ways of perception. His wall-size installation derives of the installation ‚Berlin Classics'. The massproduced social housing in Berlin consisted of one characteristic element which is called "Berliner Platte". The Project aims to visually and spacially reinterpret the urban ensembles of these "Platte-buildings". The filmic character of these large-scale picture bands offers a pictorial ground; though it is not one of a linear narrative, but is rather interrupted and shows images as if zapping through landscapes and cityscapes. This passing gaze does not distinguish or evaluate the various elements it sees. Landscapes, streets, houses, all are perceived as equivalent elements of a visual language and unfold a familiar grammar of contemporary environments in front of the viewer.

Heidi Specker's photography questions the relationship between construction and deconstruction in the process of creating the image. Architecture and nature melt together to form graphically composed scenes of energetic luminosity. Her series ‚Im Garten' has recently been shown at Sprengel Museum Hannover, accompanied by a publication that received the book award ‚Deutscher Fotobuchpreis 2005'. At the gallery she presents ‚Zwillinge (twins)'. The timely close sequence between the two variations of the camera position remind us of the fast variations of motorized shutter speeds.